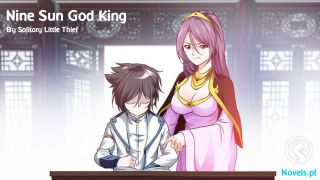 «The Earth Is My Dantian (Web Novel) - Chapter 824: The violent battle against the world

Chapter 824: The violent battle against the world

The battle against the world had arrived. A cold ray of light tore through the sky and landed directly on Wu Mingwu’s position.

The earth directly collapsed. Hundreds of miles of land collapsed and turned into ruins. The enormous impact spread for tens of thousands of miles. The earth’s veins trembled and formed ripples. Finally, all of them struck Wu Mingwu’s body.

Wu Mingwu’s body was sent flying, but he was not injured. He was already prepared. A long spear blocked in front of him, and collided with the Sky Sword. Light shot in all directions, and it was extremely intense.

The first exchange was the collapse of the Earth. It was a scene of the end of the world. Wu Mingwu was sent flying, and the sky sword stabbed into the earth. The four great experts stared into the distance.

A figure appeared and slowly walked over.

Clear footsteps came out from the dust. World War still looked like a human. He was dressed in armor and silver light burst out. His expression was grim as he looked at Wu Mingwu and the others.

“There’s a path to heaven but you didn’t take it. There’s no way to enter hell. Don’t leave this time,”World War said coldly.

He walked in front of the Heavenly Sword and reached out to grab it. The heavenly sword was pulled out and a terrifying aura of extreme dao spread out.

This was the Heavenly Sword, the Magic Treasure of the ten elites of the DAO College. It was extremely powerful and made people look at it with surprise.

Wu Mingwu frowned. He was amazed at how terrifying Zhan Tianxia was, but he was not afraid.

“With the four of us working together this time, even if you are powerful, you will die without a doubt,”Wu Mingwu said confidently.

World War one sneered, “No matter how many trash fish there are, they are still trash fish.”

“No matter how sharp your tongue is, it’s useless. Even if you say all sorts of things, it won’t change the fact that you are about to die,”a person beside Wu Mingwu said with a cold expression.

“To actually give birth to a monster like you in the New Age battlefield, it’s also inconceivable. After absorbing countless corpses, you are a living monster. You shouldn’t have appeared. Your primordial spirit isn’t strong, but you rely on your physical body. It’s simply shameful,”another woman said, she was also the only woman among the four. Her eyes were filled with killing intent. The child she gave birth to had died here. She was the one who was the most furious.

“There are many secrets in the New Age battlefield. Our old ancestor had fought here before. You should know where it is. Tell me.”The last person who was wearing a dragon-shaped armor asked with a peeping tom on his face.

War the world held his sword and waved it. He said, “If your forefather knew that you unworthy descendants had joined the primal chaos, he would probably be so angry that he would climb out of his grave.”

World War shook his head and sighed, “To say such spineless words, it shows how pathetic you four knights are. You actually need to pray to others in order to survive. Not only are you not angry at being a dog, you are even proud. You turn around and ask us who are standing, why don’t you kneel?”? “Why don’t you become a dog?”

“Being a dog makes you wagging your tails and feeling proud. You feel that you are really blessed. No one else can be a dog, but you guys can. You guys are simply too proud.”The corners of World War’s mouth curled up.

“How does it feel to be a dog?”World War laughed coldly. The words that came out of his mouth made Wu Mingwu’s face turn ashen. His eyes were burning with anger. He really did not want to tear world war into pieces.

It was too infuriating. This guy’s verbal skills were simply invincible. Even if Wu Mingwu and a few others joined forces, they wouldn’t be a match for him.

Inside the Pantheon Furnace, Ye Sheng shook his head and said, “I’m afraid only that old tortoise can match this verbal skill.”

Ye Sheng admitted that he wasn’t a match for Zhan Tianxia. If he said it out loud, it would really infuriate people to death.

Zhuge Xiaoming said in admiration, “I want to take him as my master and learn from him.”

“These four horsemen are losing their minds. They are probably going to be angry from embarrassment.”Chi Jun shook his head and said. He also admired Zhan Tianxia’s trash talk.

“They are going to fight.”Du Qingyi immediately said.

The few of them hid in the Pantheon elixir furnace and looked outside without blinking. They were looking forward to the fight.

Once the fight started, they would have a chance to escape.

They could not interfere in this kind of fight. It would be good if they could escape.

Wu Mingwu’s eyes were burning with anger from the humiliation. he shouted angrily, “Today, I will definitely rip your tendons, skin you, and tear you into pieces.”

The other three were also furious. None of them could endure the humiliation of world war. With a Swish, the four of them immediately attacked.

Wu Mingwu directly thrust out a long spear. The long spear was filled with laws that cut through the sky. It had the ability to break through the defense. This was the weapon that Wu Mingwu had found, specifically to deal with World War.

World War’s defense was too high. There was no way to not break through the defense. That was why Wu Mingwu held the long spear in his hand. His speed was very fast, and he thrust it out in an instant.

The other three did not stay idle either. Everyone had heard from Wu Mingwu that world war was very terrifying. Its defense was shocking, so no one dared to be careless.

“Seal the world in ice!”

The only woman had used her own laws to freeze the world. Tens of thousands of miles of land instantly turned into a kingdom of ice and snow. Countless things were frozen.

At this moment, Wu Mingwu’s spear stabbed out.

The spear broke through the defense?

Ye Sheng and the others watched nervously. World War had lost, and they were also in danger.

“Can the so-called ice seal do anything to your grandfather?”World War let out a long cry, and silver light burst out from his body. Wu Mingwu was sent flying, and the long spear was also sent flying. In mid-air, World War pulled out his heavenly sword and slashed fiercely, he wanted to kill Wu Mingwu.

“Chaos Pervades!”The descendant of the other four knights turned into a region of chaos, surrounding World War, and then rapidly shrinking.

World War let out a furious roar. These four people were not weak, and when they joined forces, World War was threatened. His head was pierced by the soul attack, and his hair was disheveled. He looked like a mad demon, extremely berserk.

War with the world’s heaven sword burst out with a sharp killing intent. It ruthlessly cut open the chaotic sky curtain and took the opportunity to escape.

“Eternal Freeze!”However, after coming out, war with the world immediately received a snow attack. He held the Heaven Sword and his eyes were cold and fierce.

“Nine battle swords, Kill!”War with the world instantly turned the heaven sword into nine battle swords with strong killing intent. They surrounded his body and blocked this attack. Then, he held the long sword and slashed down.

The Sword Qi of this sword was 90,000 miles long. It was directed at the only woman, and that was world conqueror.