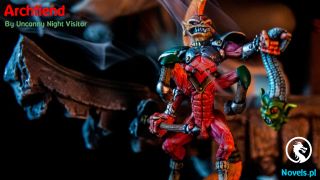 «The Earth Is My Dantian (Web Novel) - Chapter 823: The Army of four knights pressed down on the border

Chapter 823: The Army of four knights pressed down on the border

Xuanwu said to Ye Sheng, “Do you know the origins of the nine battle swords?”

Ye Sheng said, “I heard that they were forged by ten people working together. The nine swords are one, and their power is endless.”

Xuanwu nodded and said, “That’s right, but do you know who the owners of the nine battle swords are?”

Ye Sheng shook his head. He really did not know.

Chi Jun and the others also listened quietly. They wanted to know who the owners of the nine battle swords were.

Old Xuanwu said, “The nine battle swords were forged in this era. Their owners are the ten heroes of the Dao College.”

Ye Sheng said in surprise, “The ten heroes of the Dao College?”

These were the ten great geniuses nurtured by the DAO College. Each of them possessed incredible divine abilities and powerful combat strength. The ten heroes were not from the same era, but each of them had reached the peak of the same era. It was a pity that they had still fallen after that.

Ye Sheng had not expected that the nine battle swords were forged by the ten heroes of the Dao College.

From this, it could be seen that the ten heroes of the Dao College had fallen. Otherwise, their weapons would not have fallen into the weapons burial valley.

“The ten heroes of the DAO College were not from the same era. From the time when the first hero forged the first battle sword, each generation would forge one. Up until the tenth hero, he did not forge anything. Instead, he forged nine battle swords and one, forming a heavenly sword,”Xuanwu introduced.

Ye Sheng nodded. Only now did he understand why ten people forged nine heavenly swords. It turned out that they had been passed down from generation to generation.

“Can we hand the battle swords to Zhan Tianxia?”Ye Sheng asked worriedly.

“You can leave now. I’ll go and inspect Zhan Tianxia.”Black Tortoise stood up. The chains around his body rattled and shook in all directions. They were extremely dazzling and emitted a powerful light.

Black Tortoise’s spirit shot straight into the sky along with the light. It broke through the clouds and rippled the dense fog. It was extremely eye-catching.

When Ye Sheng saw this scene, he could not help but stand up and prepare to leave.

What happened next had nothing to do with him. Whether World War could obtain the battle sword would depend on whether he could satisfy old black tortoise.

With a swoosh, Ye Sheng flew out of the Abyss Pit and arrived on the ground.

World War had already disappeared. He did not know if he had left with black tortoise. Ye Sheng did not see him and did not care anymore. Instead, he walked straight out of the battlefield of the new age.

He still had his own matters to attend to. The descendants of the four knights were all killed and their heads were chopped off. Ye Sheng wanted to start a great war that would affect the universe and create a huge storm that would destroy the four knights.

He wanted to set off a huge wave and cut off one of the claws and teeth of the chaos race.

After leaving the soldier burial valley and getting rid of the threat of World War, Ye Sheng heaved a sigh of relief. No one liked having a great expert who could threaten your life at any time.

Zhuge Xiaoming also said happily, “We are lucky this time. After getting rid of World War, I feel that this person has a strong killing intent and is a ruthless character. If he is rejected, once he takes out his anger on you, we will all be unlucky.”

Du qingyi said, “It can be considered as a blessing in disguise. This time, we have achieved the expected goal perfectly. The descendants of the four knights were all killed, and the kings of the younger generation of the hundred clans were basically wiped out. The forces of the four knights definitely can not bear such a loss. When the time comes, we will send their heads over, and a great battle will feel like it will happen at any time.”

“My uncle is ready. The soldiers he has trained are all fierce tigers. They are just waiting to descend the mountain,'said Chi Jun. .

Ye Sheng looked up at the sky with a deep look in his eyes. He knew that as long as he started this big battle, many people would definitely participate. There were many forces that hated the four horsemen, and there was also a big shot like Chu xiangyu scheming behind the scenes.

“This time, the four horsemen will definitely be destroyed,”Ye Sheng said coldly. He flew quickly toward the exit.

The news of the Four Horsemen’s descendants being killed would definitely reach them very quickly. Once the news spread and the four horsemen descended, Ye Sheng would not be able to escape.

This was also the reason why he was so anxious.

However, even though Ye Sheng was rushing over slowly, the Four Horsemen still took the lead to cross the border when they were close to the entrance of the New Age battlefield.

That small opening was instantly split open by the Four Horsemen’s main force. The leader was Wu Mingwu. His imposing manner was like a rainbow as he suddenly smashed out. It was vast and mighty for 3,000 li. More than half of the people on the New Age battlefield heard the sound.

“World War, come out and face your death!”

Wu Mingwu roared furiously. He was extremely furious and could not hide it. His injuries from before had already recovered. This time, he was not alone. Instead, he brought several people of the same realm with him.

The second generation descendants under the four knights were just like Wu Mingwu. They were all very powerful. This time, they came together to kill World War and sweep across the battlefield of the new age to avenge their son.

An angry roar came from four people, including Wu Mingwu. They were all very angry. Their sons had been killed here, not leaving a single one alive. The descendants of the four knights felt their hearts bleeding.

Wu Ming’s martial arts avatar was 30,000 feet tall. With a stomp of his foot, the earth trembled and the mountains shook. It was extremely terrifying.

“You escaped. Get out here.”Wu Ming Wu roared arrogantly. He was in high spirits. This time, the four of them were working together. They were absolutely not afraid of fighting the world.

Outside, the wind and clouds surged. The earth cracked, the mountains cracked, and the trees collapsed. These were scenes like the end of the world. It was extremely terrifying.

Wu Mingwu and his three brothers came together, and the power they brought was too powerful.

Ye Sheng didn’t say a word. He just watched silently, not wanting to be discovered.

“What should we do? Just wait here. I feel that we will be discovered sooner or later,”Zhuge Xiaoming said worriedly.

Ye Sheng was silent. He was right. Once Wu Mingwu and the others searched carefully, the pantheon pill furnace wouldn’t be able to hide anymore.

However, he had no way now. If he went out, he would die. Hiding here still had a chance of survival.

“Just wait. I hope the heavens won’t cut off the path of others.”Ye Sheng sighed.

Du Qingyi and Chi Jun both frowned and looked worriedly. There was nothing they could do. The gap between their realms was too big.

Outside, Wu Mingwu and the other two began to split up. They emitted a thick pressure that made all the living beings in the new age battlefield tremble, not daring to speak.

He was waiting for someone.

World War had come. Only by delaying these four people would ye Sheng have a chance to leave this place.

Otherwise, Ye Sheng could only hide and hope that he would not be discovered.

The huge waves swept up the yellow sand, the violent winds filled with snowflakes, the spring flowers withstood the scorching sun, and the withered leaves were suffused with killing intent.

The season had been completely changed. This was the power of a peak expert, completely exceeding ye Sheng’s ability.

And in this scene where the four seasons were entangled together, a cold light attacked, decorating the sky. With a swoosh, the sky was cut open.

“Your grandfather is here. This time, none of you will be able to escape.”Zhan Tian had come down, his aura majestic and his fighting spirit overflowing. He had not come alone. He had brought a sword with him.