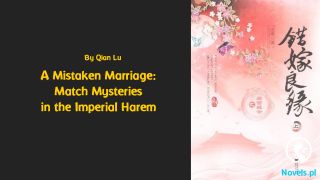 Jack was drunk. He did not have any bad habits. He leaned against the passenger seat and opened his eyes slightly to glance at Mu Yuan. His gaze looked faint. He also did not know whether he recognized him. He asked him dazedly.

“My house!” Mu Yuan smiled. When Ye Ling said that he had invited his whole family, he knew that he was fooling him. This was because the ceremony officiator had come. If their family members also came, it would be a little too high-profile.

Their family did not take sides all along and was rather neutral.

The relationship between him and Ye Ling was extremely solid. The people of his parents’ generation also admired Ye Ling very much. However, by attending the wedding, it would involve some other matters and was not too appropriate. After all, his elders were people who were frequently on the news broadcast.

He also heaved a sigh of relief. Otherwise, he really did not dare to let Mu Yuan call Jack over so brazenly.

“Nonsense, of course, I don’t.” Mu Yuan rolled his eyes at him. If he wanted to come out of the closet, his father would break his legs. His father started mixing in the military camp when he was six years old. He was formidable when he came down hard. He was afraid of him.

Mu Yuan wiped Jack’s face. “Beauty, I’ll bring you to my secret base. I’ll hide my mistress in the house.”

Jack tilted his head to one side and bit his finger. He licked it. Mu Yuan made a ‘tsk’ sound. His little ears had turned red. “If I were a little girl, I would despise you.”

He was too unhygienic.

Jack understood what he had heard and bit him on his finger.

Mu Yuan drove the car into the small compound and parked his car. The effect of the white wine kicked in. Jack was already a little dazed. Mu Yuan supported him down the car. The 1.9 meter tall and well-built man was still a little heavy. It was fortunate that Mu Yuan was a special forces soldier, and he had a lot of strength. Jack was also a special forces soldier. Although he looked very thin, his whole body was made up of muscle. He was also very heavy.

“Have you woken up?”

Jack did not reply. Mu Yuan made a ‘tsk’ sound and touched his face teasingly. “I’m hiding my mistress in the house. I’m bringing a beauty home.”

“Beauty, we have arrived home. If you are not waking up, the bad guy is going to eat you up. Don’t regret it.”

“I have already greeted you. You are considered to have given tacit consent.” While Mu Yuan was supporting him, Jack muttered to himself and even smiled frivolously. He patted his face and felt that he could counterattack. It was a rare chance to take advantage of him or something. He did not care at all alright.

A middle-aged couple stood below his apartment. The man’s face was stiff. He had maintained himself very well. His body was upright, and he was wearing regular military clothes. It accentuated his maturity and prestige. He had a serious manner and was dauntless. The middle-aged beautiful woman beside him was elegant and poised. She was stunned as she looked at Mu Yuan. Mu Yuan’s hand was still on Jack’s face as he was teasing him.

Mu Yuan was so frightened that he nearly threw Jack and made a military salute. After he reacted, he hurriedly supported Jack again. Jack hugged his waist habitually.