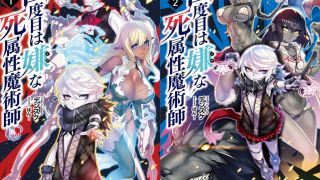 «I Leveled up from Being a Parasite, But I May Have Grown Too Much (Web Novel) - Chapter 71 - In the Mine

The mine of Eigen.

Despite the three of us, namely Ruu, Drai and I, continuing to loiter around looking for something, we still couldn’t find anything.

「Moreover, there’s lots of them！」

Group of bats suddenly started to fly when we’re walking. Though we’re holding our head down, we can’t do too much.

Rather, they’ve come to attack us.

It seems it landed on the unconcious one. The matter of combat against monsters has already ingrained deeply into my body and I’m about to transform into a slightly dangerous man. Now focus, keep your focus.

Nonetheless, maybe because their allies had got scared, the surviving bats escaped to a deeper place. It seems that my achievement has been acknowledged by them for the time being.

「Fuu, it’s rare for a lot of them to come in flocks like this. Could it be that Eiji-san and Ruu-san’s blood’s delicious?」

「The bats here are edible」

Drai started to dispose off the bats while saying those words.

But, I felt like running back as I had a bad premonition on seeing that. If I remember correctly, didn’t those bats have a lot of parasites and others microorganisms on them？ .

「Some varieties can’t be eaten. But, this is the kind that is being consumed right from the past.」

Drai said that as if guessing what I am thinking. Perhaps, the people that come to this village often say such things.

Bat yakiniku with various this and that is served. It’s quite delicious with its cartilage-like crisp texture.

Thus, we begin our search activity again after a short break but, we still can’t find anything. What should I d――Ah, that’s right. Don’t I have the most suitable skill for this situation?

If it’s me who has these two skills 【Stone Gnawer】【Judgement（Earth）】, I can gain information regarding the solids and landscape around this vicinity by eating soil.

When that idea struck me, I decided that I must at least try it. So, I quickly chose the place that seemed clean and tried to eat the soil that was gouged out from the earth wall.

Fumu… It has a distinct sweet flavor, a really refreshing mint-like flavor. I thought that it was not a bad flavor.

「Eh, Eiji, what are…？ Just because you couldn’t get full enough from eating the bats, for you to eat soil is… 」

When I turned around on hearing that voice, Ruu dragged her gaze away from me.

「Y-You misunderstood！ It’s not the case！ 」

「I’m sorry for not being sensible enough… Uhm, I will bring my dried meat too, please take it…」

「Please stop conversing with such a serious tone, Drai-san！Rather, it’s hurting me, you know！」

「It’s my skill, my SKILL you know！It is the kind of skill which lets me know the minerals present in this place！It’s the truth, I’m not lying. Yeah, the sign of rare minerals is―― It’s over there！

I explain my skill to them and then go toward the place where I felt it. Though it was a dead end, when I continued to advance for a while, in front of me was a thin wall.

It made an echo when I tried knocking it.

It seems there’s a natural space existing beyond this wall.

「Maybe we can go inside if we take a detour but――」

「Say, digging it is faster than looking for a road to it. Lend it to me.」

As soon as she says that, Ruu receives a pickaxe from Drai. And then, she nailed it to the wall while raising a manly voice with “URYAAA”.

Making an “I~~~I” sound, the wall is slowly shaved off, and in the blink of an eye, a hole on the wall that has the size of an adult is created.

「Your power is amazing as usual, isn’t it」

We pass through the newly formed hole while thinking that the God-like speech felt more like a young boy’s speech. That moment, Drai raised his voice.

「AH！ THERE IT IS！ It has black silver, and there’s even Magi sapphire！」

When I turn to the place he’s pointing at, at that place is a lump of stone releasing black light. There was also some sky blue stones embedded on the wall.

We hurriedly go there to have a better look at it.

There’s no doubt about it, it was a gem.

「It really was in this place, you’re amazing, aren’t you Eiji-san！」

When I receive their praise………… I feel soooooo goood.

「Hmhm, now you can praise me more, you know」

Those two started to dig the rare minerals that we just found after giving their reply. Kuh, it’s cash huh. … Well, I should dig it too for sure!

「Yes. Thank you very much！」

After we searched for it in several other places after that, we discovered several minerals again. But, it was not in large quantity so far. Well, we got plenty enough in terms of volume for the first day.

After continuing that for few days, we couldn’t get the same amount like the first day but, since we got some【Result】, Drai’s going to challenge by himself again.

And to increasing his cooperative workers, he’s going to invite others with these raw materials as presents.

「As I thought, there’s no way it’ll be that simple, right」

Drai is advertizing in the plaza and bar with the raw materials on one-hand. But, despite calling his acquaintances, it’s not successful.

The chance it’s found is just unexpectedly low, honestly it doesn’t meet the condition of the kind of good prospects that people expect.

It same as before after all.

「Well, I won’t bring you trouble if there’s no change with this. But, this matter is clear thanks to both of you. Now, I can keep going without losing my aspiration」

「Well, if you feel like it, come back to pioneering again. It’ll be okay as long as you make some progress, ri~ght」

Ruu and I said our farewell to Drai in front of the bar―― Or so when we were about to.

The boy, Ston was coming toward us.

Ruu’s having an expression as if being threatened. This guy’s the type that holds grudges huh.

Drai lowered his body and asks him. ド

Drai eyes opened wide in astonishment. Though he tried to say something at that moment, Ston had already run away leaving us behind.

That hateful attitude of him was because Ston was really worried about Drai deep in his heart. All along more than the other people, the things done by Drai… Especially the things he did vigorously again in this village.

「You’re glad right, Drai-san. You have a very reliable ally in some meaning」

「…Yeah. Thank you very much！ If both of you hadn’t come here, I wouldn’t have been able to show my aspiration to Ston-kun. Though I’m saying this when you’re about to leave, please come again anytime」

Of course, Ruu and I nod together. If possible, there might be earth shaking changes when we come next time.

One thing or another, after spending quite a long time we managed to finally find the successor of cooperative workers safely, and we got raw material too. So, I was talking with Ruu that we’d be going toward Prowkai and will depart from Eigen soon.

And then, we sleep at our usual inn.