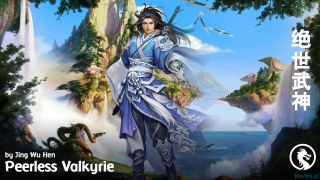 «I Leveled up from Being a Parasite, But I May Have Grown Too Much (Web Novel) - Chapter 61 - Eiji Choukai

I leave the other problems to them and I charge into the forest.

It was the forest east to Laurel which I had come to so many times in the past.

Until the time I was looking with parasite vision that I planted on Grael, the Eye of Akasha was heading toward this place. Though it might no longer be in this place, I should start from this place.

I advanced while defeating the monsters that appeared on the way.

As it was only a waste of time, I ignored them. Those truly reliable adventurers are the ones who’ll do it for me, I’ll leave it to them.

「There it is. It is either weapons or money」

I finally arrived at the place where Grael used the Eye of Akasha.

There are so many things that are scattered in this place even now.

Well then, after this is the real battle.

I’m fumbling around looking for the Eye of Akasha by freely using every skill in my repertoire such as Judgement(earth), voice of spirit, and hawk eyes.

A while after I sharpened my senses and concentration――I found it.

I noticed some faint traces on the plant, ground, and magic particles from which I could guess the general direction of the Eye of Akasha.

I started advancing toward that direction.

The traces became even denser the closer I am to that place, moreover I’m advancing toward the correct direction even if I must adjust my direction once in a while.

In the midst of trees, I saw a hole opened in the air and a shining cube.

I don’t know something like the method to stop it, that’s why I’ll launch one attack with the intention to shatter it.

With that plan in my mind, I quickened my pace.

That time, the hole started to shine.

It seems that the Eye of Akasha in there had noticed that I’m quickly approaching it.

The thing that appeared, accompanied by a powerful roar right after that is the manticore.

When the two manticores faced me, they have those cruel smiles on their faces which I remembered.

Don’t tell me that I must fight those two simultaneously in this place. But, I’ve become even stronger than those days too. Wrong, I am still growing.

I shortened the gap between us while strengthening all of my abilities by using all kind of enchant skills, and then, I lowered the abilities of my opponent with sorcery the moment I approached them close enough.

The paladin shield mastery was effective even with this shield, I could guarantee that my defense power increased by more than 1.2 times(120%).

The strengthened magic shield could perfectly stop the magical bullets.

I did not stop my movements while expanding my shield, I kept getting even closer to the manticores.

I, who approached them with all my power, unsheathed my sword calmly and wield it by my side.

The manticores tried to defend themselves with their scorpion tails―― But, the drawn sword swung by me severed it right into two.

Haven’t I become quite strong.

I needed to muster every bit of my strength to stop it before, but now, I can sever its hard and strong tail with just one hand.

「Next one is your neck！」

I quickly severed its neck to deal with the other manticore.

The sneering expression vanished from the face of the remaining manticore and turned into a shock.

Before that shock vanished, I converged my magical power and fired a magic power bullet to the manticore. That attack came diagonally below the head, it hit the manticore’s neck, and killed it.

The two manticores faded away as particles of light. Different from normal monsters, maybe because they were monsters summoned from the record, they vanished without leaving any trace of their existence.

「Fuu, it’s finished huh. To be able to deal with opponent like these guys, haven’t I, Eiji Choukai, raised my level to the point that I won’t be defeated at all」

This is also the result of parasitizing and parasitizing…… It’s not the time for me to be soaked in the sentiment of my growth.

I must chase the Eye of Akasha which seemed to be running away farther―― the moment I thought of that, it cast a bright light, incomparable to before. Similar light overflowed from the hole, and then what came out from inside is a monster that I never seen until now―― a bi-ped dragon appeared from it.

That guy, whose appearance resembled that of a Tyrannosaurus-Rex, swallowed the Eye of Akasha. No, did it really swallow it? The treasure is going that far to protect itself.

The moss-colored dragon shifted its yellow-colored eyes toward me. It possesses sharp claws in its arms which look even sharper than a sword. Its thick legs stood tall and strong on top of the ground. It keeps glaring at me while putting power into its tough-looking limbs. I take a deep breath and then fixed my stance with my sword.

Yeah, this is a tough one.

However, there isn’t enough time to fight it carefully.

The more time I spend, the more monsters will be spawned. Apart from this hole, it may be summoning monsters from other places too. Though the people who are fighting outside the forest have grown-up, they don’t possess infinite stamina to survive a prolonged invasion.

That’s why, I’ll end it with one attack.

But my opponent is also doing the same thing, we are betting everything in this one attack.

The dragon and I, both of our eyes meet and, both of us raised a scream.

When the atmosphere, which keep intensifying, finally exceeded its limit, the dragon fired a breath of lightning.

I reacted immediately by ordering the earth to erect a wall with spirit magic and created a earth protection. It dispersed the sparks from the purple lightning. [ ED: What! A lightning arrester? ]

I did it, and when the breath attack ceased, I plunged with both my hands gripping my sword.

The dragon raised its sharp claws to the sky to use it to tear my limbs.

Looking at its trajectory at the last moment, I twisted my body with minimum movement so that I won’t be killed by its power while at the same time delivering a blow by incorporating all of my power into it.

The claws and the sword intersected.

Its claws grazed my flank and easily tore away my clothes. But, it was only that much. Its claws did not reach my body, and then my sword stabbed very deep into its green-colored belly.

Screams of its death reverberated inside the forest.

The body of the mossy dragon vanished with a mote of light.

And then, a high-pitched “Kiiiiin” sound resounded as I felt something hard on the tip of my sword.

On the place where the green dragon vanished, a cracked cube fell and then rolled on the ground.

The next moment, the Eye of Akasha started crumbling and became sand that glittered.

The hole opened in the air dimmed, and then eventually vanished―― and then the forest returned to its usual tranquil and quiet nature.

Alie is looking at the forest along with Kohl and the others.

「The monsters have stopped flowing out from the forest right」

「Um~. Is it the calm before storm or else has the storm passed by already――」

Though the monsters had stopped coming out, all the adventurers of the guild weren’t lowering their vigilance yet and kept staring deep into the forest.

After that, someone came out from there as if waiting for them to do that.

「SOMETHING IS COMING OUT―― THAT IS！」

Having left from the forest was the same Eiji who had entered it before.

Kohl, Alie and the others rushed toward him.

「It has ended everyone. This is the cause of all those monsters」

When Eiji opened his palms, the was nothing but sand inside it.

The marvelous-looking sand, according to Eiji’s explanation, was the destroyed Eye of Akasha.

「It shouldn’t be able to summon monsters anymore. The treasure is broken though」

「As expected of Eiji！You’re amazing you know~！ 」

Mimi came with a dash and clinged on to my neck.

When I catch her while staggering due to the force, I see her face as it is.

「You smashed the culprit who spit a lot of monsters of that level, it’s amazing！」

「Ahaha, thank you very much for your praise」

「I also defeated many big spiders and cooperated to push the cocytus wolf. Its the result of the training！ 」

「Hee, so you are undergoing that too」

Mimi separated herself from me while smiling proudly with “fufun”.

It’s good that she’s as lively as usual. And then, she has become really strong.

「Nevertheless, it seems as if you were expecting something like this, Eiji. Did you train us for the sake of something like this？ Though I was wondering why you did this despite not earning a big profit for yourself, had you assumed this would happen？ 」

「No, it’s nothing like that, it’s just a coincidence you know！」

「I guess so, it may have only been a guess if you say so」

「No, it’s nothing splendid or something that great, I swear」

「I wonder though, Eiji’s just that kind of guy. Well, anyway, it’s great that both of us are alive」

At any rate, I bumped my fist with George as the proof that both of us are fought with our best.

In addition, many other adventurers were mutually praising each other’s fighting power too.

It was an extremely reassuring spectacle.

Grael and the aforementioned priest were apprehended in the garrison of the city. They were caught as the perpetrators who caused this incident. With this, it’s the end huh.

I let out a long breath. And then, the usual silence returned to the forest and to the city of Laurel. Everything vanished like the phantom’s projection.