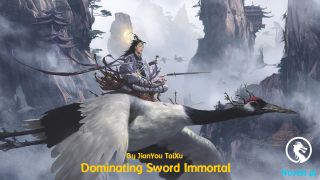 «I Leveled up from Being a Parasite, But I May Have Grown Too Much (Web Novel) - Chapter 48 – The Result of Parasitism

Chapter 48 - The Result of Parasitism

I decided to act quickly. I faced the empty armor and helmet which are moving while handling the lance. As it is, I decided to take the first hit and then, I slashed at the armor with a sweeping movement.

The lance attack that was fired at the same time was avoided and the arms that had been manipulated by it were torn when I had cut them from the armor.

Having learnt many skills, my basic spec increased quite a bit. Or you can say that I increased my ability with various skills, which means that my basic specs had raised so much after being boosted by the last ability that was used. For the current me, I can even evade while following this enemy’s movement.

The lance slipped and fell to the ground due to the severed arm of the armor and helmet set. This is the end―― But as I thought, there’s no way that it will end this easily. The lance started to rise while it was clad in something similar to aura. I thought that it won’t be strange if it was manipulating the helmet and armor with its magical power like that but, from now on, it is the real show.

Though it had attacked first again, the fast moving spearhead was parried by my sword. And, the blade of the sword was chipped. Even like this, the sword was befitting of its quality but, this lance was made of amazing material befitting of a treasure.

Though I managed to parry with my sword and counterattack with the blade, the blade was still chipped a bit. The damage is too severe.

「Be careful, an average weapon will wear out quickly.」I can hear Risa Haruna’s advice from behind. Okay, I had just experienced it myself.

Though I don’t want to parry it’s attack if possible, but a lance that was thrust with an higher-speed was coming to assault me. I barely have any freedom to read it’s attack even while moving, just evading without attacking is already difficult. It seems it was using safe mode when moving with the armor and saving the energy.

「As expected, it seems that I have no choice but to destroy the lance itself, 【Enhance Attack】!」

I enhanced my basic ability by applying enhance type skill on myself. Though I’m also applying sorcery skill to the lance, it’s really not that effective. Since I already had verified that it was effective on an object, it seems this lance has special resistance towards this peculiar type of magic.

Naturally my opponent won’t just waiting silently, it resumed its attack. Its attack is quite merciless but, it is somewhat easy to parry and kill the force behind the attack with magic shield. Though a perfect defence is impossible, it is useful even if it is only for decreasing the speed of the attack.

Thus, while I’m avoiding my opponent attack many times over, I continuously apply the sorcery skill without giving up and, I could see slight response once or twice.

As I though, the lance is incapable of completely nullifying the effect. It seems enhancement with sorcery skill started to show its effect.

It’s a skill which enhances the effect of the sorcery (magic) and but at the risk of returning some curses to myself. Thanks to this, I think that the effect is no longer just zero. But, as the compensation, my ability…… does not fall.

The 【Status Drain】 is a combination skill of special sorcery and enchantment. It absorbs the magical status of the opponent on whom it is being applied. And as a result of it, I can greatly lower the ability of the opponent.

I got into an offensive here. Though my beaten sword had caught the tip of the lance, the blade of the sword did not get chipped and as a result, I can exchange blows with the lance. Now I can attack with this.

As I thought, the magic swordsman style is really useful. It does suit one who uses various skills, just like me. I’m attacking while also defending from my opponent’s attack, but it’s a stalemate as both sides are incapable of landing a decisive attack. It would have been easier if I also had a treasure. Though I have decided to end this battle with sorcery, it is actually very hard to accomplish.

But, maybe I can look for something like a vulnerability. When the spear was moving, I noticed a stone affixed on the tip of the handle that let out a red shine. That was definitely the energy source of the magic lance. The lance fluttered mid air and then took some distance from myself. I adjusted my breath and aim for the timing to perform a counter attack. I decided to settle it with the next attack, so I was enhancing the sorcery even further using my skill.

RisaHaruna said from behind,「It’s already effective! It won’t have any meaning even if you stack even more skills!」

「No, it does have a meaning, Risa Haruna-san. My magical power has decreased」

Right, magical power is consumed when used, even if it had been ineffective. Wasting it is my aim. I had obtained the【Field of Fire】skill during these two months of parasitism. This is a skill which will raise power in proportion to the amount of decrease in magical power and stamina.

I was using my magical power to increase the skill’s power and reducing the amount of magical power at the same time - in order to use skills that increased my ability. That was plenty enough. I’ll beat it with this one attack. At the same time when I was focussing the remaining portion of my magical power, the lance thrust towards my heart. Matching the timing together with the lance, I flipped the attack vigorously.

Though there was no damage on the body of the lance itself, I was aiming at the moment when the lance flips as it tries to change its orbit; With the drop in it’s velocity, it’s defense is reduced. In this moment, I gathered my magical power in the form of a magic arrow and shot it toward the point that is shining red on the lance.

The arrow hit that without inhibition, and the magic stone was broken. The blood-like red light is dispersing the darkness of the night like a firefly. The lance immediately loses its shine and falls on to the ground.

The destruction of the treasure is complete.

「I’m astonished. There’s someone who can destroy that.」The voice from behind is Risa haruna-san. She was clapping her hands in an elegant manner as she approached me while looking at the lance.

「It’s splendid. To be honest, I never thought that an adventurer who received a commission of this rank could somehow pull that off successfully.」

「Honestly the fact is… I do a fairly great job once a while.」

「It seems so. Usually something like a monster or human cannot win against a treasure. It’s praiseworthy. Or feared. Just what kind of a human are you?」

Risa Haruna-san is touching my neck and shoulder as if she wants to check something. Maybe to check the blood. Her serious eyes is, a little scary.

「Fufu, that place is normal. Well then……… the matter is settled but, how about me？ 」

With a complete change in attitude and hiding her smile, Risa Haruna came towards me with a posture indicating that she would challenge, if needed. I tilt my head, unable to understand the meaning of 『How』.

「……You forgot about it. Though you may be a big-shot or just a reckless person, but I should say that you are a wonderful man.」

Risa Haruna was shaking her head while touching her forehead. Even though I was complimented, it can’t be helped since I need concentrate on the battle in front of me. But, basically what’s the big deal about that?

「Nothing special, if you are not doing anything bad, isn’t everything fine even if you’re a vampire? Though you might have been sucking blood while living in the ruin, that’s the matter of the past. Reality isn’t like the content of history book. Much time has passed by and it’s alright if you didn’t do it now.」

I made such a declaration. Risa Haruna was staring at my face with wide opened eyes. That expression of her as if surprised made her look slightly young.

「You’re an unusual fellow. It doesn’t scare you？ 」

「Not at all. I do not think like that. I trust in what I see. Besides, maybe I’m the same with you in some manner.」

Risa Haruna is slowly approaching me. And then, she caressed the nape of my neck with her finger.

「As expected, there will always be something interesting when mixing with the humans. Though it has already been quite long, this is the first time that I am meeting someone like you. I’m glad that I came back.」

She had met various people, but saying that I’m the only one who was special might be an overstatement. Besides, should I say that I’m worried when I’m deemed as “special”? It’s comfortable when thinking about being ordinary in a normal situation.

「It made me want to do a “sampling” after a long time, you know.」

While denying to be sucked, when I asked Risa Haruna about what should be done with the broken magic lance, she said to hand it over as the culprit of the bloodsucking incident as she did not need it anymore. But, she said to take the jewel core as there was still some value to it. Though I see it because it’s on my hand, I can feel great amount of magical power which is the core of the lance.

「Say, could it be that this is a magic crystal？」

「Ah. Since it was used on a treasure, it is a wonderful one with high purity and high concentration. Though it has been broken into pieces, it won’t lose it’s nature. It’s not bad as a reward, right? This is the reward from me.」

Although it couldn’t be found easily, with this, the specially-made magic tools finally have a brighter prospect for their completion. I had been able to test the powers gained with parasitism and I even gained the item that I had been looking for a long time. Thinking that it had been a nice evening, I returned to Snori along with Risa Haruna.