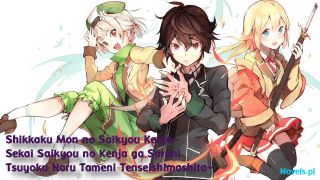 «I Leveled up from Being a Parasite, But I May Have Grown Too Much (Web Novel) - Chapter 41 - Even In Another World It Continues to be a Crime

After securing an inn, Ally and I began to talk about tomorrow, we ate dinner and then each of us went towards our rooms to recharge our batteries.

「A ruin with a vampire who does not exist? But, it seems that there is something which is sucking blood」

The village at the other side of the windows has darkened completely.

It’s already time for George and Mimi to start their work but I wonder if those two will be alright?

Being a bit worried, I changed my point of view to George using 【Parasite・Vision】.

What is projected is Mimi sitting while sheep, horses, and pigs being driven away from a hurried made fortress enclosing a small range.

So this is the way they are going to protect them in the night, eh?

The field of vision sometimes shakes, looking around the surroundings.

But isn’t able to find anything at all. For the moment, nothing is happening yet.

When I change to Mimi’s point of view, it moves up and down slowly, she is dozing off.

Good grief, she is already half-asleep.

To see if something could happen to those two in the middle of their request, I used parasite.

This is one of the good points of being able to use parasite in this way. As expected, it’s useful.

I look towards a shaman who was among the ones I had parasitized, I captured the right moment in which he was piercing a meatball with his fork. A very normal moment.

Next is Ally, I saw her arm extended. her clothes were forming a parabola shape.

The bare skin of her arm was exposed.

The clothes she wore today were being thrown.

Wa-wa-what, could this be? Isn’t she about to step into the bath?

The clothes safely entered into a basket.

Her happy-looking gaze shakes, but because she is looking ahead I can’t see her body.

Suddenly, the view turns around to her back.

Beautiful curves around the shoulders and collarbone, white, and smooth skin enters the field of vision, I saw the corner of a bulge expanding on the left end of the chest,

Even though I’m not close, I hold my breath instinctively.

This is amazing, it’s amazing but, if she were only to see a little more to her lower right… Eh, what I’m saying! This is bad, I’m completely peeping, what I’m doing is not just a crime?

Completely ignorant of my shaking, Ally looks straight ahead, walking to the bathroom.

Because she is looking ahead I’m not able to see Ally’s body right now, but now that she entered the bathroom, the moment she starts washing I’m sure I will be able to see her whole body.

However, it’s not enough if I’m not able to see her face… No, if I don’t release the skill…

Such things like losing to my lust and commit a crime, even a parasite has pride.

I will release my skーーWhy I’m not able to do it?

Before I can make my determination, Ally continues advancing. At last, she laid her hands on the door of the bathroom, opening it.

Just a little more, but I don’t have any more timeーKuu!

Only the wall of the inn was projected in my view.

I was able to hold out until my very limit.

Was I able to finish without leaving the man’s path?

Ah~ Why I didn’t use the skill a bit later?

If I had used it the moment she was inside the bath, seeing her naked skin would have been an act of God. Then I would had an excuse for myself.

I would have told myself that I didn’t see it because I wanted, but because it was an accident so it couldn’t be helped.

…Eh, that line of thought itself is comparatively bad.

After lying down on the bed I close my eyes and try to calm myself down, but it doesn’t seem like the fleeting glimpse of the bare and tender skin I saw would disappear from the back of my eyelids so easily.

I ended up stuck worrying endlessly on my bed.

「Not good, I’m getting distracted!」

It doesn’t seem like I would be able to sleep nor forget.

Let’s for the moment think about tomorrow’s plan. Yes, let’s do that.

A blood sucking monster that is not a vampire, eh… That’s right, let’s try asking Rux.

If it’s Rux, I’m sure she would know something. After all she is a goddess.

I got out of bed and used the skill 【Communication with God】.

In the same way as before, an image is projected in the air. This time Rux appeared normallyーLightly dressed as usual.

I forgot about itーBut could be that this Goddess is the one who creates evil desires?

「Why are you with such appearance!」

Then, she inflates her cheeks.

「Who was the one who called me suddenly, Eiji-run? With what part of my appearance do you have problems, huh?」

Almost to the point of being near the screen, she draws near her face.

She moved back from the camera a little.

「What part, you said? Should I said that you are dressing lightly or perhaps that you are showing too much skin…」

When I started to get nervous saying such things, Rux who was with inflated cheeks suddenly changes her expression to a malicious smile.

「I see that kind of thing. Being said that by a pervert peeping tom is really something else」

Lost at words for a moment, I violently shake both hands, negating.

「What are you saying suddenly!? A pervert, please don’t say such baseless remarks」

「Baseless? You were not keeping something a while ago?」

Again I found myself at loss for words.

Right, Rux has God’s Eyes with her.

It could be that perhaps she saw me in that moment?

「You are wrong, I was able to contain myself totally fine. Because I saw nothing but her collarbone」

「Ah, so you were seeing after all. What a pervert, Eiji is」

「Though I was seeing you, it’s not like I knew with whom you were using your skill, even myself. That you were moving strangely made me think that you were doing something suspicious, but as I expected, you were using that skill. Really, so Eiji also likes that sort of things」

Please stop smiling like you had found a comrade since more or less I stopped myself. However, I thought for a moment how happy I would be if I hadn’t stopped at that moment.

However, let’s put aside that already. At any case, I want to end this topic.

「I didn’t contact you to talk about such things, let’s finish, let’s finish this talk!ーーI thought about asking you about vampires」

「Yes, I’m thinking about how to deal with the monster that is attacking this village. Although not necessarily could be a vampire, it could be some different kind of blood sucking monster. Rux can use God’s Eyes, right? So, couldn’t you disclose their true color with a glance?」

While twining her finger around the thin cloth that she is wearing, Rux swings her body to the right and left.

After displaying a behavior as if she were thinking about it for a moment, she shakes her head.

「Why? It’s something difficult to do?」

「It’s difficult. Even if I can see a place with my God’s Eyes, it’s only the place I want to see. If you tell me to look for something you don’t even know where it is, then I would have to scan over all the world. It’s not an impossible thing to do but, it would take a considerable amount of time」

It’s an easy thing to do if you know the location of where the other party is staying among other things, but if you don’t know even that, it would be a difficult thing to do.

「Moreover, another thing, it’s not good to involve me only because an incident is happening in one of the countless cities of man. It’s unfair and it would be endless」

「I know, but don’t say such petty thing. You even helped me」

「Don’t say pretty! I’m a goddess, you know? I should not be putting excessively my hand over things unrelated to me or the world. Eiji is special because it’s something I did, but I’m unrelated this time. Being a spectator is the best」

Rux said with a serious face which he has the feeling of not having seen it for awhile.

Though I’m talking as if this were not a big deal, but after all, she is the God of this world. She might be right in not supporting specific places or towns.

「I get it, you are right. Then, I will not ask you to go so far. But, it would be enough to at least teach me what kind of things could be hiding there, isn’t that right? About the blood sucking monster. And then I will also teach you about that sort of legends about my world, so what do you say?」

She looks at me while slowly swaying, then she nodded.

「Or should I say that is Eiji is the one who is interested in such things even if it’s not related to the incident, I am right?」

So I was exposed?

Speaking of vampires, there is something that tickles me somewhere in my heart.

「However, if it’s only that, then I don’t have any problem at all. Even I have a little interest about what kind of story Eiji knows. Let’s see, vampire, a giant leech, maxkera… Even in the range of things I know there is a considerable amount. Well, which should I start talking about?」