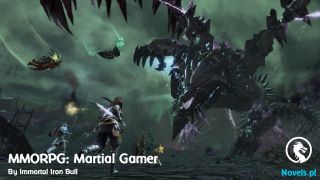 «I Leveled up from Being a Parasite, But I May Have Grown Too Much (Web Novel) - Chapter 34 - For Some Reason, An Idea Came to Mind While I Was In the Bathroom

Chapter 34 - For Some Reason, An Idea Came to Mind While I Was In the Bathroom

After improving my second idea for the parasite skill, I went towards the entrance using the teleportation crystal.

And it was when I left behind the labyrinth and returned to the inn that it happened.

「Uwaa, so dazzling…! This is the same as before」

The same phenomenon as when Hana ate its first meal.

I heard a voice from the light.

While I was in doubt the light calmed down, and what appeared was a body covered completely in leaves, a summoned beast similar to a mop made of leaves.

So this is the evolution of this summoned beast?

No matter how you look at it, isn’t it completely different from before?

However, its eyes were big and round as usual so I’m a little relieved.

「I became able to speak after growing」

Hana bends what it seems to be its chest while making a proud expression.

I never thought it would reach the point where it’s able to speak. The evolution is amazing.

「I want to eat more」

It’s brimming with appetite, but doesn’t that mean it wants to fight against monsters?

If it can hunt alone even when I’m not at its side, then everything is perfect, I don’t have any reason to stop it.

There is today’s level up too, and now that it has evolved so it is possible for it to walk on two legs and use tools with its two hands.

Which reminds me that until now I never let it act alone.

It’s already in the age where it wants to do things alone.

Opening its eyes greatly like a black soybean, Hana stares at me.

As it seems that it also has plenty intelligence, it might have understood to some degree the strength of the monsters that it will hunt today, so I don’t think Hana will do a careless thing and end injured.

In case I’m worried I can use 【Parasite・Vision】 to see its situation, so, yes, I don’t see any problem.

「Yes, you can behave wildly. But don’t kill yourself」

「Of course. Because master made me fight against different types of monsters is that I’m completely sure. Today, all day long, master used his spare time for my sake and fought, supporting me. You even gave me mushrooms. That I was able to grow up was all thanks to master! I’m really grateful」

As if it were a wave, Hana start gradually bending starting from the waist.

Before I was aware, Hana even remembered how to bow. Well done.

「You don’t have to go so far, because it’s tied to my overall strength. Then, take care」

After handing over some simple weapons, armors and medicine, Hana almost fell off started running towards the nearby forest.

When you look at it from distance, it really seems like seeing a mop moving at high-speed.

If from now on it is possible for it to defeat monsters on its own accord even if we don’t go together, then it will really help me earn the income like today in troublesome days.

Let’s leave Hana to take care of everything sometimes when I have spare magic power.

I didn’t go back immediately, but I decided to return after passing through a bathhouse near the inn.

I already sweated all day working hard in the labyrinth, l decided to wash my sweat immediately.

There is a public bathhouse in this Laurel town. Something to be grateful of.

The bathhouse had the atmosphere of being a high class bathhouse.

There is a changing room, and even several bathrooms.

There is a wide bathtub filled with hot water ready to use the moment you enter, and there is also another room with cold water. You can feel refreshed there after using the hot water.

It seems that there is a water service passing under the town, and the water they bring from there is heated. I think that it’s quite amazing technology.

Something that surprised me is that they are using a room filled with vapor as a sauna. The enthusiasm of the people in this world towards the bath is quite impressive.

Normally I finish wiping my body with a wet towel, but sometimes I come here.

Unlike rich people, the common people doesn’t have baths in their houses. Of course, the place where I’m staying doesn’t have a bathroom, so this place is a lifesaver.

First I wash my body and then I enter into the bathtub.

It has a superb temperature… Ha~

I start to relax after closing my eyes, recovering from my fatigue.

As expected, the bathtub is the best. Even though I can feel refreshed with a shower as well, this is comfortable and it heals you. After using it for a while… Fuu~ I can’t get enough of this.

「So you too are a bath lover? What a coincidence, I too」

After opening my eyes to see where the voice came, at my side was a man with red hair and with slightly almond-shaped eyes who I remember seeing before.

The craftsman from the magic tool shop, Felipe.

「I never thought that we would meet in such place」

I wanted to have a carefree day alone, but well, it’s ok to have something like this occasionally.

I heard the sound of the hot water splashing, but because of my mood I was able to forgive something small like that.

「Do you come here often?」

「Well, occasionally. And you Felipe?」

「Needless to say. Coming here is useful for refreshing my head. But what I especially like is the vapor bath. That is something good, you have to try other things beside the bathtub, Eiji」

「I have used it occasionally, but it makes you perspire. If I have to chose one, I like wiping the sweat」

「Saying something like that… Well, maybe it’s early for you」

Felipe lifted his hair, and started laughing as if he had won.

Even I can enter in something like a sauna.

「You are the one who seems to not understand completely the good of the bathtubs. The sensation of the water gently stroking your body… No, it’s useless, this competition. Leaving that aside, how do you do in your work? Were you able to discover how to treat the material?」

After questioning, Felipe splashed hot water on his face.

A long breath came after.

「It’s quite difficult. But even if I say that, it’s not like I don’t know how to use it. As long as I have it in my hand, I will have a breakthrough」

「Is that the truth? So even if it’s difficult, you will be able to manage somehow」

「It’s not guaranteed. Even if I know the way to deal with the material, the execution is difficult. The way I found need a high-concentrated yet high purity magic crystal, but you can’t find something like that easily. Therefore, I started thinking about another method that did not need that, but I don’t know which will be the fastest, obtaining the crystal or thinking of another method. But well, thinking about this and that is interesting」

Broadly grinning, Felipe lift the edge of his mouth.

That expression of enjoyment that come from the bottom of his heart, it’s exactly the expression that ‘The craftsman’ has to have.

Though it’s little strange fellow, his attitude toward the work is the real thing.

Similar to magic, the origin of this particular power is the magic element.

After it’s gathered, the magic element hardens becoming a magic stone or a magic crystal.

With the magic crystal method the purity is higher. So if you tell me that you among them you need a high quality one, then I can imagine how difficult it could be.

「Eiji, you’re an adventurer, right? A capable one to the point where you are able to obtain that type of rare material. If it is so, then go to find a magic crystal」

「Hey, hey, don’t say it so carelessly. Since I was prepared to die. It’s more, if we don’t know where the place is, finding it will beーーAdventurer? An adventurer?」

It could always work to ask an adventurer.

I’m sure they have every kind of information, and it could be possible for them to have what I’m looking.

I think that someone will give me the information I’m looking if I give them a reward, and it could be good to also place a request. It’s likely that depending on the reward, they would look with all their might.

This situation is it not the ‘killing two birds with one stone’?

Unintentionally I clapped my hands together in the hot water.

「Fufufu, no, no, it’s nothing important. It’s that something came to my mind」

I don’t need to place a reward, I only need to help with the request.

Even though I’m restricted by my rank, I can receive requests one rank above mine. It’s only that I can’t do them because of their degree of difficulty.

My turn comes there, I will help them.

If it’s the adventurers of this town, then my ability is known a little. From the moment I defeated the Cocytus Wolf, more or less, the estimation of everyone towards me is low but even so, most of the adventurers believes that I have a power higher than average adventurer.

That’s why I will not present a reward or a request, but in exchange for helping them in their training to improve, I think that I can ask for a magic crystal.

However, the true purpose is more than obtaining a magic crystal, by helping the adventurers, they will be able to defeat monsters above their rank.

And like I did with Hana, using the other way of parasitizing with the adventurers, I will be able to obtain experience from a variety of classes.

Even if the request ends, from now on, to go towards a high rank even if I don’t partake anymore, I need to invite people and make them hunt in excess.

But if I suddenly say things like wanting to help them raising their levels for nothing, they will suspect me. There is no mistake thinking that they will think that there is surely a ulterior motive.

That is the flaw of using the parasite skill in that way. How can I let other people parasitizing off me without any resistance?

But if I say that it’s because the reward or the remuneration?

A man with good intentions is doubted, but they will believe me if it’s something like give and take. This is sad.

I look towards the ceiling where the drops of water are thickly attached.

A drop falls to my forehead hitting me.

That’s why, this can work.

If it’s like this, then I can obtain the two things that I want at the same time.

A magic crystal as a reward for helping, and additionally, I can obtain experience.

Is this not something extremely delicious? Using the double parasitism, I can obtain double the reward.

I can’t do nothing but go, to the adventurers guild.