Support
Random Novel
Back to the Apocalypse 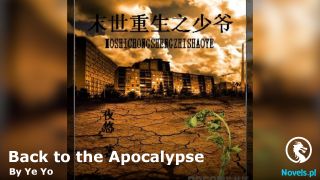 «I Leveled up from Being a Parasite, But I May Have Grown Too Much (Web Novel) - Chapter 2 - The Other World Horumu

Chapter 2 - The Other World Horumu

When I noticed, I was in the outskirts of some forest.

When I look to my surroundings, I noticed that behind me there were only trees standing side by side, and at front a extremely long grasslands expanding upwards on the road.

This is, the other world Horumu?

At that moment, a dragonfly of over 60 cm of length and with six wings, while flapping its wings vividly, flew towards me.

This is a different world, this place.

「Now that I reached this point, I don’t have other choice but to do it」

After I resolve myself, I get up.

But at that time, I noticed that a letter and a bag had fallen on my feet. In the letter 『Read it as soon you wake up! Rux』 was written.

『Good morning, Eiji. I’m sure there are many things that you don’t know, so I will teach you about Horumu. First, you have to pray in your mind to see your status』

You’ve even written a letter for me?

Now that you mention it, I was told many things about the transfer, but I didn’t hear anything about what will happen after that. Let’s read it seriously.

Let me see, to see the status I only have to pray in my mind.

When praying, an image appeared in the air.

And there, this was written.

Uwaa… It’s true, my class is a parasite.

When I look again at my class I think it’s really cruel, for my class to be parasite, even I want to argue that I have at least a fifth of a soul.

My name is, well, it’s simple.

The order of the name and how it’s written has to be the style of this world.

What follows is the ability… I don’t understand it very well. Even if I see the numbers, I can’t say that somehow I understand the general level.

But what I can say that I understood somehow is that my magic specs are better than my body specs. Of course I don’t have stamina, I’m a neet belonging to the indoor faction, a frail child.

What could be the parasite skill?

It’s the same for the class, but I don’t understand very well the effect.

Just like the time when I tried to open the status, I try to pray in my mind on the ability called parasite, and then my right hand started to shine.

Even after not knowing what to do about my shining hand, the light of my hand eventually disappeared. What is happening.

Even if I try to pray, it didn’t appear any explanation about the skill.

What type of skill I would be able to learn in the future or even the details about it, it seems that is useless, even I can’t get to learn the minor details.

Let’s see, I know that is the skill of a parasite, and judging from the name, it has to have some type of parasitic effect.

So that means, from what I understood, it’s that I need to touch something with my shining hand to parasitize something, maybe. I don’t understand what kind of situation I need to use this parasite thing but I will try to use it if I find a person. If I say parasite, there are two type of impressions, the money ones and the one in the houses, that’s why there is no meaning if it’s not a person.

After I thought for a while about the lowest definition possible, I kept reading the letter.

『Were you able to do it?? In this world you will always be able to make visible your own ability. By the way, I’m sure you have realized, to use your ability or your space bag you only need to pray in your mind, that’s why, pray! But if you are not accustomed, you may use your voice. I left the space bag together with the letter, you can use it without reservation.』

I lower my glance to my feet and there it was a small bag.

After picking up the bag, I read the letter, and it seems to be a tool to store various things. When I try to peek inside, I realized that is like the outer space. It’s like it were trying to swallow me up, it’s scary.

According to the explanation, if I want to know what it’s inside I only need to pray and then it would be displayed to me like the status window.

And according to the letter, there are many drinks, food and even clothes stored there. Immediately, I put my hand in the bag, and then I start to pray about wanting to take out some clothes.

Soon, I start to feel the texture of clothes in my palm, and what came out was clothes and shoes.

Oh, this is convenient.

This is the moment when I took notice that magic exist in this world.

This seems to be really interesting, and so for the first time in a while I started to feel excited while I change my clothes and for the ones that I was wearing recently, they were stored in the bag.

The displayed clothes has become something different. Not only letters, the images are also included Ooh, this is useful, useful.

『Were you able to use it properly? The contents of the bag are my offerings to you, so you don’t have to worry and receive them without

receive them without reservation, it’s an extra service.』

That means, these are offerings.

If she is a god, then it’s natural to receive offerings, but, yes, it’s good to receive them?

『It’s normal that the ones who were dragged up to this world can awake three classes, but Eiji only has only one, that’s why… Sorry＞＜。 But, I think you’ll be fine one way or another so please, don’t be so discouraged. Because here is also a good place』

She even wrote this letter for me, and Rux isn’t the one to blame but me, the one who have only one class, and because she thought I would have hard times ahead she gave me tools. In one way or another, she is worried about me.

However, her writing is not very pretty.

After that, I began to read what’s left of the letter, and when I reach the end, she ended it as follows.

『Then. do your best, Eiji. I will act as a god should be and I will be watching over you. P.S. If you happen to see one of my shrines give me a prayer of thanks. Because I’ll be watching you』

「Oh, oh, it’s scary, scary. …Well, let’s get going slowly. Even she said that this is a good place, I will fully enjoy it, this world」

And so, I I took a step forward in this other world, Horumu.