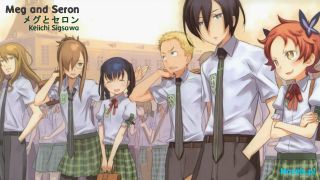 When I opened my eyes, there was that familiar scene.

The end of the world seemed like it was destined as it came as scheduled.

But this time the end of the world didn’t progress that quickly.

Although half of the people had turned into zombies, there was a group of powerful Power Users that protected the world.

Of course, the strongest were the four of them.

No, it should be the five of them.

When the end of the world came again, she became a Power User.

She awakened a power that suited her personality.

Healing powers. Bai Lian Xin had the chance to awaken the same powers in the past.

Ten years into the end of the world, they made their own safe zone and had their own Power User army.

What Qian Si Nai did the most was try to wash away the bloody scenes from her mind.

But every time, Luo Qing Chen shook her head with a serious smile, “I want to keep all the memories with you, whether they are good or bad.”

It was because she had a feeling that they would suddenly get separated, so as long as they were memories of them being together, she wanted them all.

Ten years in the end of the world, killing, blood, and emotions. They loved each other and fought together.

Luo Qing Chen vaguely remembered that before coming back to the Chaos Space, they were in a large scale battle.

Then a white light fell from the sky that Qian Si Nai blocked for her.

The white light was so dazzling that it completely engulfed them.

But how did she die?

When she was puzzled, the system answered her!

[The planet exploded and the host died.]

Although the answer left her speechless, she had to accept it.

She had a bit of regret because she couldn’t properly say goodbye.

[The following is a summary of the previous mission. Host, please properly look over it.]

World: ?Welcome to the end of the world?

[The host’s thirty ninth mission panel is below.]

After that, the image in the bronze mirror changed.

Mission content: [Return to nine months before the female lead died and obtain the love of the male lead.]

“It’s such a high face and figure value! Could it be that I’m going to be an idol again?”

Damn! She thought that it was going to be a bright world last time because of the high face value.

But she never thought……that it was the bloody end of the world!

The system had simply slapped her on the face. Even if she asked this time, she didn’t expect much!

[The host can accept the memories from the system seriously, there might be a pleasant surprise!]

“Are you sure it’s a pleasant surprise and not a shock?”