Support
Random Novel
The Spearmaster and the Black Ca 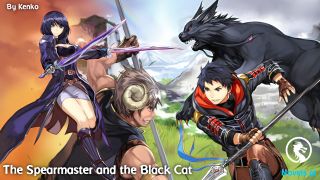 “I’m quite good.” Luo Qing Chen gave a sniff as tears fell drop by drop. She looked at the star chart in front of her and said, “I was good like you said and was a gentle girl, but it’s different from what you said……”

She took a deep breath and her voice was a bit hoarse as she continued, “I received quite a few love letters……”

“Xiu, xiu, xiu.” There was a strong wind around her and her elk hat was blown off.

With a boom, there was a flash of lightning in the sky that lit up the entire star chart.

Luo Qing Chen was surprised as her beautiful eyes filled with a sparkle. She wanted to say something, but she was too stunned to say anything.

There was the sound of wind whistling in her ear, blowing up her red plaid skirt and her curly hair.

Then her phone rang.

It was a familiar ringtone that slowly entered her ears, it was her favourite song recently.

“A story between two people won’t come too late, the people of the past are already different. I don’t know where to go next, it seems I’ll be hurt next year……”

Luo Qing Chen took out her phone and when she saw the name, her heart sank.

“Big sister! Why aren’t you at home?” Luo Qing Mian’s voice was filled with a bit of anxiety as he said, “You’re running around even when you’re sick.”

“I made some porridge for you……” Luo Qing Mian gave a sigh, “Where are you? I’ll come pick you up.”

“No need.” Luo Qing Chen looked up to look at the sky without any lightning and looked down at the dim star chart before calmly saying, “I’ll be back soon.”

When she left the Qian Manor, she turned back every three steps.

Although she told herself not to look back, he wouldn’t appear.

The thoughts in her heart kept telling her to look back again and again!

Maybe, maybe there was a miracle……

But in the end, other than that strange gust of wind, there was nothing else.

On the taxi back, she kept thinking about what to do in the future.

Should she find a way to end her life to return to the Chaos Space for another journey or should she keep waiting.

But he worked so hard for the peace of this world and to give her another chance to live.

If she took her own life, wouldn’t that be letting him down……

She put on her headphones and closed her eyes.

The question kept lingering in her mind until the driver told her ‘we’re here’ three times that she finally came back to her senses.

“Pay and get out!” The driver’s tone was very rough and the pair of rough hands didn’t forget to reach back for the money that she hadn’t paid yet.

“Ninety five, but I’ll charge you a hundred.” The driver impatiently said, “Get out quickly, it really is annoying.”

Other than the initial apology, Luo Qing Chen ignored him and got out of the car.

The rain had already stopped and there was a beautiful rainbow in the sky.

She looked up and muttered, “Do you think that I’m more gentle than when we first met?”