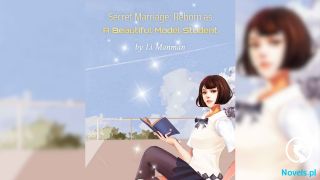 In the end, the five year old girl saved the boy and gave him all her food.

When the boy saw the girl, he felt that his mind had gone blank.

Her eyes were very beautiful, just like a mountain spring. He could even clearly see his reflection in her eyes.

The boy was very ugly at that time, his face was covered in green things that were like poisonous bugs.

Those things kept spreading, from his eyes, his nose, his ears, his mouth, from every part of it like it wanted to split it apart.

He was poisoned with a very rare poison and no one knew where the antidote was. It was said that there was a Spiritual Breath Herb on the Heavenly Snow Peak that would cure all poisons.

He had resolutely headed out from the Nan Chao Country to come to the Heavenly Snow Peak, but he never thought that he would almost die from an avalanche.

“Don’t be afraid.” The girl lifted her slender right hand to touch the boy’s face, “I just wanted to ask if it hurts. You should have been poisoned.”

“You……You know?” The boy had a look of surprise in his eyes, as if he had seen some hope.

“I don’t know what kind of poison it is, but the elders should know.” The girl looked at him and said, “I’ll bring you to the Heavenly Snow Peak!”

In the end, the girl brought the boy to the Heavenly Snow Peak. The elders of the witch race were surprised to see the boy, but then they told him that to get the Spiritual Breath Herb, he had to defeat the large python in the Ten Thousand Snake Cave.

The boy didn’t even hesitate as he entered the Ten Thousand Snake Cave with his wooden sword.

The five year old girl wasn’t assured in letting the boy go in alone and silently followed him.

The boy was seriously injured in the fight and to save him, the girl didn’t hesitate to use the witch race’s sacred technique. The sealing technique on her forehead opened and created a hole.

The boy saw this, but there was nothing he could do. His weakness made him unable to deal with the large python and he could only watch the girl use her life to deal with it.

He didn’t know how long he could last, he knew that when he was about to lose consciousness, his eyes were still open.

When he woke up, the boy was already in a thatch hut outside of the Heavenly Snow Peak.

The poison in his body had been resolved and the ones taking care of him were an elderly couple. Other than him, there were two girls wearing white robes.

With a single look, he knew that they were from the witch race.

“The witch clan patriarch knows the identity of your highness and also knows who poisoned your highness with the Three Insect Three Flower Poison. This time, you owe our witch race. When you become the king of the Nan Chao Country, don’t forget the life saving grace of our witch race’s saint.”

“Is she alright?” That was the only question the boy had.

He suddenly felt that he had changed because he didn’t care if his poison was gone or not, he cared about the safety of the girl.

The two from the which race didn’t reply to this boy and just said, “Your highness just needs to remember what you owe to our saint.”

He didn’t know what that meant, he just knew that he never saw that girl again. He didn’t even know if they were to meet ten years later if he would still recognize her or not.

“How about it? Is it a very touching story?” Nan Yi Sheng raised his right hand and gently touched her forehead.

The peony flower mark was so dazzling.