Support
Random Novel
I Was Caught up in a Hero Summon 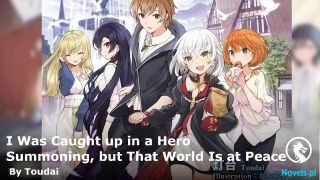 PEI GE did not raise her head, but she could imagine Shen Feng’s expression and suddenly felt tired of it.

Now that she suddenly had a chance to go out, she didn’t want to go out anymore. It was good to stay in the room. Why should she care about that freedom?

He knew that freedom was something he could only dream of, so why did he have to continue like this?

If she had known a few days ago that she could go out and take a look, she would have been very happy.

Now that she had been suppressed for so long, she suddenly didn’t want to go out. Having not eaten for a few days, PEI GE felt her stomach ache just from having a little porridge.

Shen Feng only left the room after she finished eating.

The next morning, Ji Ziming received a call the moment he woke up. It was from the police station’s spy, asking him to go over and have a detailed discussion.

Ji Ziming was about to leave the house when he saw Liu Lina in the living room. His expression turned strange.

“Ziming, are you going to work?” Liu Lina immediately spotted him and walked over to hold his arm.

The anticipation in her eyes made him a little depressed.”Yes.”

“I’ll go with you!” Liu Lina looked at him with a smile.

She suddenly wanted to go to Ji Ziming’s company to take a look, but when he heard that Liu Lina wanted to go with him, his expression changed.

Liu Lina was a little curious, and her smile disappeared. She looked aggrieved. “Don’t You Want Me to go to work with you?”

“No, if you want to go, then go.” He wanted to reject her outright, but a thought suddenly crossed his mind and he agreed to it.

Gu Yu looked a little embarrassed and explained to the two,””Ziming, Lina, your dad and I are planning to go to s city. We might not be home. Take care of yourselves.”

“Yes.” Ji Ziming calmly replied. Since his father and Gu mo wanted to go out, he did not have to worry about them.

Otherwise, they would have to worry about whether Liu Lina would do something to them if they stayed at home all day.

Liu Lina, on the other hand, looked at Ji Ziming and then at Gu mo hesitantly.

“Mom, I want to accompany Ziming to the office. After all, I haven’t been there in a long time and I miss everyone.”

Liu Lina shook her head. Although Ji Ziming did not reject her earlier, she could sense that he did not want to go on his own.

Hearing Liu Lina’s words, Gu mo immediately nodded and told Ji Ziming,””Ziming, Lina’s right. She should go and take a look and familiarize herself with the place. After all, she used to work in the company. Now that we’re a family, she can help you if she goes.”

“You won’t have to be so tired in the future.” Gu Yu said happily. He did not forget to remind Liu Lina,””Lina, we won’t be around for a while. Help us keep an eye on Ziming.”

Since Gu mo had said so, Liu Lina naturally had a reason. She answered naturally,””Don’t worry, mom. Ziming and I have always been on good terms. Just have fun with dad and don’t worry about our family. I’ll take good care of him.”

Liu Lina originally wanted Gu Heng to speak up for her, but now that he had said so, Ji Ziming would have no reason to object. This way, it would not seem like she was being meddlesome.

With that, Liu Lina accompanied him to the company.

As soon as the two of them entered, everyone looked at Liu Lina in surprise. After all, Liu Lina used to work in the company, and she was very capable.

She had always been Ji Ziming’s right-hand man, so now that the two of them were here, everyone immediately began to gossip.

Hearing everyone’s discussion, Liu Lina’s face lit up. She could not help but raise her head as she walked.

The Ji group was still the best. She didn’t have to worry about so many schemes.

Ji Ziming returned to his office and ignored Liu Lina. He told her to take a look for herself while he continued working.

Although he was looking at the computer, his mind was still filled with the matter of the spy.

In the afternoon, Ji Ziming casually found an excuse to go out by himself. Liu Lina listened to him talk about business while she stayed behind to help him deal with the company’s matters.

When they arrived at the place where they had agreed to meet, that person had already arrived.

Ji Ziming asked impatiently the moment he sat down. He did not have much time and must return before Liu Lina noticed.

That woman had also set up many spies around him. If she found out, he might not have a chance.

“Boss, I’ve found out about Shen Feng’s high school days. Take a look at this information,”

Zhang Li passed the documents to Ji Ziming and then sat down at the side. He waited patiently, looking at the man with admiration.

Zhang Li was originally a police officer, and he was also part of Ji Ziming’s arrangement, so he was completely loyal to the man.

For Shen Feng’s matter, he could only help the police with the investigation, but it was half the effort and twice the result.

This was because they had not completed the task that Ji Ziming had given to the others, so they could not find out much about Shen Feng.

Or perhaps, it was completely hidden. This made him extremely surprised.

His face darkened as he continued reading.

It was all about Shen Feng’s past and his high school life. He and PEI GE were actually in the same school and even in the same class.

This gave him a strange feeling, and his mind was filled with her.

Zhang Li immediately called out to him when he saw that he was lost in his thoughts.

He knew that Ji Ziming needed to worry about Liu Lina’s surveillance, so their time together was extremely precious.

If this kind of meeting was discovered, it would be particularly difficult to have another one in the future.

“Yes, I’m fine.” Ji Ziming turned to Zhang Li and said,”‘Shen Feng and PEI GE are high school classmates? The reason he transferred to another school is also because of her. The two of them seem to be distant from each other. ”

This surprised the man. He had never heard her mention this before, so he felt uncomfortable hearing it now.

“In fact, the trigger was the matter that was discovered back then. The school said that Shen Feng’s identity was an illegitimate child, but the Shen family didn’t acknowledge him at that time. As for the reason, I’m not sure because Shen Feng’s mother had already passed away. ”