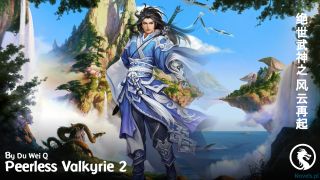 It was not until a long time later that Leaf learned that they were the real emissaries of the Rat God sent by the Ancient Dream Saintess.

It was said that the Ancient Dream Saintess could share her five senses with the emissaries through a secret technique given to her by the Rat God. She could clearly see and hear everything that happened in Black-corner City from hundreds of miles away. She could also directly give orders to the emissaries via telepathy.

Moreover, the Ancient Dream Saintess could straight away “descend” into the emissaries’ bodies through an incredible method. She could manipulate their bodies and display the exquisite art of killing.

It was precisely because leaf’s small team of servants had displayed amazing potential in the fierce battle against the Blood Hoof Warriors that the ancient Dream Saintess accidentally discovered it through the eyes of the Messengers.

The Saintess of ancient dream was deeply interested in Leaf’s tactical knowledge, which originated from Dragon City and was completely different from that of the Tulan civilization.

Therefore, she ‘descended’to Leaf’s side and saved his life and the lives of most of the members of the small team of servants.

“I see. The Saintess of ancient dream has been lurking in black-corner city in this way, but no one has discovered her existence. Even if the blood hoof warriors captured a few temple thieves and Rat God’s messengers, as long as the Saintess of ancient Dream’s will can get rid of these bodies in time, she will be able to come and go freely, and she will be invincible!”

Why was the Great Horn Army so familiar with the situation in Black Horn City? After the continuous explosion of the biogas, it was much better than the poor performance of the Bloody Hoof Battle Group to be able to allocate all the resources available at hand so efficiently.

It turned out that it was because the “Supreme Commander”was personally on the front line to command.

As for the secret method that leaf mentioned, which could share perception and remote control even though they were hundreds of miles apart, Meng Chao believed that it also existed.

The reason was that the ‘Monster Civilization’, the first mortal enemy that the Dragon City civilization faced, was using similar technologies to maintain the operation of the entire civilization.

The ‘Monster Brain’, which was hibernating in the depths of the hidden fog domain and in the nest of the sinkhole, was able to control the monster tide hundreds of miles away without leaving the house.

Of course, the telepathic remote sensing and transmission technology that the ancient Dream Saintess had mastered should be a level higher than the main brain of the monster.

It was because she was not controlling a muddle-headed monster.

Instead, she was controlling a carbon-based intelligent life form with logical thinking and independent will.

If the person under her control were to waver or even resist, the soul that the ancient Dream Saintess had ‘descended’into would probably be met with misfortune, too.

Perhaps, this was the reason why the ancient Dream Saintess had brainwashed all the rats so that everyone would have faith in the Rat God.

Meng Chao was deep in thought.

“Then, the Rat God’s emissary led us through a tunnel and escaped from black-corner city.”

According to leaf, they had followed a special tunnel under the lead of the Rat God’s emissary.

They did not follow the main group to the large-scale teleportation array that Meng Chao had seen before.

Instead, they found a teleportation array that was two to three arms wide and could only accommodate one or two people standing at the same time in a facility that looked like the ruins of an abandoned underground temple.

Although this teleportation array was small in size, the teleportation distance was several times greater than the one that Meng Chao was riding on.

They were directly teleported to the surroundings of the spring that led to the sunken plains and the war drum forest.

Furthermore, they did not hesitate to dive into the war drum forest.

“Wait, so you and the Rat God’s emissary left the war drum forest together?”

He told Meng Chao that in the depths of the war drum forest, there were several secret camps of the Great Horn Army. Many elite rat soldiers who had followed the ancient Dream Saintess for several years were there to welcome them.

Meanwhile, he had also undergone a series of tests in the secret camp, and he had fallen into countless strange dreams.

“Is there a skeleton rat god statue made of white jade? When your blood drips into it and you focus on it, you will see illusions, as if the statue is becoming bigger and bigger until it reaches the heavens?”Meng Chao asked.

Leaf was slightly startled, and then she patted her forehead. “Yes, since you can appear here, you must have passed the entrance test of the White Bone Camp!

“However, there are more than one similar statue. There are white jade, bronze, mithril, gold, and amethyst. There are a total of five statues. It is said that each statue contains a different dream, and it can bring more and more challenging tests to the examinees. Moreover, it will give more and more power to the warriors who pass the test.”

For a few days, he had been immersed in bizarre and unbelievable dreams.

In some of the dreams, he was an ancient warrior whose muscles were bulging and his blood was boiling. He was armed to the teeth by the totem armor. In the fierce collisions between thousands of troops and horses, he had fought countless enemies in the most heroic and tragic manner, he died together with them.

In some of the dreams, he became a gladiator in the ancient arena. He had to face the totem beast with armor with his bare hands. Similarly, he had tasted it countless times. His internal organs were all emptied, his lonely spine was chewed by the totem beast carefully, giving out a strange taste.

In some of the dreams, he seemed to be in a temple full of traps, full of killing intent but containing infinite treasures. He had to do his best to stimulate his courage and wisdom to the limit and “Die”countless times, only then could he find a slim chance of survival in the complicated traps.

Such ‘training in a dream’could extend the training time infinitely by crazily squeezing the potential of his brain cells. In just one night, he could force hundreds of thousands of hours of training into the depths of his brain.

Of course, the cost was also enormous.

Almost every time leaf woke up, he found that at least half of his companions who had been sitting around the skeleton rat statue with him had disappeared.

And where they had disappeared, there were deep traces of dragging and even thick bloodstains that extended all the way into the depths of the forest.

Even if they could barely hold on, the companions sitting cross-legged were often bleeding from all seven orifices. They gritted their teeth, and their faces were filled with absentmindedness, fanaticism, and malevolence. They needed to rest for a long time before they could regain their temporary peace.

As for Yezi himself, he felt as if his brain was boiling with pain.

He wished that he could dig two holes in his temples with a chisel and release the high-pressure magma inside.

At the critical moment, Yezi recalled the methods that Meng Chao had taught him to control spiritual energy and slowly circulate the spiritual veins around his body.

Also, when he was a child, he had found a human-shaped mural with flashing arrowheads on his body in that unremarkable cave deep in the forest behind half mountain village with his brother.

Whether it was when he was young, he followed his brother to practice the flashing mural in the secret cave.

Or when he followed Meng Chao to practice the spiritual martial arts from Dragon City deep in the black prison of the Blood Skull Arena.

Leaf had always been muddle-headed and had only half-understood many of the key points.

Although he had gained the ability to expand and contract his hands and feet in a large area, which was as elastic and resilient as rubber, he was not afraid of the attack of ordinary weapons.

However, such a characteristic was not enough to save his life when he was facing a real expert.

However, under the stimulation of the killing dream and the intense pain in his brain,.

The rat teenager seemed to have suddenly opened his mind.

When the other rat soldiers could not stand it anymore and stopped in front of the bronze skeleton rats that were the most common among the white jade skeleton rats.

Leaf, on the other hand, was like a fish in water. He advanced rapidly and quickly adapted to the third level of dream cultivation that the bronze skeleton rats released.

Leaf, who stood out from the rest, once again attracted the attention of the ancient Dream Saintess after his fierce battle with the Blood Hoof Warriors in black-corner city.

From this, he also enjoyed a higher standard of treatment that was different from the others.

Not only could he obtain a richer high-energy food than the other rat soldiers, but when others were eating dried mandala fruits, he could enjoy the bloody flesh of the totem beasts, he was also able to enjoy the fragrant, sticky, honey-like secret medicine.

Moreover, the ancient Dream Saintess had personally descended into his dream!