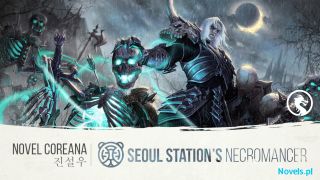 This cold snort resounded through the sky like thunder. At the same time, Qin Yun felt as if the surrounding space had turned into a swamp, making his body unable to move.

A terrifying spatial blade flew towards Qin Yun from the void, directly reaching between his eyebrows.

Everyone in the surroundings shook their heads and sighed when they saw this scene.

Although the power of this spatial blade wasn't that terrifying, everyone knew that Yan Mo was truly terrifying because of his spatial binding divine ability.

Once he was trapped by his spatial binding divine ability, even peak Heavenly God Realm experts would have to wait to die.

In this Giant God Devil Prison, only the six people on the Heavenly God Rankings were able to resist Yan Mo's spatial restraints.

Yuan Shishi, who was far away, saw this scene and frowned. The white palm in her sleeve also instantly clenched, as if she intended to attack at any time.

Xue Kui's heart also rose to his throat. If not for Qin Yun's previous instructions, he would have already attacked by now.

However, at this moment, Qin Yun did not have the slightest bit of panic on his face. Everything was as he had expected.

The giant spatial blade cut through the sky and was already in front of Qin Yun, but Qin Yun was still unable to move.

Just as everyone thought that Qin Yun was about to be split in half by the spatial blade, a scene that caused everyone's eyes to widen.

However, he was unable to enter at all and split this Qin Yun apart.

"This … What exactly is going on? Why isn't this spatial blade moving?" Someone from afar asked in surprise.

Yuan Shishi was also stunned for a moment, not understanding how Qin Yun did it.

The enormous spatial blade floating in front of him shattered and dissipated into the void.

Everyone was dumbfounded. They didn't expect that Yan Mo's attack would be broken just like that.

However, what shocked them was that Qin Yun, who was bound by space, actually moved again. He stretched out his hand and held the Skylight Stone in his hand.

Everyone in the surroundings was shocked. Yan Mo's spatial binding divine ability had actually been broken just like that. Furthermore, he was a peak Earth God Realm divine being. Normally, they wouldn't believe it even if they were beaten to death.

The distant Xue Kui was also extremely surprised. Although he had long expected Qin Yun to be able to block Yan Mo's attack, Qin Yun's actions still shocked them.

Qin Yun looked at the Skylight Stone in his hand, a faint smile hanging at the corner of his mouth.

At that moment, he seemed to have blocked Yan Mo's attack without doing anything. In fact, only he knew what he had used.

Right before he walked out, Qin Yun and Luo Bu Jing had a conversation.

This Giant God Devil Prison was a semi-finished universe created by the Pangu Giant God, so to a certain extent, it could conceal the Heavenly Secrets. Even if Qin Yun used the power of the Initial Universe, it was impossible for Heavenly Might to discover him.

That was why he had walked out just now to test how many levels of strength he had used to defend against Yan Mo's attacks.

Sure enough, in the battle just now, Qin Yun used half of his initial cosmic power to shatter Yan Mo's giant blade and break free from the spatial restraints of Yan Mo.

"Looks like with the power of the Initial Universe, my strength should be around 100 on the Heavenly God Rankings." Qin Yun thought to himself.

Now that he was at the peak of the Initial Cosmos Realm and the Middle Taiji Realm, it wasn't bad that he was comparable to the top 100 on the Heavenly God Rankings.

Once he was able to break through to the late Taiji realm, he would definitely be able to compare to the top ten Heavenly God Rankings in terms of using his initial cosmic power.

This time, he heard Rob say that his perception of Heavenly Might wasn't good, so he used it boldly and relieved.

Qin Yun waved his hand, and an incomparably powerful cosmic force gathered in his palm. This terrifying force was enough to cause the hearts of the surrounding people to palpitate.

Qin Yun slashed with one hand, and the blade that contained the power of the universe flew out, hacking into the void.

With a loud explosion, the void was torn apart, and a figure appeared in front of everyone.

This was a burly man dressed in a red robe. His eyes stared at Qin Yun like a venomous snake with killing intent in them.

Qin Yun's body also emitted an incomparably powerful aura. The aura of Heavenly Might spread out like an emperor looking down on the world.

"Kid, who are you? You're actually able to break through my spatial restraints. You're not simple." Yan Mo said, his voice cold and serious.

'"Your spatial restraints are indeed not simple, but they are not insurmountable. I don't want to fight with you. This Skylight Stone belongs to me. How about we go our separate ways?" Qin Yun smiled indifferently, and his tone was filled with an indescribable domineering aura.

"What if I don't agree?" Yan Mo said coldly.

Qin Yun laughed when he heard this. He looked at Yan Mo and sneered, "If you don't agree, then we have nothing to say. I only hope that you won't regret it later."

Qin Yun's tone was calm, but his words were filled with endless tyranny.

"You're courting death!" Yan Mo was instantly enraged when he heard this, and an incomparably powerful aura surged out from his body.