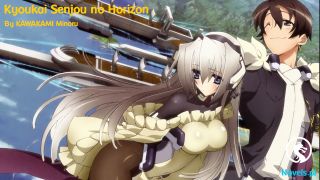 «I Leveled up from Being a Parasite, But I May Have Grown Too Much (Web Novel) - Chapter 94 - Something That Happened Once Is Bound to Happen Again

Chapter 94 - Something That Happened Once Is Bound to Happen Again

When I’m looking at the direction of the room beside the corridor where that sound is coming from, the door of the room opened, and an extremely familiar person comes out.

Beside me, Minan also gasped on seeing the newcomer.

“Suu! Weren’t you in the classroom?”

“Hahaha, just for a while.”

“Or should I say that I was saved by Jackrosa when I tried to save him.”

When Minan displayed her gratitude, Jackrosa replied with his calm smile.

According to Suu, it seems that they were on the way toward the stores after today lunch. It seems they had reached an agreement that Suu will teach him about magic.

At that time, those zombies suddenly raided the academy.

Jackrosa hid himself from those zombies and seeing that it seems that Suu tried to save him, only to find himself being saved by Jackrosa.

“Thank you very much, Jackrosa.”

“Uhn. It’s not a big deal. It’s normal for you to be caught since magic is your strong point.”

“No, it’s not about that. That time, I was scared to death. But, I’m okay now. Let me help you save the other students, too.”

There’s a red tinge on his cheeks and I can feel his passion.

Then, it dawned upon me that he might be the hot-blooded type who becomes excited by such extremely abnormal situations.

This will make things easier, then.

Our number increased with the addition of Jackrosa, making things easier for us.

“Well, let’s do this. The most important point is to hide yourself. Especially for Suu and Minan, don’t force yourself to do the impossible. If you guys get found out by the enemies, just let them capture you.”

“I’m gonna beat them before they can catch me.”

Minan is as hot-headed as usual.

Well, she might be able to beat those zombies with her current power, though.

When I said “I’ll leave the two of them to you” to Hana who was waiting at their feet, Hana replied with a clear “kyu~” voice.

Yup, such a reliable fellow. In spite of it’s cute appearance, Hana’s level is far above any common adventurer. Consequently, Hana is also stronger than the two of them.

We decided to split into two teams to look for the ringleader of this event. Naturally, it’s to increase our searching speed. Jackrosa and I are formed a team while Minan, Suu and Hana are in another team. However, the three person team’s job is to not be discovered due to their fighting prowess.

I should be paired with someone who knows the school very well to prevent wasted actions.

The importance of combat power and the importance of searching power. We split the team to raise our efficiency. Naturally, we were planning to gather information about the situation without being discovered.

“Well then, initiate the operation!”

Thus, we started to make our move.

Jackrosa and I are responsible for the east main building.

“This place is still dangerous since the situation has yet to calm down.”

Since the eastern main building is mainly composed of laboratory and seminar room, the lessons are usually conducted in the western main building. Since the students haven’t gathered in one large room, it seems those zombies have locked them up at separate places.

As a result, some of the students are still hiding with many monsters loitering around.

“Yup. It seems we found them, but the problem is we don’t know whether the students are alright.”

“Let me go first to confirm the situation. Please follow after me, Jackrosa.”

Jackrosa is nodding in silence. I’m happy to have gained his trust.

After that, I use 【Eagle Eyes】skill to sharpen my perception of the surrounding area.

I feel the incoming zombie and the listless person caught by the zombie.

And then, I use【Stealth Walk】after the zombie passes by our hiding place.

Jackrosa is following a while later while being vigilant of the surroundings by using 【Voice of Spirit】.

A while later, the zombie meets another zombie.

I’m searching for a hiding place in the surrounding.

Thereupon, I heard an exchange.

Or should I say zombie communication- is way too similar to human’s. They have human-like appearance, but do they communicate using the same language too?.

“How about your side?”

“No abnormality. No problem. Everything is perfect.”

“You have no problem too, huh. Thank god, then. Don’t you think that it’s about time for Epi-sama to find it?”

“It should be. I wanted to say that it’ll be the best if there’s left hand too, but I don’t mind about it since it’s not like it can’t be found.”

Is that the name of the ringleader?.

Maybe that person is the one who did the broadcast.

Speaking of “discovered”, are they looking for something?.

And then, speaking of the thing they’re looking for in this magic academy-

Let’s meet Jackrosa for the time being.

Thus, I return to the extremely moldy tools room where they kept various things such as fibre of paper, lithograph, chalk, and wand.

“Epi, that is the name of the ringleader of this event.”

“Uhn. I heard the conversation of the zombies. The thing they’re looking for is called “Left Hand”.”

“Left hand. Could it be that they’re talking about the untouchable left-hand?”

Come to think of it, I’ve heard about it before.

The tool being used in the arena was it’s copy.

“But then, why are those zombies are looking for that thing?”

“I don’t know. But I can’t come up with any other idea other than the fact that left hand is in this place.”

I’m sure about that.

Thereupon, they’re aiming at the magic tools storage like this one.

“Speaking of zombies. Do you know about them, Jackrosa?”

As long as we know about the nature of the monsters in this academy, we might know their goal. Jackrosa started to speak after pondering for a while.

“The ones raiding this academy include zombies, ghouls, and I also saw skeletons amongst them, but then, all of them are undead. As for their features, their intelligent is slightly better than an ordinary beast. There’s higher existence leading them, but it doesn’t seem to be a zombie.”

“Then, the owner of this zombie might be someone called Epi.”

“Yeah, we better be careful. Control your movements since that Epi person is even more troublesome than normal punishment.”

Even a fearless person will experience fear. There’s a saying that we can exert more power by uniting our force. Well, as expected, it’s the best if we were not fou-.

At that time, my strengthened perception caught the sound of someone screaming. Or not, it’s more like…

I left the tools room and ran toward the source of the voice.

I’m trying to be as quiet as possible but still fast.

Therefore, upon nearing the source of the voice-

“Found them… We have no choice but to go, huh?”

There, we found a skeleton holding a stick and a zombie with sharp claws.

It seems they were rushing toward someone who seemed like a magic researcher.

“Jackrosa, do you know about those undead?”

“I think they are skeleton soldier and high ghoul. They’re quite powerful.”

When I shout at them, the two monsters and the researcher turned toward me at the same time.

I didn’t bring my sword with me, since I had no intention to fight since the very beginning.

At this time, the skill that I learnt in this academy quite useful.

It’s a skill which I learnt by parasitizing Minan. I make a sword with it and slashed at the high ghoul.

The high ghoul parries my downward slash with its claw.

I attack for the second time.

I kicked at the high ghoul to destroy it’s balance and then finish it. The defeated ghoul raised a painful cry.

“Fuh, they aren’t that strong. But they have terrifying endurance to withstand two of my attacks. Are you okay, Jackrosa?”

A seemingly broken rib was rolling around him.

As expected, a run-of-the mill monster can’t beat him.

“Y-Yes. I was trying to attack those monster when they came for me. It was about turn into a dangerous situation when they started retaliating. Thank you very much.”

Thus, I’m saying the following words with slightly frown on my face.

“Please hide, since it’s dangerous outside. And please don’t show any resistance even when they find you. It seems those monster have no intentions of harming you as long as you’re obedient. Thus, you shouldn’t attack them if you’re not sure that you can win against them.”

“Yeah, I just realized it you know. I learnt a bit about magic, but real combat is a completely different matter as my main occupation is magic researcher rather than magic user after all. Well, I should just hide myself as you say then.”

Then, I tell the man, who has a face as if he just suffered a great disaster, about the tools room we used to hide a while ago, and when he was scrambling toward that place.

“Can I ask you one last question?”