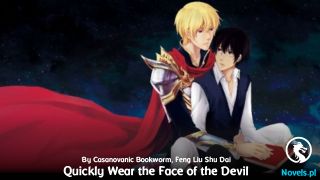 «I Can Track Everything (Web Novel) - Chapter 227: Boundless Sea

‘Why would the Senior Brother need Green Bean? It’s definitely for stealing…I mean, taking something. I wonder where his target is.’

While flying, Yuan Qingtian secretly planned to perform well this time and strive to impress his Senior Brother’s heart.

The thought of Zhang Ji made him perceive extremely under duress.

Zhang Ji’s Nascent Soul realm cultivation level was much higher than his, and he was allegedly the disciple of the Seven Lethal Demon Clan, whose background must be stronger than his.

‘I must work harder.’

He maintained clandestine throughout the entire journey, and there were no mishaps. Yuan Qingtian rushed to the Jade Tripod Alchemy Clan and saw Chen Chen.

Chen Chen glimpsed at him and said, “I’m going out alone this time. Stay in the Jade Tripod Alchemy Clan and cultivate well. Try your best to break through to the Nascent Soul realm as soon as possible.”

Yuan Qingtian’s expression froze and his face petrified when he heard his words, feeling as if he had been dealt with a huge blow.

‘Senior Brother is not going to take me along…’

‘Well, that’s not hard to understand. Now, all the opponents that Senior Brother is facing are Essence Soul realm cultivators, whom I can’t escape from since I’m only at the Core Formation realm. I’ll only be a burden to him.’

Thinking about this, Yuan Qingtian gradually felt depressed and frustrated with his weakness.

“Cultivate well, don’t think too much. The place where I’m headed this time is truly dangerous. I would rather spare you and wrestle the perils alone.”

Chen Chen smiled and comforted while giving Yuan Qingtian many items to enhance his cultivation.

‘I have to spite this kid a little. His Core Formation realm cultivation level is too weak.’

“Yes, I know, Senior Brother, I will cultivate well.”

Yuan Qingtian lowered his head and agreed. Although he was dense, he could still tell that Chen Chen despised him for being too weak.

Having figured that out, he can’t help but be racked with low spirits again.

“You should go outside more often together with Senior Sister Zhou Shu. Having a goal will strengthen your belief in becoming stronger!”

After saying those words, Chen Chen and Yu Qiong bade goodbye to the other disciples and then left the Jade Tripod Alchemy Clan to head to the east.

The Eastern Border was located in the easternmost part of the human territory, and if one were to head further east, they would reach the Boundless Sea.

Rumor had it that there was also the Boundless Sea at the Western Border of the demon territory.

Chen Chen studied geography in his previous life and this world, there was also such a thing as a horizon. Hence, he was almost certain that this world was round.

However, it was much larger than the world.

He reckoned that there shouldn’t be any great discoveries as others would have already found them, given how powerful the Void Refinement realm powerhouses were.

Compared to the inner sea in the southern region of Great Jin, the spiritual energy above the Boundless Sea was quite dense. Although it was not as good as some blessed lands, its standard was comparable to that of the Eastern Border.

The dense spiritual energy was the very reason why there were so many demons under the sea.

Needless to say, there were also treasures.

“Senior, do you want to explore the sea?”

As soon as Chen Chen landed, there was a shriek that appeared from somewhere nearby. He examined the peripherals, only to see a spirit boat stationed on the sea near him. There were three or four cultivators on the spirit boat, all of whom were dressed in gray robes and were waving their hands at him.

Seeing this, Chen Chen directly flew over, and in a flash, he boarded the spirit boat.

Seeing how fast Chen Chen was moving, the few gray-robed cultivators had drastic changes of expression, but they soon smiled again.

“Senior, if it’s your first time here in the Boundless Sea, I can work as your tour guide. We’re more than 1,500 kilometers away from land. The cultivators on the Flying Dragon Island are very familiar with the sea area within 5,000 meters here. With us leading the way for you, you may take a lot fewer detours.”

“How many Spirit Stones do you charge?”

Although he had the system with him and was not likely to get lost, he still wanted to have more contact with the cultivators of the Boundless Sea to deepen his understanding of it.

The leader of the group mustered the courage to say.

Chen Chen glanced at them and could tell that their cultivation levels were all at the Foundation Establishment Realm.

Being able to earn at least a thousand Spirit Stones a day with such a low cultivation level was something that those on land wouldn’t dare to think about at all.

In small vassal states like the State of Jin, even some Core Formation realm cultivators didn’t have that many assets.

Seemingly having seen through what Chen Chen was thinking, the leading cultivator in gray robe said, “We have to pull plenty of connections and use lots of resources to pass this sea without any hindrance. We will directly receive less than a third of the 1,000 Spirit Stones… Senior, please rest assured that we do not mean to deceive you.”

Chen Chen felt relieved. He understood that there were rules in the Boundless Sea too.

“Okay, take me to the east, to the farthest island from here.”

The few of them were shocked to hear his words.

They didn’t expect Chen Chen to have already reached the Nascent Soul realm despite being at such a young age. They thought that he should be the disciple of a certain large clan on the mainland.

Thinking of this, their expressions gradually turned increasingly respectful.

“No problem, Senior, please take a seat inside,” the leader bent his hand and pointed at the interior of the cabin.

Chen Chen didn’t stand during the ceremony either. He simply walked straight in to see that the decor inside was extremely luxurious and worthy of 1,000 Spirit Stones a day. Apart from that, there was also an obedient and lovely female cultivator who should be a maid.

When she saw Chen Chen, she immediately served him formally with some tea.

Soon, the spirit boat began to move. Although it was not as fast as flying, it was much faster than those warships in the world where Chen Chen had come from previously.

After traveling hundreds of kilometers, Chen Chen began to search using the system in his mind.

“System, are there any precious objects within a radius of 50 kilometers?”

Hearing the answers, Chen Chen could imagine the scene under the seabed.

It was the sea area that countless cultivators had searched before. If they were in the depths of the sea…

There would be treasures everywhere!

Thinking of this, Chen Chen’s heart was filled with enthusiasm.

However, he searched again with the divine sense, but the sense is very fuzzy and only a shadow of some underwater scenes could be seen while he felt as if he was looking at the world through a veil.

Divine senses were not as good as the system after all. He wondered if things would change as one’s cultivation level increased.

At this time, the female cultivator came in, carrying several plates of seafood in her hand. She said with a smile, “These are some specialties of the Boundless Sea, it will be our pleasure if you try.”

Chen Chen didn’t stand on ceremony, nor was he worried that it might have been laced with something. He took a few bites, found its taste great, and then complimented it a few times before looking at the female cultivator.

“Aren’t you afraid of encountering evil crooks when running your business? There isn’t anyone else on this Boundless Sea, and your cultivation levels are not high either.”

The female cultivator smiled bitterly after hearing his words that made her face slightly stiffened. “Senior, you flatter us. No one who can make it to this sea will be interested in the meager assets that we have… If we encounter such a person, the island owner nearby would not let them escape.”

Chen Chen didn’t probe further, but he perceived it rather unbelievable.

‘Island owner? Bullsh*t. If I’m a bad goon and kill all of them before throwing their corpses, how can the island owner know anything? If I’m the evil gangster, I won’t even give them a threadlike chance of relaying a message to anybody.’

The female cultivator perhaps said that out of fear.

A pre-boarding identity mandatory registration can easily settle this kind of problem.

However, he had read many records about this Boundless Sea before coming and knew that many cultivators headed to the Boundless Sea for the sake of hiding from their enemies and assassination.

People like them could not have their identities exposed.

Hence, if their identities were registered, their business will lose half.

‘It’s pretty hard on these low-level cultivators too. Their lives depend on whether others have a conscience or not. They’re lucky they met someone like me or else, the consequences would be unimaginable.’

Chen Chen thought to himself and could not help but smile.

“System, who is the most conscionable person within a hundred-meter radius?”

Chen Chen was pleased to hear that answer.

However, after thinking about it, he felt that there seemed to be something wrong.

“System, are there any evil crooks within a 100-meter radius?”

Soon the system listed five answers, and it happened that there were five people in this boat aside from him.

Chen Chen slammed his chopsticks and spat out the food in his mouth.

‘I rarely take sympathy from others and now that I have, it turns out that they’re just a bunch of fake and evil people.’

“Senior, what’s wrong? Is the seafood not delicious?” The female cultivator asked feebly.

“Nothing, it’s just that I’m suddenly in a bad mood.”

Chen Chen stared at the harmless female cultivator and stopped speaking after sighing.