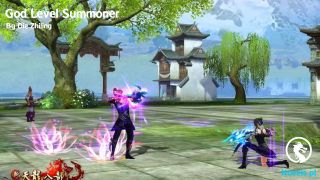 Wang Teng placed Ye Futian in a stand-alone side hall next to the palace where he resided. With Wang Teng’s status, he was already at the top of the City Lord’s Office. He was the master of an entire branch. He had his own complex of palaces that were under his direct jurisdiction.

The place assigned to Ye Futian to stay was very spacious, with its independent cultivation court and maids waiting on him every day as long to help him with daily tasks. This was considered a very generous treatment. Ye Futian was definitely the topmost Renhuang here aside from those cultivators in the Tribulation Plane; he had defeated Pei Yao with just a single strike.

Such an enchanting genius talent ought to be recruited at all cost. If Ye Futian could be used by him, thought Want Teng, it would be most excellent.

After making all the arrangements for Ye Futian, Wang Teng left and told Ye Futian to ask him if he needed anything.

This massive palace seemed quite deserted, as there was only Ye Futian and the two maids.

The cultivation of these two maids was not weak either, and they were good-looking with attractive figures. As a top power of the Ancient God Clan, even their servants were of a superior level to most.

Ye Futian looked at the two and saw the two maids bowed as they asked him, “Sir, do you need anything?”

“No, I will cultivate for a while, and you can go about your own business for now. Just don’t disturb me while I cultivate,” Ye Futian said.

“Yes,” The two maids bowed again, then made themselves scarce without saying anything more. They were clearly aware that Wang Teng’s guests would be no ordinary folks, and all they needed to do was wait for his orders.

After the two left, Ye Futian came to the cultivation court in the main hall. He checked his surroundings with divine consciousness first before he set up a seal to ensure his privacy. He then took out a mirror in which Xi Chiyao appeared.

“Have you arrived in Tianyan City?” In the mirror, Xi Chiyao looked at Ye Futian and asked. He mentioned before that he would be coming to Tianyan City.

“I’m also in Tianyan City, and I haven’t heard anything about you. It’s because you used an alias, didn’t you?” Xi Chiyao asked. Ye Futian was a sensitive subject. If he came in person, it would no doubt cause a great sensation, and everyone in Tianyan City would definitely know.

“You are too daring.” Xi Chiyao looked at Ye Futian with a smile. She asked curiously, “How did you manage to get in?”

“You are Silver Spear Changkong?” Xi Chiyao’s beautiful eyes were full of surprise. She laughed and said, “I was just amazed how such a powerful character popped up in Tianyan City from nowhere and defeated Pei Yao of Yuanshi Palace with a single blow. But it was you!”

Obviously, Xi Chiyao had heard about the happenings at the 13th Flight, but she didn’t make the connection with Ye Futian. After all, not every powerful person that emerged would have something to do with Ye Futian.

“Nothing useful. However, more principalities are coming this time than I thought. The Princess and Spear Emperor Du You ought to be here to represent Donghuang Imperial Palace. Perhaps this is also one of the reasons,” Xi Chiyao said.

Although Xi Chiyao was a woman, she was incredibly bright. Ye Futian knew that from all his interactions with her, so he wanted Xi Chiyao’s opinion for reference.

Hearing Ye Futian’s words, Xi Chiyao appeared thoughtful. “Ask Wang Teng to let you observe the process of armor-making and see who arrived at the City Lord’s Office. At the same time, see if you have a chance to figure out the stance of the City Lord’s Office and whether or not they are inclined to attack the Ziwei Segmentum. If the Wang family has no such intentions, you can remain silent and stay in the shadows, watching quietly. If you think the Wang family might agree to attack Ziwei Segmentum, then it means a battle was all but certain.”

“If it is the latter, with an inevitable battle looming, then you must be the first one to make a move. Find out who will be involved and strike first to destroy them. Then, if you have the opportunity, derail the Armorer Competition in Tianyan City. If they have already decided to form an alliance, then the Armorer Competition this time is some kind of an announcement and must be suppressed. However, it is not easy, and it will expose your true identity, which is extremely dangerous for you.”

Ye Futian nodded. It was indeed very crucial to find out where Tianyan City stood on the matter. If the City Lord’s Office had no intention to invade Ziwei Segmentum for the time being, he could afford to wait and deal with Tianyan City later. On the other hand, if the other was harboring thoughts of malice, then war was unavoidable. If he could suppress them and lower their morale, it would be ideal, but he would need to take action to achieve that goal personally. Xi Chiyao understood this, which was why she said it would run the risk of him being exposed and bring danger upon him.

“Well, be careful. If there is any news, I will let you know,” Xi Chiyao said.

“Thank you,” Ye Futian replied, then put away the mirror and lifted the seal. Ye Futian sat there with his eyes closed, deep in thought.

How powerful would imperial arms be? Could it shake up the entire Ziwei Segmentum?

Ye Futian didn’t think much on the matter and settled down to cultivate.

In the morning of the next day, Wang Teng came to the side hall on his own to seek out Ye Futian.

“Changkong, are you finding everything to your liking here?” Wang Teng asked with a smile. His bearing was extraordinary.

“The armorer competition is about to begin, so it has been quite busy these days as I have to receive cultivators from all over the world. That’s why I did not have the time to come see you yesterday. I have some time today, so how about I take you for a tour around the City Lord’s Office?” Wang Teng said.

“Very good,” Ye Futian nodded. He was going to propose that when Wang Teng suggested it, which saved him some trouble in asking.

“Please,” Wang Teng said. Then a group of them walked outside. Many cultivators on the side were looking at Ye Futian. With someone of Wang Teng’s position, status, and cultivation, to treat Ye Futian in this manner, he obviously attached great importance to Ye Futian. This was Wang Teng himself displaying his stance.

To value Ye Futian so much was probably because of the two impressive strikes he dealt at the 13th Flight.

They came to an armoring palace in the City Lord’s Office. It was scorching hot and full of flaming aurae, like a furnace in the ground, and the entire palace was blazing red.

“The temperature alone is terrifying.” Ye Futian stood inside and thought that if any Renhuang with weaker cultivation were here, he would be incinerated.

Many people were busily working; some were casting while some were tempering, and some were carving matrixes. The sound of metal clashing was heard continuously. Many cultivators bared their upper bodies and were covered in sweat.

“Don’t think that they are just making weapons. For the armorers, it is actually cultivation of sorts.” Wang Teng said, “This is the largest armoring palace in the City Lord’s Office. It can hold 108 armorers making armors at the same time every day. The Great Path Flames underground was arranged by the City Lord himself.”

When they came to the second floor, they could see the entire process of the armor-making below. Besides them, there were other cultivators.

“We have heard of the battle at the 13th Flight, but unfortunately, we didn’t witness those amazing spear techniques,” one person said with a smile; they were also a member of the Wang family.

“Defeated Pei Yao with one strike?” another person asked, their eyes focused on Ye Futian.

Ye Futian realized that this man was someone he actually knew—Jiang Qingfeng, the cultivator from the Ancient God Clan of Jiang, who had fought him once. At this moment, his eyes seemed to fill with intent to battle.

Ye Futian was not interested, but he stood there, locking eyes with the other man, as traces of fighting will permeated from him as if to answer his challenge.

Wang Teng watched quietly as this was taking place. He gave a smile and said, “Let’s go and visit some other places.”

Only then did Ye Futian retract his aura and leave with Wang Teng.

When they walked out of the armoring palace, Ye Futian asked, “Who was that man?”

“Jiang Qingfeng of the Ancient God Clan of Jiang from the Taishang Domain, really strong. My guess is that he wanted to try it out with you.” Wang Teng smiled and said, “I saw that you have a pretty strong fighting will yourself; could Jiang Qingfeng be a threat?”

“Which top forces in the Divine Prefecture have arrived in the City Lord’s Office?” Ye Futian asked opportunistically. He exhibited his fighting will to pave the way to ask this question so it would not appear out of place.

“Many have come.” Wang Teng said, “You have seen the Haotian Clan from Nantian Domain, Infinite Mountains from Boundless Domain, Celestial Worthy Mountain, and the Ancient God Clan of Jiang from Taishang Domain. There are also some other principalities, such as the Shen Clan and the Sun God Mountain. Even the Domain Chief’s Manors from Western Sea Domain and Donghua Domain have arrived.”

Ye Futian listened quietly but laughed coldly inside. Among these principalities, many had grievances with him in the past, such as the Shen Clan, Celestial Worthy Mountain, Sun God Mountain, Domain Chief’s Manors from West Sea Domain, and Donghua Domain. These forces must be the ones that most wanted to see him dead, which accounted for their proactive stance.

“What about other forces? Why are these the only forces that are here?” Ye Futian asked.

“No…” Wang Teng smiled and shook his head. “You will know in a couple more days!”