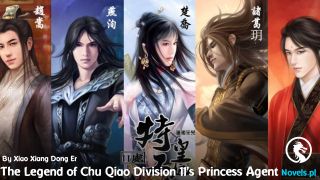 The people from the Taiyu Dynasty didn’t even say an extra word as they left very quickly and looked miserable.

When the horses’ figures completely disappeared, Chu Liuyue then smiled slightly, retracted her gaze, and looked at the two guards. “Go ahead.”

The guards moved a step back each and respectfully invited them in.

Chu Liuyue’s gaze turned slightly deep. Who knows what that Jun Jiuqing is thinking to purposely leave the best villa for me. It looks like he is taking care of us on the surface, but he is actually digging a hole for me. The incident today will definitely spread very quickly. It won’t only be the Taiyu Dynasty; the other two dynasties will definitely be upset when they hear about this.

The weakest people actually got the best residence. No matter what place this occurred in, it would definitely spark a fight. Besides, this is related to each dynasty’s reputation! Who knows what trouble it will bring?

He is purposely pushing me to the front of the crowd… But… Chu Liuyue squinted her eyes. Since the other party is blatantly teasing us, then I’ll just take it as it is!

She extended her long legs and walked through the door.

“Liuyue, do you know Beiming’s Crown Prince? Why did he do this?” After entering the villa and seeing how exquisite the surroundings looked, Mu Hongyu couldn’t help but lean in closer and ask softly.

Chu Liuyue shook her head. “I don’t know him. I’ve never seen him before.”

“Then, why did he do this?” Mu Hongyu surveyed her surroundings and faintly felt worried. “This place is good, but won’t doing this openly be putting us on the chopping board?”

Chu Liuyue smiled. Even someone with a direct personality like Mu Hongyu could see through the other party’s intention, which proves how direct his plan is.

“It’s a waste to refuse the advantages brought to your door.” As Chu Liuyue walked, she lifted her fingers. “Quite a few Beiming emperors have stayed here before, and this is truly a place where the dragons convened. Since so many of them liked this place so much, it proves that this place is different. Not to mention the others, this villa alone has a ninth-grade Xuan formation, and we’re already benefiting from it. If we cultivate here, our cultivation speed will definitely be elevated.”

“That’s right! Since the others have already stepped all over us, why must we take it lying down? Yue’er is right. We’ll just stay here!” Elder Su Jin’s eyes shone brightly as she spoke and quickly walked inside. “I’ll go see how the Xuan formation is. Yue’er, remember to copy down the previous few Xuan formations for me!”

Once she said this, her figure disappeared.

“Hey…” Xiao Ran wanted to call her but glanced at Chu Liuyue hesitantly.

The latter couldn’t help but smile. “Mentor Su Jin has always been addicted to Xuan formations and won’t care about anything else once she starts looking at them. Elder Xiao Ran, please help look after her.”

Embarrassment flashed across Xiao Ran’s face, but he still glanced at Chu Liuyue gratefully before chasing after his crush.

Jian Fengchi shook his fan and looked very carefree. His icy eyes were filled with curiosity and nosiness as he looked at Chu Liuyue. “Hey, do you really have nothing to do with Jun Jiuqing?”

Chu Liuyue glanced at him coldly. “I can allow you to have something to do with him.”

Jian Fengchi felt a chill run down his spine as he immediately retreated. “Haha! I was just making a joke—a joke! Actually, Jinghong was the one who asked me to ask.”

Just as he was about to defend himself, Jian Fengchi covered his mouth. “Go, go! Let’s go and cultivate! It won’t be good if we humiliate ourselves when we compete with the talents from the other dynasties!”

He then dragged Yuwen Jinghong along and rapidly left.

Even though he wasn’t the weakest among the few people that came, he vaguely felt that they had a lot of potential. Just by staying together for a few days, he could already feel an obvious improvement in their auras.

This made him nervous and secretly determined to cultivate even more!

Chu Liuyue smiled and nodded. Wu Ming is a Tian Ji Residence disciple and is an outstanding talent. The more important thing is that he’s stable and serious. This was one of the reasons why I brought him over. Seeing his behavior, he clearly felt a sense of danger, so he planned to cultivate properly and strengthen himself. This is definitely something I’m pleased to see. Being able to stay here is more beneficial for cultivation. Perhaps we can gain an advantage in future battles.

Wu Ming acknowledged her and left.

Mu Hongyu then followed Jian Fengchi and the others, planning to duel with them. She had recently learned a new move from her mentor, and her hands were itchy.

After the few of them left, Elder Chen Ke asked rather hesitantly, “Your Majesty, are… you really not worried? There are benefits to living here, but…”

He felt that this journey seemed to be unsettling… It vaguely seemed like someone had arranged everything in advance.

Chu Liuyue raised her brows slightly, and her eyes were filled with cunningness as they dazzled with a harsh gleam. “What’s there to worry about? I dare to come to Lin Zhou, and I also dare to live in this villa!”

She walked forward with her back straight and her aura formidable! “No matter what kind of demon or fiend it is, I’ll be able to stop it! I’m bent on taking the benefits of living here!”

This hunting ground was very spacious, and its periphery was surrounded by a tall barrier made from superior metal. Every barrier was the size of an adult’s thigh, and they were neatly arranged with a hook above. If one wasn’t careful, a large piece of their flesh would be hooked out.

Upon closer look, one could still see spots of blood on the barrier. It had already been a whole day, and the blood spots had started to dry.

Some seemed to be newly left behind and were very red.

Other than this, there was a barrier above the hunting ground that covered everything within. Flying creatures or fiends wouldn’t be able to escape at all!

At this moment, someone was lying in the center of the hunting ground.

Fresh blood spewed out of his neck and drenched the entire floor as he lay there motionless. He hung onto his last breath, looking as if he was going to die soon.

If not for his chest that was still heaving slightly, one really would’ve thought that he was dead. But in actual fact, the current him was better dead than alive.

This was because a black and white bird was using its claws to rip open his chest and swallow his heart!

At the side, the few fiends gathered and greedily watched this scene. Even though they kept salivating, they didn’t dare to take a step forward.

This was because a man was standing outside the barrier!

“Your Highness, the Tianling Dynasty’s people have already moved into that villa,” said the guard that quickly went forward and went down on one knee respectfully.