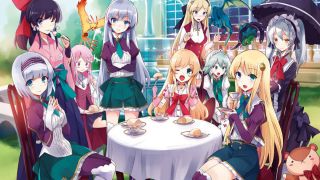 Fang Yun quietly wandered in space, alone. In these ten years, he didn’t bother to return to the cultivation universe. At this time, he closed his mind and allowed his body to wander in space.

After an unknown period of time, Fang Yun finally recovered. Suddenly, the picture of his mom dying appeared in his mind again. Even after so many years, his heart shook upon remembering that scene.

“The heavens and the earth are so big, but where is home?”

Fang Yun sighed internally. He can travel between universes now, but he still couldn’t find a single place he could call home in both of them.

He has no home or family. He is alone.

After another seven or eight years, Fang Yun finally decided to return to the Metaverse, but before that, he decided to take a final look at his sister.

Yingzi has become quite old. Fang Yun saw that Yingzi and her family were not very rich, so he tried his best to help them this time.

After all, although he couldn’t use his cultivation base to help them spiritually and physically, his mental power can still be used to search for things.

He gathered dozens of pounds of gold and some treasures from the ocean, then secretly gave them to Yingzi’s family, which is enough for them to live a wealthy and fulfilling life.

After confirming that Yingzi and her family’s lives were back on track and that the sudden influx of wealth wouldn’t cause any drastic change, Fang Yun decided to leave.

He wondered about the extent of change in the other universe. The Metaverse league has already had deep contact with the outside world before he left. One or two hundred years have passed. It’s unknown whether it has flourished or perished.

Fang Yun returned to the chaotic space he crossed from, then was about to communicate with the giant turtle, but at this time, he discovered that a fixed space channel appeared in that chaotic space.

Looking at its appearance, this space channel can only be used once; Moreover, if it weren’t for the turtle’s spiritual imprint on his body, he wouldn’t be able to discover its existence.

Fang Yun felt a little anxious. He didn’t know why the giant turtle would do this. This wasn’t their previous agreement.

The giant turtle promised that it would always wait within the proximity of the channel. When Fang Yun wants to come back, he only needs to connect with the spiritual imprint of the giant turtle and the latter will immediately know of his intention.

The giant turtle has violated the agreement. At least it left a stable space channel.

At least 100 or 200 years have passed on the other side. It shouldn’t be strange for the giant turtle to temporarily leave.

However, after spending so long with the sea turtle, Fang Yun learned that that little guy is not only lazy but also very patient. He felt that this kind of possibility was very low.

“I should go and take a look first.”

Fang Yun thought internally. He used the spiritual imprint left by the giant turtle on his body, then slowly took control of the space channel.

The spiritual imprint of the giant turtle is necessary to enter this space channel, otherwise, the channel would immediately collapse if someone enters it without the imprint.

This giant turtle is very cautious. After his intelligence has grown, he has learned from Fang Yun’s behavior and handling methods.

After communicating with the imprint for a while, the spatial channel in front of Fang Yun immediately quivered slightly. At the next moment, the spacial channel burst out with a brilliant light, then swallowed Fang Yun in the next second.

Fang Yun allowed the white light to swallow him, then set off on a new journey.

In the past ten years, Fang Yun didn’t cultivate nor did he eat a lot of things, so his cultivation base hadn’t changed much, still a third step sage. At least, he has gained a level in the past few years, so technically he did grow.

Of course, there is definitely no way to compare with his progress back at the cultivation universe. After all, if he remained there, he could enjoy hundreds of years of cultivation and growth. Especially if he remained in the Metaverse league.

Of course, many people think otherwise.

During these two hundred years, the Metaverse league has developed fairly well. As it is now, Luo Feng has abdicated, giving way to the third leader of the league, Doro.

Compared with Luo Feng, Doro’s talent is much worse. In fact, his talent might be even worse than some of the brightest geniuses in the league, like Wu Chen, Luo Chen, etc…

Of course, his talent is still top-notch, just a bit worse than geniuses of that class.

However, Duo Luo possesses great control and management abilities. This is the reason why Luo Feng decided to hand his position over to Doro, relieving him of his responsibilities and giving him the time and peace of mind to cultivate with confidence.

However, after abdicating, Luo Feng decided to return to his previous position, maybe even take a more dangerous one. While most political leaders are too afraid to do so, Luo Feng naturally dares to do this.

For example, Luo Feng has taken the post of an outer general, holding the power and position to launch wars against other nations. His army contains a total of several million people, all of which are headed by Luo Feng.

To be honest, Luo Feng is really suitable for this position.

With his strength, previous position, and charisma, he can actually choose whatever position he wants.

In addition, Luo Feng is an immortal-class cultivator and not an ordinary one. If Fang Yun hadn’t left, there would have been three great masters above the immortal level.

In addition to Luo Feng, there is another person who has reached the Immortal class. Although it is only the initial stage of the Immortal rank, it is enough to make everyone within the metaverse feel excited.

This person is neither Wu Chen nor Luo Chun, but a dark horse that has suddenly emerged.

Both Wu Chen and Luo Chun have reached the peak of the world master level, and they are at the critical point of breaking through.