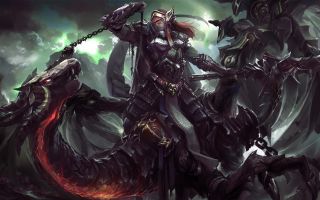 “I see.” Felix nodded in understanding as he watched Cyclope walking towards a solar flare.

Although they were exposed directly with the sun, it didn’t seem like anything was affected inside the forge.

Felix could still breathe and move normally. When he got used to the light, he finally figured out how was it possible.

“What kind of glass is capable of surviving in this hellish environment?!” Felix’s eyes were widened in disbelief after spotting a screen of thick glass separating them from the sun.

As the metal primogenitor, he was the only one with enough understanding of metals to start creating new unique varieties!

After Cyclope put some distance from Felix, he extended his palm forward and manifested a towering black crucible[1].

Then, he molded it with two metallic pillars made out of Salamander Metal…While the pillars remained unchanged, the crucible started to turn extremely red like it was about to melt off.

However, no matter how hot it turned, its shape remained the same!

“Just extraordinary…” Felix mumured in awe at the capabilities of metal element in the right hands.

Just like gemstone and sand element, metal elementalists were capable of commanding any kind of existing metal in this universe.

There was an unfathomable number of unique metals in this universe.

‘Why doesn’t Cyclope have any descendants?’ Felix asked this burning question.

He believed that if Cyclope had any descendants, they would have been considered to be in the top twenty at least with their element.

Unfortunately, there wasn’t any metal elementalist in this universe besides the beasts, and humans, who integrate with said beasts.

‘He had descendants just like the rest of us, and they were pretty active during the early years of primogenitor Era.’ Lady Sphinx shared, ‘Too bad, at the end of the primogenitors Era, their numbers had been diminished to an extinction level.’

‘But, why did Cyclope allow it?’ Felix frowned, believing that Cyclope shouldn’t be that coldblooded to see his race going extinct and not do anything about it.

‘At that time, he was too consumed with deciphering the divine codex and forging divine equipments.’ Thor remarked, ‘We barely saw him even when he was forging our stuff. Don’t even mention his descendants…He completely secluded himself.’

‘The final nail in the coffin was when he entered the illusion world to recover his mental health.’ Lady Sphinx added, ‘What remained of his race were utterly erased by unforgiving time.’

Felix knew that the universe was extremely hard to live in at that age. If an already weakened race was left all alone without their guardian, their only fate was damnation.

Felix focused back on Cyclope after seeing him dumping what remained out of Mjölnir inside the crucible…Even though the broken pieces were as big as mountains, the crucible was still wasn’t filled to even half.

“When you’re just trying to make great content at NO VEL B IN.Com.”

Next, Cyclope beamed some of Felix’s materials from his spatial ring…Naturally, it was Cyclope’s main spatial ring, so it was immune to the heat and possibly most other elements.

‘Oh, he didn’t throw in ancestral dragon scales.’ Felix commentated after seeing that Cyclope had mixed in only three materials with the broken Mjölnir.

“Now, we wait until everything is melted off and mixed together.” Cyclope informed after he returned to Felix.

“How long will it take?” Felix asked.

“A couple of days or more.” Cyclope answered.

“It would have been taken even more than a century, if the divine codex was still written on the hammer.” Cyclope shared.

Well, it did make sense that for a masterpiece like Mjölnir to have an insane level of toughness that even a star would struggle to melt it off.

“Let’s get out of here.” Cyclope walked away and Felix followed him shorty.

After they left the main forge, both of them reduced their sizes back to normal…Still, Cyclope was a verified giant.

“If you want to leave, you are free to go.” Cyclope permitted with a faint smile, “I will call you when I finish writing the last divine letter on it.”

“How long will it take to forge the complete body without the divine codex?” Felix asked with a curious look.

“Then, I prefer to stay and watch it happen if possible.” Felix decided.

Felix was already told that structure of the weapon was the easiest part to handle and took no time to finish for someone like Cyclope.

However, writing the divine codex on every inch of such a humongous weapon was the real challenge. The worst part? If Cyclope made a tiny mistake in his writing, he couldn’t just erase it and try again.

He required melting off the finished structure and start all over again from scratch!

That’s why the process would take a century give or take as immense focus and dedication had to be preset to bring this masterpiece into life.

“By the way, have you made up your mind on what abilities you want your weapon to have?” Cyclope shared, “I can’t start writing the divine codex until I know the full picture.”

“I am still quite indecisive about this.” Felix sighed in frustration.

He was told that he could have ten unique abilities on his hammer…He was given a list of possible abilities for this specific design to choose from.

Naturally, Felix had already picked a couple of similar abilities to his crescent axe as he had already established a well put fighting style around them.

The first one was the boomerang ability that allowed Felix to throw his axe anywhere and return to him without needing to control it manually.

The second one was its ability to take the sickles’ form.

That’s why he was asked to get world tree first root as it would allow him to split the axe and the hammer into two separate weapons and wield them from a distance with his vines.

The last one had to be the targeting ability as it ensured that his weapon would seek his enemy even if he threw it behind him.

He had no need for the rest of the abilities from his crescent battleaxe.

As for the abilities from the given list? He naturally picked the size manipulation ability as it allowed his weapon to match any size he picked…In turn, making it useful in all situations.

Felix had trouble with the remaining six abilities.

“I am torn between choosing single elemental amplification or a universal one.” Felix asked Cyclope, “Which one do you think it’s best?”

Felix was having difficulty making a decision since those two abilities had varied strengths and weaknesses.

In the case of single elemental amplification, he could choose poison, lightning, or gemstone to be amplified by his weapon.

The amplification would be on a crazy level, making him capable of turning normal lightning into another version capable of blowing off an entire planet!

This was what Mjonir had.

On the other hand, universal elemental amplification would allow Felix to amplify any element he selected to add in the divine codex.

This would allow him to amplify all of his elements equally. Though, the level of power up wasn’t comparable to the other ability.

“That’s not for me to decide.” Cyclope shook his head, “You should come to your decision after studying your fighting style and how would it develop into.”

“I will allow you a month to think it thorough.” Cyclope informed, “I will be starting writing the divine codex then when I finish with the blueprint.”

“How else do you think abilities can be utilized by weapons?” Cyclope chuckled, “Do you think I just write some random sentences, and they will work? A calculated blueprint is a must to connect all sentences with each other and the rest of the materials.”

“Only then would it work.”

“Sounds like a lot of work.” Felix said with a tone filled with admiration.

He really couldn’t imagine anyone capable of going through all of this trouble and time for the sake of creating a weapon that didn’t even belonged to him.

What’s even more commandable was the fact that Cyclope wasn’t getting paid for any of this!

He was literally going to spend an entire century of his time to forge this weapon just because of a favor from an entertainment game!

If he wasn’t extremely passionate about his work, he wouldn’t have accepted such a thankless job.

“I will make sure to give you the list of my decided abilities before I leave here.”

Felix promised, knowing that the sooner he made a decision, the easier it would be for Cyclope to create the blueprint.

“Make sure to have no regrets.” Cyclope warned, “The moment I receive the list, there is no modification.”

“I understand.” Felix nodded with a solemn expression.

[1] Metal container in which metals or other substances may be melted or subjected to very high temperatures.