Support
Random Novel
The World After the Fall 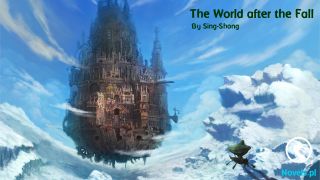 The instant he reached the sphere with his enlarged hand, the green sigils grew more frisky and swirled like newborn saplings in spring.

At the same time, they unleashed plentiful nightmare energy into the sphere.

When bathed under the energy, the escaping sphere suddenly became “tame” and remained still, whereas the dream around Angor stopped fading away and was now growing stable and solid as before.

As Angor watched in bewilderment, the green sigils began replicating themselves and slowly left his hand to wrap the sphere up like ropes.

He then tried dragging the sphere back to him like pulling a lasso, and he succeeded without a problem. It seemed he could still control the sigils as he wanted.

He suddenly had a strange feeling upon getting his hand on the sphere that told him why the sphere refused to fuse with him earlier.

The glowing sphere was the embodiment of the nightmare domain he was working on, which originally relied on the Nightmare Realm to exist. When the nightmare tunnel was cut off, he had to find a new “footing” for the nightmare domain so that it did not randomly escape to somewhere else. At this rate, if he failed to situate the new nightmare domain properly, it was likely going to stray to an unknown spot in the Dream Realm and vanish.

However, the green sigils around his right hand now acted as a pseudo nightmare tunnel by constantly sending nightmare energy into the surrounding area, thus convincing the sphere to stay. And when the embodiment of the nightmare domain was stabilized, the dream wasteland also stopped dissolving.

Angor always believed he had to accept the nightmare domain using his own body, but not like this.

With the help of the sigils, he successfully affixed the sphere to his body. Yet he could tell that the sphere was still controlled by the sigils, not him.

Frustrated, he pulled the sphere out again.

He currently had no idea what these green things were. Sunders’ research did not reach any useful results regarding this matter yet, while he always tried to avoid looking at them because each time he did, he felt as if a pair of creepy, crimson eyes were staring back at him from another dimension.

He had a hunch now. Those eyes might belong to Shava, the blond stranger he just saw.

For this reason, he would like to avoid using the sigils as they might get him involved in something terrible.

But now he had no choice. He needed the sigils to capture the domain sphere.

“What happened to your right hand might not be a bad thing. On the contrary, it could be a great destiny.” Sunders’ voice echoed in his mind.

Back at Phantom island, Sunders once showed Angor a mantis scythe he transplanted as well as mentioning many more foreign body parts on his flesh.

“This is both for strength and research. When I’m done with this arm, I can always remove it and get a human one. You can do the same. When you’ve performed enough research and are satisfied, you can chop it off and grow a new hand. Remember, wizards are capable of the unimaginable.”

Angor took a deep breath to contain the uneasiness swelling in his mind.

He was reminded many times that wizards were destined to go after mysteries and learn about them instead of running away. Staying inside his comfort zone might keep him safe for the moment, but he would always have to face challenges later, and he had to be prepared for them.

Determined, he gazed at the green sigils on his hand.

The hallucination of those crimson eyes appeared again, but instead of getting terrified, he grew curious.

He wished to know more about the sigils. As the “owner” of them, he was naturally at an advantage. Hopefully, he could learn their secrets when Sunders could not.

It took a long time. When his physical body outside sent him a warning that he needed to wake up soon, he finally found an initial result regarding the strange sigils.

Rather than learning something, he felt as if the sigils acknowledged him as their master and granted him the knowledge.

He saw a strange shape.

At first, it appeared similar to a spell model. But on a closer look, he noticed that the “model” was incomplete. It looked like building blocks piled up by a child, who then removed a critical piece from it.

While showing him the model, the sigils also sent him a brief message, which was “contain”.

He tried telling the sigils to activate this “contain” effect, and he was glad to see that the sigils responded by rapidly absorbing nightmare energy again.

“So this is how my right hand drew the energy? But where did the energy go?”

It took him several days this time to reach the next result, which was a second model that seemed to be related to the first one.

He tried combining the two models he found into one, but he was disappointed to notice that something was still amiss.

Like the last time, an unknown awareness told him that the second model was “tunnel”. After going through “contain”, all the absorbed nightmare energy reached this “tunnel”.

Going down this path, he found a subsequent third model, which was “door”.

To his disappointment, he could sense this door, but he could not control it. Although he didn’t need to examine the door further to infer that it might be an entrance to the Nightmare Realm and where the nightmare energy went after the green sigils took it.

As for why the door refused to heed his command, he believed he either needed to grow in strength or receive more “privilege” from Shava.

The three models he discovered combined together still looked like the tip of an iceberg. He wondered what the whole picture would look like.

He returned his attention to his right hand and chose another sigil, which always remained at the center of his palm.

Again, he discovered an incomplete model that suggested “release”. This time, however, he almost immediately saw the second and the third models following behind it, which were “tunnel” and “door”, similar to what was signified by the first sigil.

Just like the last time, he was stumped at the door, which refused to move no matter how he tried.

It was clear that the two sigils and the significations they held all indicated the “functions” of his right hand, which was to absorb and release nightmare energy.

Since he could check these functions by reading the sigils, he decided to look at the domain sphere and see what the rope-like sigils that entrapped the sphere meant.