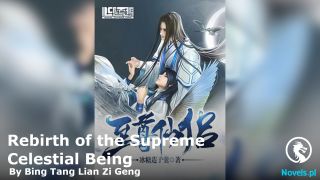 Meanwhile, the western region of the Floor consisted of fields covered in large amounts of snow and ice, even in early summer. This region was also notable for its mountain ranges that, like the rest of the region, were covered in snow.

Rozen came out of the Labyrinth while playing around with Saichou and Hanachou while walking toward the 55th Floor’s Main Settlement, Granzam, also known as the Steel City.

Because, unlike other towns that were mostly built of stone, the main buildings of this town looked like a tower made of steel, shimmered in black luster.

Many Players who made their living from production Skills like Blacksmith, decided to settle on this town since this Floor prospered in smelting and gold carving, but there was no tree whatsoever on the street, making the wind that blew around the town even colder in this season of autumn.

Rozen marched through the city under the gaze of other Players while reading the latest report in a newspaper.

“Knights of the Blood, the Clearers’ guild will set up a new headquarter at the newly unlocked 55th Floor?”

Upon reading the news, Rozen couldn’t help but scratch his head and shrug.

“Choosing this place as headquarter, is he that obsessed with giving the impression of cold steel?”

After nearly a year since Knights of the Blood joined the rank of Clearers, the number of Clearers has dramatically increased since then.

There were about a hundred of them if those who usually didn’t attend the strategy meeting were included.

And Knights of the Blood has replaced several of their members who fell behind with stronger Players, but ultimately, their number still remained the same.

Although there were only dozens of them, Knights of the Blood’s strength was beyond doubt. All their members were competent.

Asuna, their vice-leader, has earned the nickname “Flash,” not to mention their leader, Heathcliff, the only Player who had a Unique Skill even now.

Some of them believed that Knights of the Blood was stronger and more suited to be SAO’s strongest guild.

In fact, there was barely any gap between them in terms of strength.

Both of them had only a few dozen members, while one of them was exclusively for beta testers, the other one was particularly strict in terms of recruiting, so each and every single one of their members was strong enough to be the top Players.

Both guilds also had their respective exceptionally strong Players who should be easily fit into the top five Players.

Red Wings had Kirito and Rozen, whereas Knights of the Blood had Asuna and Heathcliff.

Kirito and Asuna were equally strong, although Kirito might be slightly stronger than her. As for the guild’s respective leaders, both of them were renowned figures.

One of them was a Player who was called Magician, having two Tamed Monsters at his disposal and used them effectively to keep the Floor Boss under control constantly, paired with his magnificent leadership.

There was no casualty so far, even now, after nearly a year has passed. Meanwhile, the other was the owner of a Unique Skill, possessing exceptional defense and offense that exceeded every player.

During the 50thFloor Boss Raid, he even fended off the Floor Boss all by himself for the whole ten minutes. Some Players believed that this Holy Sword user was the strongest Player.

Both guilds had their own edge, and they were often compared by other Players. Because of that, there was a rumor that Red Wings and Knights of the Blood were on bad terms because they were competing for the title of being the strongest guild.

It couldn’t be helped if such rumors regulated around the Players because Rozen, who was Red Wings’ leader, constantly argued with Asuna, who was Knights of the Blood’s vice-leader, and because of that, Divine Dragon Alliance, who has been gunning for the strongest guild title became more and more hostile toward Knights of the Blood.

Zahad even deliberately tried to find faults in every idea that Asuna suggested in the last strategy meeting.

“It sure is eventful lately.”

Rozen put away the newspaper in his hands, and then he stepped into the Teleport Gate in Granzam as more and more Players pointed towards him and muttered his name.

After the teleporting light shrouded him, he returned to the 24th Floor, but this time, more and more people recognized and pointed their fingers at him.

“After nearly a year, this Floor is no longer just two floors away from the front line, huh? This Floor might as well be the Middle Floor already.”

As Rozen looked at the livelier crowd than the 55th Floor, he suddenly thought.

“Is it time to relocate the base?”

Otherwise, this annoying thing will happen to him every time as he’ll be recognized as soon as people spotted Saichou and Hanachou flying alongside him.

Not to mention having the bases at the lower Floor was simply troublesome, there were so many middle and even low-level Players asking to join the guild, and it was such a hassle to refuse them one by one, relocating the base to the higher Floor was a more viable option in this situation.

“As far as I remember, we should have enough Cor, and there was that reward after killing the Field Boss, too.”

Rozen arrived at the bar while thinking about the guild’s fund.

The bell rang lightly when Rozen pushed the door open.

Around this time, the bar should be empty since the rest of the guild members should be in the Labyrinth.

As usual, Saichou and Hanachou immediately hogged the bar counter for themselves.

But when Rozen thought there should be no one in the bar, someone’s voice was heard.

It was Kirito, who was sitting on the bar, holding a drink in his hand, looking a little flustered.

Rozen was startled at first and then grinned slyly because Kirito was not the only one inside the bar.

It was a young girl’s voice that greeted Rozen, and of course, he knew who she was.

She was a member of Moonlit Black Cats, Sachi.

When Rozen entered the bar, Kirito and Sachi were sitting close to each other, making the situation awkward.

After seeing that much, even Rozen would understand, right?

“Sorry for bothering you.”

Rozen said and immediately walked out of the bar.

Kirito was so flustered that it took him a while to call out Rozen.