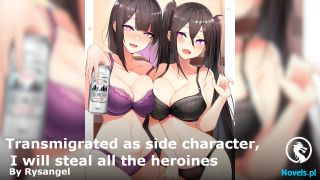 Chapter 1467: Your Parents Are Still Alive

Ye Tianxin looked closely at Mingzhu as if searching for some clues from her expression.

When Mingzhu noticed that Ye Tianxin seemed to be staring hard at her, she quickly looked into the mirror on her table.

“Tianxin, is my face dirty?”

Ye Tianxin did not know how to react to Mingzhu.

When Mingzhu heard the name, she suddenly froze.

Her expression became more stiffened as she looked at Ye Tianxin.

Her eyes not leaving Ye Tianxin, Mingzhu asked in a hoarse voice, “Where is he now?”

Ye Tianxin did not answer. She merely turned toward the elevator and walked down a step.

Both Ye Tianxin and Minzhu went into a car without saying a word.

Mingzhu wrang his hands together tightly. She did not know what had happened to Qin Chuan.

What was Qin Chuan trying to do?

Why did he expose her identity all of a sudden?

There were many questions in Mingzhu’s mind.

She hoped someone would answer her questions.

Half an hour later, Qin Chuan and Mingzhu met.

Mingzhu inspected Qin Chuan and was relieved when she saw that he did not look like he had been harmed physically.

Mingzhu took a seat opposite Qin Chuan. Neither of them spoke.

There was an awkward silence in the room.

“Mingzhu, there is something I don’t know if I should tell you. Now, I have decided to tell you the truth.”

He had done many evil things in his life. He know his life would not have a good ending.

He was going to die.

He would have to die one day.

Even though Ye Tianxin promised that he would not die.

It was no use.

Even if he managed to keep his life, he would be locked up like a bird in a cage.

There would be no meaning to life.

Life would be empty then.

At this point, Qin Chuan could no longer control his fate.

“Mingzhu, you are not an orphan.”

Qin Chuan gazed affectionately at Mingzhu. If she had not been taken away by those people, she would have grown up into a lovely girl.

She would be brought up by her loving parents.

She could have become an ordinary person, living a simple and contented life.

“Qin Chuan, I don’t understand what you are saying.”

Qin Chuan continued to look at Mingzhu. Ever since they were young, he had always been very protective of Mingzhu. All these years, they had relied on each other. They were not lovers, they were more like brother and sister.

He could not back off now. There was no way out for him.

Qin Chuan thought that before he ended his life, he should pull Mingzhu back to the right track.

“Your parents are still alive.”

She placed her hands on the table.

She had a stern glaze in her eyes as she contemplated his words.

“Qin Chuan, whether they are dead or alive, it has nothing to do with me.”

Mingzhu did not want to know who her parents were.

She also did not know what reasons they had for abandoning her.

There was a faint smile on his face.

“Mingzhu, your parents did not know that you are alive. Back then, they swapped you with a dead baby.”

Qin Chuan spent a lot of time and effort trying to track down Mingzhu’s real background.

He finally found out the truth.

“Qin Chuan, don’t beat around the bush. Just tell me. Who are Mingzhu’s real parents? Technology is so advanced these days. We can always do a DNA test to verify.”