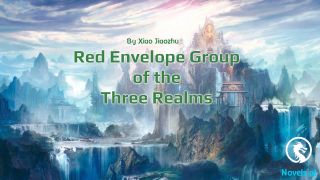 Big News: The Secretary of Municipal Party Committee in City F, Yuan Jisong, was stabbed by a crazy man at the outside of the Government Center. A young girl kicked the crazy man away on time and her partner caught the criminal. (Photo Attached]

The photo was taken after Yuan Jisong was rescued because everyone was shocked at that time, and none of them were in the mood to take pictures.

Before long, someone exposed the criminal’s identity. The crazy man was the vice director of the Finance Department, Zhang Chao. He had been found guilty of power abuse by Yuan Jisong and had been dismissed. Zhang Chao cared too much about fame and money, so he went crazy after his dismissal, and came to attack Yuan Jisong. Zhang Chao was sentenced to 10 years in jail in the beginning, but now it seemed like he would end up with a life sentence.

People all complimented the young girl who had rescued Yuan Jisong from the sharp knife. The photo was taken from afar, so Gu Ning’s and Leng Shaoting’s faces weren’t clear, but Hao Ran and the others who were familiar with them recognized them at once. They all called Gu Ning to ask whether she was safe.

Gu Ning’s phone kept ringing the entire time, but she didn’t lose her patience, because she knew that they cared about her.

Many reporters came to interview Yuan Jisong after the accident. They were curious about the young girl who had saved Yuan Jisong’s life, but Yuan Jisong declined to reveal more details about her. And people admired the low-profile young girl more.

Leng Shaoting was assigned a task a few days later and he had to leave.

The night before Leng Shaoting left, Gu Ning stayed with him.

Leng Shaoting didn’t know when he would see Gu Ning the next time, so he touched, kissed and made love to her again and again throughout the night. Gu Ning almost passed out from the wild lovemaking. Luckily, she had her magical power to support her.

“Ningning,” Leng Shaoting called in a hoarse but amorous voice.

“Yes,” Gu Ning moaned in pleasure, which turned Leng Shaoting on once more. They didn’t stop for a break until they were both exhausted. However, Leng Shaoting still held Gu Ning in his arms tightly even during the break.

“Shaoting, we didn’t use condoms. What if I’m pregnant?” Gu Ning suddenly asked. She had used her power to protect her womb and stopped Leng Shaoting’s sperms from getting inside. Gu Ning simply asked the question to test Leng Shaoting. To be honest, Gu Ning was nervous when she asked that question because she was afraid that Leng Shaoting would tell her to have an abortion.

Leng Shaoting’s body stiffened a little when he heard the question. He had never thought about it, but if Gu Ning really was pregnant, he wouldn’t mind at all. Instead, he was looking forward to it. “Let’s get married then,” he said with alacrity.

Hearing that, Gu Ning’s heart pounded heavily a few times. Although she believed that Leng Shaoting was a reliable man, she was excited and deeply touched when she heard the answer.

“I don’t want to get married or have a child at such a young age,” Gu Ning said.

Hearing that, Leng Shaoting was anxious. He pressed Gu Ning to him and felt a little helpless. “Then what should we do?”

Although Leng Shaoting was willing to marry Gu Ning so that they could be together as a married couple, he didn’t want Gu Ning to feel cornered. Seeing Leng Shaoting being so anxious, Gu Ning comforted him. “There, there, we can use condoms the next time to avoid pregnancy. And we can get engaged when it’s the right time. We can get married after my graduation.”

Su Anya’s birthday came soon, and she called everyone early in the morning, in case they forgot. She informed them to come to her house at 4 pm to get ready for the party. Su Anya’s home was in the same area of villas as Qin Yifan.

Gu Ning had a strange feeling when she set out to attend the birthday party, but she failed to foresee anything. In case any accident would happen, Gu Ning left her home along with Gao Yi and Qiao Ya.

Gu Ning went to pick Yu Mixi up first, while Chu Peihan picked Mu Ke and An Yi up, and Hao Ran would drive his bros to the appointed location.

It was only 3:30 pm and the party would begin at 6 pm. None of the important figures in politics and business would arrive until it was past 5 pm. Therefore, Gu Ning and the others didn’t wear their formal clothing yet, and they decided to change later.

When they were almost there, Gu Ning called Su Anya. Thus, the moment that Gu Ning arrived, she saw Su Anya waiting at the gate.

Although the Su family and the Qin family lived in the same area of villas, their houses were located in opposite directions, and there was a long distance in the middle.

Su Anya ran to them the moment they got out of the car. “Gu Ning, Mixi, welcome!”

Su Anhao and Jin Kexin were also there, and Jin Kexin was disappointed when she saw that Leng Shaoting was absent. Gu Ning noticed that. She was a little mad but directly ignored Jin Kexin.

“Let me introduce, this is Gao Yi, and this is Qiao Ya. Both of them are my drivers, bodyguards, and assistants,” Gu Ning said to Su Anya. Gu Ning had told Su Anya on the phone that morning that she would be coming with two other friends, so Su Anya wasn’t surprised.

“Nice to meet you!” Su Anya greeted them.

“Nice to meet you too, Miss Su,” Gao Yi and Qiao Ya said.

“The others aren’t here yet. Let’s go inside! It’s cold outside.” Su Anya guided them walking inside.

Just as they entered the living room, a middle-aged, elegant woman walked forward. She was Su Anya’s mother. Su Anya had an older brother who was 23 years old, so Su Anya’s mother was almost 50 years old now, but she was still charming because she took good care of her appearance.

“Mom, these are all my friends, Gu Ning, Yu Mixi, Gao Yi, and Qiao Ya,” Su Anya said to her mother.

“Nice to meet you all! Welcome to Anya’s birthday party,” Mrs. Su said politely. She didn’t ask about their family backgrounds at all, because her family wasn’t snobbish.