Support
Random Novel
I Might Be A Fake Cultivator 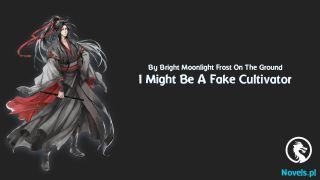 «Reign of the Hunters (Web Novel) - Chapter 455 Chaos and Confusion

The room was quiet as a song had just ended. And his cold tone could be heard by all who were present.

But Fleeting Time stood up before the guild member could finish the sentence, “But I’m serious…” he said with a smile.

“But…” the man was shocked. He looked at Fleeting Time, and then at Mo Leng. This was a highly confusing situation for the man.

Mo Leng’s expression darkened. One could see her face growing pale and then a shade of red. It was then replaced by an expression of defeat. She sat in a daze for a long while. Her eyes remained unfocused. It was as if she was staring at nothingness.

It would be quite a while until she finally slowly raised her head to look at Fleeting Time. The entire room was silent save for the background music that was being played when the next song on the playlist started. No one dared to make a sound.

Fleeting Time met Mo Leng’s gaze with an icy glare of his own before taking a seat between another group of male guild members. It was the perfect spot. There was just enough room for him, but it was impossible to make space for yet another person unless one of the members gave up his spot.

Mo Leng was furious. How dare he walk away from me! She walked up to Fleeting Time, stared at the man, and was promptly ignored. His eyes remained glued to the screen of his phone, on the game that he was playing. He refused to acknowledge the presence of the woman who was staring holes right through his body.

“Yi Qingchen, are you really doing this to me?” Mo Leng's anguish finally spilled out.

“You should ask that to yourself, Mo Leng.” came the cold reply.

“Do you even call yourself a man?! How can you treat me like this!” Mo Leng screeched. There was now sorrow in her voice.

But Fleeting Time’s patience was at its limits. He looked away from his phone to shoot a glare at Mo Leng, “How should I be treating you then?”

“That’s enough. Take this outside, will you?” Absalom immediately interjected. He did not wish for the two to start a fight in full view of the guild’s core members. He reached towards Fleeting Time to drag him out of the compartment.

But his hand was immediately slapped away, “Keep your hands off me! There’s nothing I want to say to her.” The annoyance was clear in his voice.

Absalom could feel anxiety gnawing at his heart when he noticed the change in Mo Leng’s expression following Fleeting Time’s words. He reached for Fleeting Time again and began tugging him out of the room, “Come on, don’t be like a child. Let’s talk outside.” He then gave Silent Hymn a look, Get her out of here as well.

This snapped the vice leader of Genesis out of his shock, who immediately made his way towards Mo Leng to usher her out of the room.

Fleeting Time’s annoyance was already through the roof. He was being constantly pestered by Mo Leng. Her appearance in the event only served to pour oil to the blazing flame that was his anger, “I’ve said what I want to say. Why should I repeat myself again? Am I a recorder?”

Absalom was taken aback by his outburst. He had never seen his friends of many years losing his temper in such a manner. Fleeting Time was someone who he knew very well. The man was a person with exceptional self restraint who would always keep his temper in check.

Even he did not know how Fleeting Time would react if his buttons were continuously being pushed. But just when the leader of Genesis was trying to think of a way to defuse the situation, he felt himself being pushed away by a force. This caused him to stumble backwards, and what he saw next shocked him deeply.

Mo Leng’s blood was boiling. How can he say something like that? And to me of all people! Her breathing grew heavier and heavier as anger continued to broil within her. Her vision was filled with red as she stared at the face that she was starting to hate more and more. All the sorrow she had held was converted into anger in an instant.

The girl’s anger continued to fester until it exploded into a fit of rage. She was able to shove Absalom aside with a sudden surge of strength, reaching for the bucket of ice sitting on top of one of the tables, and poured its content all over Yi Qingchen.

The entire room was shocked.

Despite their best efforts, the Genesis members on both sides of Yi Qingchen were still splattered by the icy cold water. The man himself was soaked from head to toe as he did not expect something like this from Mo Leng. It had caught him completely off guard.

It was as if time had stopped at that very moment. The entire room was gaping at the two. The room was so quiet that Mo Leng’s heavy panting could be heard even over the music.

And the members of the guild immediately snapped out of their daze. Some of them began searching for towels and wipes for the men unfortunate enough to be collateral damage of Mo Leng’s anger.

Silent Hymn immediately reached out for Mo Leng to pull her aside, but the girl’s feet were planted firmly on the ground. She refused to budge even as she glared holes through Fleeting Time.

The only thing Absalom could do was to pull Fleeting Time out of the room, “Let’s head to the washroom. We need to get you cleaned up. Just look at yourself…”

Fleeting Time did not resist Absalom’s efforts this time. His gaze, however, remained fixed on Mo Leng as he was being dragged out of the room. Mo Leng met his gaze with eyes red with anger. He raised a finger and pointed at Mo Leng, but Absalom slammed the door shut behind him.

“What the heck man! What were you thinking? You know how she is!” Absalom sighed as he headed to the washroom with Fleeting Time in tow.

“So you’re saying that it was MY fault? Are you stupid? You’re not the one getting splashed with the bucket!” Fleeting Time’s anger erupted.

“Well you’re not gonna bite a dog just because it bit you, right?” Absalom raised his voice as well. Oh God, I can’t deal with this any much longer!

Fleeting Time shot Absalom a glare that could blast through a sheet of steel, “You and your wife should’ve minded your own damn business!” he squeezed the words through gritted teeth. He pushed Absalom aside, heading to the washroom alone.

Perhaps the sight of customers being drenched head to toe was already a common sight, the employees did not react to Fleeting Time’s current state with surprise. One of them had even walked up to him and offered him a dry towel.

Fleeting Time glared at his reflection as he stood by the sink. He cleaned his face before wiping his head dry with the towel. His face was a mask of fury.

Fruit Jelly ran into Fleeting Time as she headed to the washroom. She took her leave from her guild members to check on her makeup, and saw the seething man standing by the sink outside the male washroom, but her presence was not noticed.

She wanted to greet the man, but decided against it when she saw the scowl on his face. She could feel the killing intent emanating from his eyes.

Fleeting Time was still sulking by the sink when Fruit Jelly headed back to the karaoke room. She ran into a lady with a beautiful appearance on her way back. She was gorgeous despite the frown on her face.

Ahhh… As expected of true beauty. She looks so nice even when she’s angry! But this did not trouble her for long, as another thought crossed her mind. Oh shoot! My song’s starting soon! I better hurry!

She sprinted down the hallway back to the compartment shared between Conquering The Heavens and Upwards Ho!. “Oi! It’s almost my turn! Don’t you guys dare cut in front of me!” Fruit Jelly hollered as she pushed past the door.

Mo Leng stood not far away from Fleeting Time. She stared at him for a few seconds before taking a step forward, “I’m sorry.”

But her apology fell on deaf ears. It was as though her presence was not even acknowledged by Fleeting Time. Tears threatened to flow out of her eyes.

She moved closer to Fleeting Time, and after some hesitation, rested one of her hands on the side of his face, “I’m sorry.”

But Fleeting Time recoiled the moment contact was made between their skin. He slapped her hand away, and spoke to her with an icy cold voice, “Stay away from me!”