Support
Random Novel
My Sister the Heroine, and I the 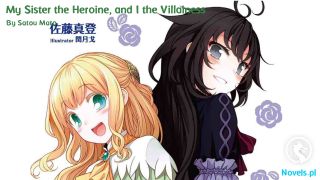 A beautiful waitress was introducing different drinks to him.

She made eyes at Mei Qi tasting the wine in the goblet.

Song Yunxuan sighed slightly and was ready to leave.

He put down the goblet and said something to the waitress smilingly. Then he chased Song Yunxuan out of the restaurant.

Seeing him following out, Song Yunxuan asked with a smile, “Am I disturbing you enjoying the wine?”

Mei Qi followed her out. He didn’t ask what Song Yunxuan and Lu Feng had talked about.

When they got in the car, Mei Qi asked Song Yunxuan, “Manager Song?”

Mei Qi thought for a moment. Then he seemed unable to bear his curiosity any longer. He asked, “What did you say to Mr. Lu?”

Mei Qi thought about it for a few moments. Then he started the car, “Good idea.”

Song Yunxuan did not respond.

It was indeed a good idea. It would not only maintain the mutually beneficial relationship between Song Yunxuan and Lu Feng, but it would also erase the Chu Family’s doubt.

She gently lifted her hand and touched her belly. Her eyes became softer.

Since Song Yunxuan was pregnant, she became more gentle and tender.

A woman would change a lot when she got pregnant.

Words spread fast that Song Yunxuan and Lu Feng had dinner together, especially in the Shao Family, which had been closely watching Song Yunxuan.

Whatever happened between Song Yunxuan and Lu Feng would arouse the Shao Family’s attention.

Shao Tianze pursed his lips and frowned when he learned that Lu Feng booked the whole Pansy for Song Yunxuan.

Miaomiao was holding Winnie the Pooh and taking a nap on the sofa inside the study.

He didn’t want the phone rings to wake Miaomiao up.

The phone buzzed, and Shao Tianze took a look at the phone. He picked it up.

He talked in a low voice.

Gu Changle heard that Shao Tianze kept his voice low. She could not help wondering, “Where are you?”

“You’re at home?” Gu Changle was doubtful. She continued asking, “Who are you with?”

Gu Changle understood it but felt even madder about it.

She was so angry about it.

But she couldn’t do anything about it. She asked Shao Tianze, “Is Miaomiao sleeping?”

“No wonder you’re keeping your voice low.” She smiled and made her tone gentle.

But her mind was full of nasty thoughts.

She was so disgusted by Gu Miaomiao. Gu Yi was finally gone. Now Shao Tianze spent all of his time with Miaomiao.

If she had known that Shao Tianze would spend so much time with Gu Miaomiao, she wouldn’t have made Gu Yi leave the city.

Now the problem became that Shao Tianze was with his daughter all the time.

“Won’t she interrupt your work if she is with you all day? I’ve been much better. How about sending her to me for a few days?”

Having said that, he must be afraid that Gu Changle might hurt Miaomiao.

Although it was unsaid, Gu Changle was aware of it.

“Since Lu Feng has announced he’s going to marry Song Yunxuan, all the media is crazy about Song Yunxuan.”

“This is not surprising. After all, she’s a woman of many good stories.”

Although Lu Feng was lame, he was a very capable man.

He came back with power. Every business family would love to be his friend.

However, Song Yunxuan was luckier than Shao Tianze. She gained Lu Feng’s trust, or to put it in other words, his favor.

“Song Yunxuan left the dinner party early. I assumed she fell out with Lu Feng. But the next thing Lu Feng did was to announce that he had been engaged with her. It’s odd, very odd.”

He wondered why she left so early that day.

Gu Changle changed the subject and talked in a soft voice, “Tianze, when will you come to see me?”

In the past, even if Shao Tianze needed to tuck Miaomiao in, he would come to the hospital for her at late night.

Now he was not willing to come here after Miaomiao fell asleep.

She pursed her lips and waited for Shao Tianze to answer.

Shao Tianze responded, “Miaomiao needs me since Yi left. She’s been sad. You are much better now. I may have to spend more time with Miaomiao.”

Gu Changle was angry. Given that Miaomiao was Shao Tianze’s daughter, Gu Changle pretended to ask with concern, “Okay, you don’t have to worry about me. Take good care of Miaomiao.”

“I’ll come to see you whenever I have time. You can call me at anytime.”

Gu Changle had intended to talk more with him, but he just wanted to end this conversation.

She pursed her lips and did not want to play the victim, “Well, you too.”

Shao Tianze said goodnight to her and hung up the phone.

Listening to the busy tone, Gu Changle twisted her brows.

Then she threw the phone on a cabinet.

Seeing this, the carer who was responsible for taking care of Gu Changle went out of the room as she knew that Gu Changle was in a bad mood.

The pay for this job was high. But there were a lot of rumors about Gu Changle going around.

She even heard one that Gu Changle killed one of her carers.

She didn’t know if Gu Changle had really killed the carer or not. She just knew that she’d better stay away from this madwoman.

After hanging up the phone, Shao Tianze pondered for a long time.

Miaomiao turned over on the sofa.

Shao Tianze walked over and crouched at the sofa. Looking at Miaomiao’s sleeping face, Shao Tianze gently touched her hair.

Miaomiao slept soundly. Touching her hair didn’t wake her up.

She just twisted her eyebrows.

Seeing that she was uncomfortable, Shao Tianze carefully picked Miaomiao up from the sofa.

He left the study and took her to her bedroom.

The housekeeper saw Shao Tianze walking out of the study with Miaomiao. She asked Shao Tianze, “Mr. Shao, let me…”

Shao Tianze instructed the housekeeper to recruit a new babysitter for Miaomiao.

He was being very demanding about the babysitter. The housekeeper looked out for several babysitters who received professional training. No one got the position.

It was not easy to find a good babysitter within a short time, so the housekeeper was doing the babysitting on her own.

However, when she took the initiative to take care of Miaomiao, Shao Tianze did not feel easy.

He did it himself.

The housekeeper followed Shao Tianze to Miaomiao’s bedroom and opened the door for them.

Shao Tianze nodded and pulled up the sheet for Miaomiao. He said, “I’ll be here for a few more minutes.”

“Call me whenever you need me, Mr. Shao.”

The housekeeper took the leave.

He fell into meditation.

In the next few days, everyone in Yuncheng knew Lu Feng was engaged with Song Yunxuan.

The death of Chu Mochen had already steered Song Yunxuan towards controversy.

Now that the good news attracted everybody’s focus on her, Zang Linger seemed to get used to living in Yuncheng.

Song Yunxuan could see that she had no intention to leave.

Mei Qi, who had invited himself for breakfast in Song yunxuan’s house, saw Zang Linger having breakfast leisurely. He asked, “Miss Zang, when do you plan to go back to Harbor City?”

Zang Linger had a sharp mind. She knew that Mei Qi was suggesting that she should go back.

She responded to Mei Qi with a smile, “I’m in Song yunxuan’s house. I’ll leave when I want to. It’s Yunxuan’s call to let me leave. You’re not one of the Song Family. Who are you to ask me to leave?”

“You’re really good at tongue twisters.” Mei Qi glanced at her while eating.

Linger sneered, “Mind your own business.”

Zang Linger frowned, “I have nothing to do in Harbor City. Isn’t it good for me to stay with you here?”

Song Yunxuan said with a smile, “I have no time to hang out with you. Don’t you get bored?”

Zang Linger could stay as long as she wanted. Song Yunxuan could afford that.

It was just that she wondered why Zang Linger stayed in her house.

She thought a lot and tested her much about it, but she got nothing.