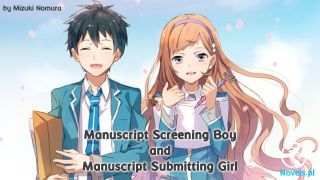 “It seems like you’re quite suited to play the evil supporting female lead role!” Gong Yu Bai narrowed his eyes to look at her, “That violent?”

“It’s called guarding against the future, making you timid.”

“There’s really nothing in this world that can make me, Gong Yu Bai timid.” He narrowed his eyes that were filled with absolute confidence.

“Che! Arrogant!” Luo Qing Chen pursed her lips, “When god Yu’s fame isn’t the same as before, you will start worrying!”

Gong Yu Bai gave a snort before looking up with his starry eyes, “I’m not part of the entertainment industry, why do I care about fame?”

But he knew very well that too much admiration had immeasurable consequences.

He had to be calm!

“Aren’t you an actor? It can’t be that you have problems at such a young age, right!” Luo Qing Chen looked him up and down before falling onto a certain part on the bottom half. She touched her ear with her right hand and muttered, “It’s no wonder he doesn’t do any kissing or bed scenes, it turns out……”

“Da!” Gong Yu Bai’s slender fingers flicked her forehead before he looked at her with a serious look, “Do you want to test if there’s a problem or not?”

The air around her seemed to have frozen and Gong Yu Bai’s calm look made her a bit nervous.

“Ah! That, I suddenly remembered that I haven’t packed my things yet, so I’ll be leaving first!” Luo Qing Chen bit her lip and turned around with an awkward look, fleeing the ‘scene of the crime’.

When she came to the door, she suddenly thought of something. She turned to ask Gong Yu Bai, “So how are we heading out at twelve? It can’t be that you have a private plane, right!”

Gong Yu Bai’s deep eyes intently looked at her, like a hunter looking at prey, looking at her very seriously.

“Un humph! I’m afraid that in miss Luo’s mind, the nation’s male god has a ‘problem’!” His slightly sarcastic tone with that ghost of a smile was very charming.

“Nonsense!” Luo Qing Chen pursed her lips and didn’t forget to give up a thumbs up, “A great nation’s male god.”

At noon, they boarded Gong Yu Bai’s private plane after having lunch.

It wasn’t a small helicopter, but rather a small jet.

This was Luo Qing Chen’s first time on a private plane, so this feeling really was a bit surprising.

“I’ve already emailed director Li. When you have time, you can have a first meeting.” Gong Yu Bai took a sip of coffee before saying this to Luo Qing Chen in front of him.

“This fast!” Luo Qing Chen slightly knitted her brows, “I heard that director Li is the most unapproachable person in the entire entertainment industry. You shouldn’t say it like this, or I will be a bit nervous.”

“What are you nervous for?” Gong Yu Bai narrowed his eyes and said, “If you’re not satisfied with him, then he can be replaced.”

“Ah?” Luo Qing Chen was startled as her left elbow hit the window. She looked at him and said, “What kind of god is god Yu? You’re speaking as if director Li is one of your subordinates.”

“Guess.” Gong Yu Bai revealed a very faint smile, “I’ll check my schedule. If I have time, I’ll go with you.”