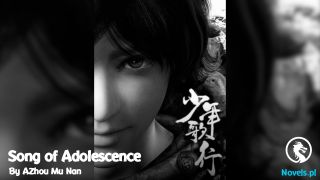 “You, you, you……” Chun Hua snappily replied, “Some people just don’t look good, so they expect everyone in the world to look as ugly as them! It’s a pity that there are many handsome guys in this world!”

“Are you certain?” Da Chong gave a shrug and said with a wicked smile, “If that was true, our school wouldn’t just have young master Jin as the school hunk alone!”

“You, you, you……” Chun Hua’s face was red as she angrily slapped the desk, “You’re a person who eats grapes and says that they aren’t sour!”

There was a ‘peng’ sound as the teacher standing up front couldn’t take their bickering anymore, so they angrily said, “Stop arguing! If you keep arguing, then you can go run ten laps!”

Luo Qing Chen put her cheek on her right hand, feeling that this group of children were cute.

Yes! In her eyes, they were just like children, bickering in the spring of their lives and enjoying the beauty of these quiet times.

Perhaps many years later they will smile when they think of the people they bickered with, a sincere smile that came from the bottom of their hearts.

Because they missed it, so it was sincere.

Because it was beautiful, so it was sincere.

The teacher saw a youth slowly walking into the classroom not far away, so they waved their hand, “Over here, over here!”

Luo Qing Mian quickly came to the door and then bowed to the teacher, “Hello, teacher!”

The warm and sunny voice rang through the silence. Some people in the class hadn’t seen Luo Qing Mian yet and some people couldn’t help calling out in surprise when they did see him.

“Is this for real? Why do I feel that his face can even instant kill young master Jin’s!”

“Hey, stop being so exaggerated!” Da Chong sitting in the last row of the first column couldn’t take the whispers of these two girls. He twirled his pen as he said in a disdainful voice, “You really are boasting to the sky, don’t you know how handsome he is in his heart? It’s like you’ve never seen a handsome person before……”

But before Da Chong could finish, Luo Qing Mian walked in.

He was wearing a navy blue sweater and black slacks. His fair face was like fresh snow and his facial features were well defined, especially those eyes that were like clear springs, looking so bright.

“Hello everyone, my name is Luo Qing Mian.” He stood at the front and looked over everyone before his eyes fell onto his big sister.

This feeling really was good. In that dangerous world where life and death was disregarded, the people that had fought together had gathered here.

“Da Chong! Do you see it? Let me ask you, are you envious?” Chun Hua raised her head to look at Da Chong with a very excited look in her eyes.

Da Chong was clearly stunned and his mouth was wide open as his pen fell to the ground.

His expression said everything. This boy who suddenly came into their class really was handsome.

Moreover, it was a kind of clean and pure handsomeness.

It would be fake to say that he wasn’t envious since his appearance was more than a block away from Luo Qing Mian standing in the front.

He still had this bit of self awareness.

But he couldn’t stand Chun Hua acting arrogantly, so the anger in his heart swelled when he saw her.