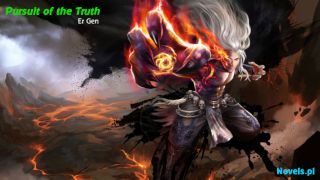 Long Chen’s figure had just appeared when he charged at Hu Xiaolin once more, not giving the latter any breathing room.

Hu Xiaolin appeared even more wretched than before. His shoulder had exploded into a pulp of flesh. It was unknown what kind of attack he had suffered.

Hu Xiaolin was a giant, and his arms were very long. Now that Long Chen was this close, he panicked, not knowing how he was supposed to fight like this. That was because he had never had a real fight against a human.

Normally, this move of Long Chen’s would strike his opponent’s nose, but Hu Xiaolin’s head was just too big, and Long Chen couldn’t pinpoint the nose correctly. As a result, Long Chen’s knee struck his eye socket.

The sound of bones breaking caused everyone to wince. Blood spurted from Hu Xiaolin’s head.

Hu Xiaolin let out a wild roar, and Long Chen was suddenly blown back by an irresistible power. A berserk aura surged.

The sky became dark as a giant figure appeared.

“He’s returned to his true body!” Startled cries rang out. Hu Xiaolin had finally abandoned his human form and returned to his original form. His huge body completely blocked the sun. A berserk killing intent made everyone shiver.

He was a giant tiger with a pair of black wings. With each flap of his wings, the sky shuddered.

The tiger’s entire body was black and a bit lustrous. Its huge fangs gave off a chillingly sharp light, and his huge eyes possessed boundless killing intent as he glared at Long Chen. One of his eye sockets was still bleeding, as that was the injury Long Chen had just caused.

After taking the true form of the Darkwing Devil Tiger, Hu Xiaolin suddenly slammed a huge claw at Long Chen.

What shocked people was that despite him having a body tens of thousands of meters long, his speed was still fast. They practically couldn’t even see his movements. A claw as large as a mountain smashed toward Long Chen.

Long Chen didn’t even have a chance to dodge and was struck head-on. The ground exploded and astral winds spread. The entire world rocked because of this one attack.

Spiderweb cracks had covered the land, as if the entire world was about to crumble. That power had surpassed their understanding.

“I’ve heard rumors that the Xuan Beasts transform into their human form in order to sense the Heavenly Daos, merge their divine abilities with the Heavenly Daos, and create their foundation for ascension. However, their human form also limits their power. Only once they returned to their true forms can they unleash their full power. When Hu Xiaolin said that he was using only fifty percent of his power, it seems he wasn’t lying,” said the Empyrean from the neutral camp.

Although he was also an Empyrean, now he found out just how lacking he was compared to Hu Xiaolin. The power that Hu Xiaolin had revealed before wasn’t something he could defeat, but at least he’d be able to flee. However, now Hu Xiaolin was as quick as lightning, and thus he’d definitely die before getting away. His only option would be to patiently wait for his death.

In front of Hu Xiaolin, Long Chen appeared to be an ant that could be crushed with a single blow. Even the Dragonblood warriors jumped in shock. The power of just a physical body couldn’t possibly block such a terrifying attack.

“Don’t worry, boss is definitely fine,” said Guo Ran. He was the one most confident in Long Chen.

The ground exploded, and a pillar of green light lit up the sky.

The claw that Hu Xiaolin had slammed into the ground suddenly shot back, and his huge body was sent flying.

Everyone looked toward the green pillar of light in shock. They saw Long Chen slowly floating out of the ground.

“What the fuck? Why can’t I look like that?” Guo Ran couldn’t help feeling envious.

Meng Qi, Chu Yao, and Tang Wan-er all smiled. In this world, there was no one more reliable than Long Chen. Being with Long Chen always made them feel safe.

With the dragon scales covering his body, Long Chen emitted a noble, holy aura. He emitted a will that shook the nine heavens and subdued the four seas.

Long Chen had summoned the Green Dragon Battle Armor. However, this time, with the five-point star illuminating him, his true dragon essence blood was fully activated. That majestic aura was released automatically.

To humans, this aura only felt grand and vast. To the ancient races, it felt like a stone was pressing against their hearts. In front of that pressure, they found it hard to breathe. However, the ones who had it the worst were the Xuan Beasts. They were all pale with terror. Their souls were shuddering.

Tigers were sometimes called the kings of a hundred beasts. Those beasts referred to regular beasts.

Dragons were the emperor of all beasts. These beasts were not just ordinary beasts but also divine beasts. Dragons were supreme existences. Any beast would feel suppressed by its pressure.

Although Long Chen possessed true dragon essence blood, he had never learned how to activate the dragon might. It was only now that his five stars had reached their complete state that the illumination of the five-point star fully activated the dragon might hidden in his blood.

The Xuan Beasts were extremely sensitive to this dragon might. Others might not feel much, but these experts from the Darkwing Devil Tiger race were all trembling. This was something they couldn’t control.

Standing up in the air, with waves of divine green light flowing around him, Long Chen said, “Nothing in this world is impossible. That’s why whether you’re a man or a beast, you need to have respect in your heart. However, the lot of you decided to frame me and ruin my reputation for your selfish desires. I don’t particularly care about that, as I can laugh something like that off. However, you shouldn’t have touched my reverse scale. If you wanted to target me, you should have come at me instead of reaching your despicable hands toward my companions and tormenting them. Don’t blame me for being vicious.”

Hu Xiaolin let out a furious roar as he was blown back by Long Chen’s flame blade. His black wings were now ablaze with golden flames. Black qi surged out of the wings, slowly erasing the flames.

All this time, Huo Long had continuously absorbed the Divine Flame Crystals. Its power had grown to the point that it practically matched a fully matured Earth Flame.

Its flame energy was something that frightened even the Empyreans. If they were touched by it, they would need a huge amount of Heavenly Dao energy to erase the flames.

Only the Xuan Beasts understood that logic, while the ancient races were able to see some clues. However, the humans were unable to see that Hu Xiaolin was being suppressed by Long Chen’s dragon might.

All they saw was Long Chen’s scales shining while Hu Xiaolin was repeatedly forced back.

“He doesn’t even have any Heavenly Dao fluctuations. He can’t be an Empyrean.”

“A monster. That’s the only way to describe Long Chen. A terrifying monster.”

The neutral camp’s experts couldn’t help muttering amongst themselves as they saw Long Chen force back the giant black beast.

Golden flames filled the sky. Hu Xiaolin was only able to stay alive in the sea of flames. He wasn’t able to retaliate at all.

“Hu Xiaolin’s power is suppressed by Long Chen’s dragon might. He can’t use his abilities. We’re going out as well,” said Yan Weishan to the Corrupt path’s Jin Mingwei.

Long Chen’s power had far surpassed their expectations. Now wasn’t the time to mock Hu Xiaolin. If Long Chen really did defeat the Xuan Beasts while they just stood and watched, that would offend the whole Xuan Beast races.

Although Hu Xiaolin’s mouth was very dislikable, they all knew that the Xuan Beasts were very protective of their members and also overbearing. They had to go help him now.

“Tch, after all his bragging, I actually thought he had some ability. With the dragon might, this tiger has turned into a cat,” sneered Bloodkill 1.

Yan Weishan frowned. “I called you over to give face to you. If you don’t want to fight, I’ll do it myself.”

Bloodkill 1’s expression was calm, but a bit of anger had appeared in his eyes. However, Yan Weishan and Jin Mingwei ignored him. They vanished from their original locations.

Long Chen was in the midst of fighting Hu Xiaolin when he suddenly sensed danger. His flame blade slashed behind him.

Flames exploded. A flame spear had appeared in the air, shocking Long Chen. This flame spear was actually able to block his flame blade.

Suddenly, the flames exploded, and a blood-colored hand reached out toward Long Chen.