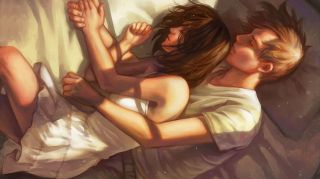 Even though they had failed to retain any dignity, when the North Buyeo clansmen were given the orders to shoot, there was no hesitation.

A discombobulation of smoke and fire engulfed the center of the ring as the spot that Yang Chen was standing just seconds ago was blown to disarray!

After the men had finally ended the shooting, they quickly came to the realization that Yang Chen had already vanished!

Right at that moment, a loud cry was heard from where Go Chak stood as the clansmen turned towards its source. The found Yang Chen clamping onto Go Chak’s arms from behind!

“Last chance, who is your leader? Who are you collaborating with?” Yang Chen solemnly asked.

Go Chak was furious when a tinge of defiant gaze flashed through his eyes before he reached for his coat and pulled out a vintage pistol!

Go Chak attempted his best to do a backhand shot at Yang Chen, but Yang Chen was done with games!

Before Go Chak could focus his aim, Yang Chen had already snatched over his gun and forced it into his mouth!

Go Chak winced so hard his eyes were blood red!

Amidst the collective panic of the North Buyeo henchmen, Yang Chen unhesitatingly pulled the trigger!

Strings of blood shot out of his hindbrain!

Casually kicking Go Chak’s lifeless body aside, Yang Chen took a quick screen over his surroundings. “Who is your leader and who orchestrated the scheme against the Park clan? Tell me and you live. Everyone else will die.”

The words from his mouth akin to the devil’s calling as the Korean men started trembling in fear.

Regardless, due to their greater apprehension of the clan’s internal protocols, their lips were held shut.

After they all shared a glance with one another, they slowly gathered confidence from presumed strength in numbers. After all, as North Buyeo clansmen, they have had their fair share of powerful adversaries.

“Brothers, he killed Mr Go before our eyes. Let’s make him pay!”

“Agreed, we’ll speak if you can survive this!”

Under the orders of several second in commands, the hostile army concentrated their firepower on Yang Chen.

In moments, the entire underground casino was clouded in a haze of debris! Nothing was spared from the tables to the walls and the furniture in the room!

Amidst the rubble, Yang Chen was unfazed by their actions. Although it was difficult for him to obtain any information, it wasn’t in his plans to create a bloodbath.

All bullets en route to Yang Chen were repelled by a translucent shield.

Nonetheless, being in a star rated hotel setting, Yang Chen was also reluctant to dismember his opponents.

After taking a deep sigh, Yang Chen waved his arms, harnessing the Heaven and Earth Restoration Energy into an explosive stream before instantly evaporating the clansmen into dust!

For a regular person with little to no cultivation, their mortal flesh had no resistance towards Yang Chen’s current cultivation!

Under minimal pain or emotions, their bodies vaporized to its barest molecules.

In a blink of an eye, the entire casino was dead silent, with Yang Chen being the only man standing.

Yang Chen took a quick scan to find the leather bag that Go Chak was prepared to take off with, along with his personal phone.

Go Chak’s leather bag was filled to the brim with stacks of documents and financial records, largely involving his underground casino business and some loan shark involvements. But amidst his shady activity, something else had caught Yang Chen’s eye.

The signed documents involving collaboration and investments with the Park clan!

And the signature was none other than Park Jonghyun’s!

From the gist of the projects, it was clear that Park Jonghyun unofficially signed upon such agreements unbeknownst to the rest of the family!

After unlocking Go Chak’s mobile phone, Yang Chen quickly swiped through his recent call history, pleased to see that the numbers were all still present, including Park Jonghyun’s.

With that, he was confident that there was sufficient evidence for Park Jonghyun to crack, while also satisfied that he made it here right on time before they could remove noteworthy evidence.

After the debacle at the casino, the police soon arrived at the scene, which prompted Yang Chen to delay no further as he once again vanished into thin air.

To offer this information to the police or external parties would be less than secure, and as of now, his only strategy was to reveal the plot to Park Cheon himself and leave him to clean up the mess in his own household.

After making a rough estimation, Yang Chen assumed that Park Cheon would have been awake by now, and since he had to meet anyway, he would willingly offer to boost Park Cheon’s recuperation by channeling Endless Resolve Restoration Scripture.

Meanwhile, at a ground floor living room in a mansion located in the Gangnam area.

Cold sweat trickled down Park Jonghyun’s face but he was too anxious to wipe them off as he paced back and forth.

An assistant hastily made his way into the house, before he reported. “Chairman sir, we’ve got news from the Myeongdong Hotel. When the police arrived, there was evidence hinting towards an intense gunfight and Go Chak was found dead with a bullet through his head!”

“What?! He’s dead?!” Park Jonghyun reacted. “Where were the others?”

“Mostly likely dead sir. But their cars were all exactly where they were…”

Park Jonghyun felt a cold snap resonating through his spine as he contemplated. “I don’t care if they die, but the documents. Did you find them?”

The assistant chuckled awkwardly. “The documents were nowhere to be found, but our informants in the police station mentioned a leather bag. In it was documents about loan sharks, nothing that would come back to us.”

“How’s that possible! He wouldn’t place them elsewhere for something this important!” Park Jonghyun furiously rebuked. “Did the CCTV footage catch anyone else that was there? Who’s involved?”

The assistant scooped his face. “That’s the problem sir. From CCTV footage over at Myeongdong, we found out that the man that entered the underground casino at that time frame was Yang Chen…”

Park Jonghyun was instantly pale as a sheet. After a long moment, he started laughing hysterically.

“It’s a little too late now to figure that out.” The assistant anxiously added. “Chairman sir, what should we do now? If Yang Chen brings our documents and shows it to the CEO, we will be completely…”

The assistant hung his head low fully aware that it was the end of the line for their time in the Starmoon group. They would even be lucky if they just end with a prison sentence now that one more party would readily want them dead, in the form of the North Buyeo clan.

Park Jonghyun solemnly noted. “Go to my office and find the safe. The password is the sum of our birthdays, my father and I. There should be enough money in there for you and a few other guys. Split it among yourselves…”

The assistant was bewildered. “Sir, are you…”

Park Jonghyun appeared grim as he pitifully added. “We’re done, don’t you see? One after another our plans fell dead like flies. All I can say is that the old man’s a lucky guy, with Yang Chen coming to his rescue at the most crucial of times.

After all these years of following me, I’ll give you what you deserve. As for your livelihood, you guys have to rely on each other.”

The assistant got teary-eyed from his emphatic speech. “Chairman! Come with us to the hospital to beg for mercy. You’re one of his own so maybe he’ll go easy on you!”

“Beg? Hmph, if it wasn’t to save face how much do you think he cares about this grandson of no blood relation. In his eyes, only Xu Zhenxiu can be the one to defend our family legacy. If I go to him now, it would be like a suicide mission…”

The assistant was bitter and apologetic. “Then…what do we do? Why don’t you, sir, come with us. I know a smuggler. He can take us out of this country. We can spend some time in a tiny island nation. Who knows, we might even be able to return to our former glory one day!”

“Who are you kidding? Just watch after yourself. If you stay with me you’re bound to die. Smugglers? How do you think that old fag Park Cheon manage to dominate Asia all these years? If he wills it so, I will have nowhere to run. It’s fine, I have to deal with one last thing, take the money and fend for yourself.”

After he finished, Park Jonghyun grabbed the car keys and casually walked out of the house.

The assistant hesitated for a moment before his face twitched, he clenched his teeth and dashed straight towards Park Jonghyun’s office upstairs.

But before he could make it to the stairs, a loud bang was heard!

The next moment, the assistance felt the smoke coming out of his chest as blood crept through. He turned stiffly towards the man behind him, his eyes filled with desolation and fury.

Park Jonghyun stood by the gate, blowing smoke off his gun as he smirked.