Support
Random Novel
After Brushing Face At The Apoca 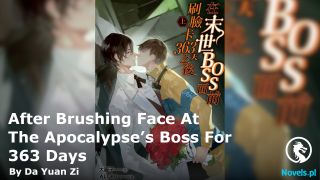 Hu San’s lifespan was at its end! He did not have much time left!

However, with the aid of the blood concentrated crystals, this could be solved!

“Oh? You’re here?” Hu San opened his eyes as the ice that was layered on his body began to melt.

“Yes. Thanks for waiting this long for me, Sir!”

“Heh, if chilling for this bit of time is considered ‘waiting for a long time’, then I’d be worried about me having a bad reputation. Haha!”

It only took three minutes for Qin Feng and Bai Li to get there after all.

Qin Feng gave Hu San a modest smile. He had great respect for this old protector of the Northern Region. Then, he took out the fifty blood concentrated crystals and showed it to the old man.

Even though he had heard it via the communicator, Hu San still could not help but to feel excited from seeing the crystals.

These items should be enough to solve his problem!

Then, he took a long pause before taking out a small box—a small crystal box.

And it was quite clear that it was not some ordinary crystal box. Qin Feng could feel raging energy vibrating out of this box.

It was clear that this crystal box was made of pure energy.

Inside the box was an eight-petal Snow Lotus. The lotus’ presence was completely sealed off by Hu San; but the leaves around the Lotus seemed to be brimming with life. From a distance, the flower looked like a lotus that was made by jade.

Qin Feng, of course, knew what this lotus was—this was the Snow Jade Lotus, an S-tier herb!

Hu San said, “I’ll trade this with your crystals.”

“Erm…” Qin Feng was stunned. Hu San was an S-tier champion so it was quite clear that he had plenty of resources to spare. However, this S-tier herb was a priceless treasure! This trade would benefit Qin Feng by a thousand fold!

To make the trade a fair deal, Qin Feng should instead trade this lotus with his S-tier blood concentrated crystal. However, since he did not mention it earlier in the communicator, there was no reason to mention it now too!

“Sir, this lotus is too precious. This trade is too unfair on your end. Besides, you saved my life before and I haven’t even repaid the favor yet. For that, I can’t take advantage of you, Sir.” Qin Feng said earnestly.

However, Hu San shook his head and replied, “Repaying the favor? Bah! There’s no need for that, boy. I saved you so that I could gain some karma. And sure enough, the karma is paying off right now. Don’t worry about this lotus. I’ve cultivated these lotuses myself and I’ve had plenty of them for snacks. The lotus would not do much for me anymore. But these crystals would be a great help to me. So, I would consider this a good trade. You see. I am new in this realm and it’s not really easy to hunt down these Gorefiends too… and there’s not much fight in this old sack of bones now…”

It actually was not that difficult to kill these Gorefiends. However, hunting them down would take a lot of energy. This would take too much time and energy, which he did not have.

As such, even though this trade was seemingly unfair for Hu San, to him this was good enough because it would save him a great deal of time.

Upon hearing this, Qin Feng finally accepted it. This Snow Jade Lotus was quite valuable to him. At least, when ascending to A-tier, this lotus would be very useful.

However, after giving it a brief ponder, Qin Feng added, “How about this, sir? I’ll give you a bottle of Glittering Gold Sand. This should at least cover some of those losses in this trade.”

Right now, the most valuable item that Qin Feng could trade out was the Glittering Gold Sand.

“Oh? You have more of these goodies too?”

Qin Feng smiled but did not admit it. Officially, Qin Feng had given all of the Glittering Gold Sand to Shang Han. Right now, even though everyone knew that Qin Feng still had the sand on him due to how rapid the development of Fengli City was, no one was able to find this treasure from his turf.

Besides, Qin Feng had a lot of money on him; so, there was no point in selling the Glittering Gold Sand.

Thanks to that, he could still hold onto it until this day.

Qin Feng took out a huge bottle of Glittering Gold Sand. The sheer amount of energy that was brimming from the bottle gave some healing warmth to Hu San. Seeing this, Hu San did not reject, and accepted them.

“Qin Feng, since you’re here, perhaps you could help guard me for the moment.”

Then, Hu San opened his mouth and swallowed the blood concentrated crystals.

When they entered his stomach, Hu San could feel that these crystals had turned into pure life force that was absorbable by his body.

Hu San’s pale face instantly turned red and lively, like he had eaten some really good supplement. His humpback was starting to get straightened up too.

The blood concentrated crystals were quite magical in healing one’s body. It was not only able to prolong one’s lifespan, it was quite easy to be absorbed. This meant a great deal to many ability users because not many had the same Absorption Ability that Qin Feng had.

Qin Feng and Bai Li looked at one another before walking out of the snowy house. As soon as he walked out, Qin Feng could feel a blaring presence nearing them.

Then, the powerful heat raged at his face, almost like it was trying to melt the freezing snow behind him.

In the next second, a black man appeared in front of Qin Feng.

“Oh, look at what the cat dragged in? Hu San, what are you doing in my turf, huh? Are you here to be killed by me? It’s been so long that I thought you have already turned into an ice zombie! Hahahahaha!”

The man was cloaked in raging fire as he spread a revolting grin on his face, like he was trying to be funny. It looked like this was a mad man.

And this man was indeed mad.

He was the most powerful man in the North African Republic Alliance. Well, specifically the Dark Coalition in North Africa.

He was Ayshan, the “Hellfire Ifrit”!

This man was trying to cause trouble for Hu San!

“Right away!” Bai Li quickly raised her hand and enveloped the snowy house with a layer of silver fog.

“My apologies, Sir. Mr Hu San has something important to do so he can’t entertain you right now.” Qin Feng spoke in a cold voice.

Ayshan raised his eyebrow and looked at Qin Feng. The lecherous look instantly turned into one of belittling.

He raised his hand in disgust, “Heh, and just what kind of small prick are you?”

Then, a massive fire dragon was summoned from his hand, which darted straight at Qin Feng.

If Qin Feng stepped aside to evade this attack, the Spatial Seal behind him would immediately be smashed to pieces. Bai Li’s Spatial Seal could not withstand a strike from an S-tier!

As such, Qin Feng could not afford to evade this attack!