Support
Random Novel
A Step into the Past 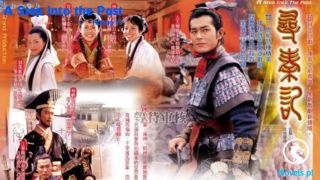 The sun kept setting behind them and it was about to fall under the endless sea in the distance.

With the light of dusk falling, it dyed the sea orange yellow. Reflecting off the yellow paint of the “Unfolding Wings”, the “Morning Sun”, and the “Goddess of Victory Iris”, it looked very good.

Narvil narrowed his eyes and looked at the endless sea behind him before and looked at the same endlessness in front of him. The sea was already getting dark, so he nodded and said to his assistant, “Tell them to start decreasing the speed and enter night sailing.”

The assistant received this order and after a while, the Unfolding Wings slowed down. The Morning Sun and the Goddess of Victory Iris on its sides behind it also slowed down, maintaining a triangle formation. They sailed on the boundless seas, heading in an easterly direction.

Narvil came to the railing and leaned over to look at the sea.

Although they had decreased their speed and the waves the Unfolding Wings created was smaller, it was still countless times bigger than any boat that Narvil had sailed on before.

If they slammed into a wave, the spray that came from it could even reach several meters.

Narvil had spent many years on the sea, he always liked watching the spray that came from the waves hitting the boat.

However, before this, he had never seen a boat like this Unfolding Wings. With such high waves from the sea, it was still able to sail forward this steadily.

Steady and safe, that was the deepest feeling that Narvil received from the Unfolding Wings in the last three months.

Compared to the wooden boats Narvil sailed, the Unfolding Wings was tens of times bigger. Moreover, because it was completely made of steel, it was very steady when it sailed on the sea.

When he sailed with the wooden boats before, whenever they met a large wave, the boat would sway. It would make one feel like the boat would flip over at any moment.

But on the Unfolding Wings, a normal wave couldn’t affect it at all. Being on deck was just like being on land.

Even if they met the larger and stronger waves, the Unfolding Wings would be able to steadily sail forward. It wouldn’t shake at all and made people feel very assured.

Thinking of this,Narvil couldn’t help thinking of what had happened three days ago at night.

Three days ago, the fleet had passed through a bay at night and they were suddenly hit with a storm.

The storm had been fierce and the situation was bad. If they met this kind of violent storm on sea before, they wouldn’t have any chance of returning alive.

However, when facing this violent storm, the three large Magic Ships displayed an ability that far surpassed the normal wooden boats.

Although the hull would shake, the ship still sailed very steadily.

When the storm was over and the sea returned to normal, including Narvil, everyone was feeling a bit of disbelief.

The people of these three boats were all old sailors who had spent many years on the sea, they knew about the dangers of the sea better than normal people. So they were very clear just how dangerous the sudden storm was, even most people had thought that it was a death sentence.

But no one would have thought that the three Magic Boats would be able to pass through this danger so easily.

After everyone escaped from death, they had a new understanding and trust of the abilities of the three Magic Ships.

If it was said that when they set out from the Frestech Harbour, everyone was feeling a bit nervous about the journey ahead, now that they had experienced this storm, everyone was filled with confidence.

Everyone believed that with these three powerful Magic Boats, they could even sail to the furthest corners of the world!

But he was the commander of this fleet, so he had to consider things more realistically.

Since setting out from the Frestech Harbour, it had been close to twenty days.

Based on the nautical charts, they had already completed half of this journey.

If they approached the shores now, they would already enter the borders of the Rudson Kingdom.

If nothing unexpected happened, as long as they continued forward for less than a week, they should arrive at Nissi City.

Actually, with the max speed of forty kilometers an hour for these three Magic Ships, they didn’t need to use that long. They could have made the trip in less than a week.

But because this was their first time and this fleet was not just carrying cargo to Nissi City, but also to explore the route and lay the foundations for future trips.

During this entire trip, Narvil had been very carefully and strictly controlled their speed. He had been recording all the details of the surrounding sea area and drawing nautical charts, so they had been moving quite slow overall.

Although going this slow was safer, it brought quite a few problems.

The first problem was their logistics.

Even if Narvil had set a time of one month for their journey when they set out from the Frestech Harbour and had prepared a month of supplies accordingly, there were many accidents that couldn’t be avoided on this seafaring voyage. It caused them to consume their supplies much faster than Narvil expected.

With the current supplies the Magic Ships had, it would support them for around ten days.

In theory, that should be enough for the fleet to make it to Nissi City.

But if another accident happened, it would be hard to say.

The other supplies were easier, but once they were out of fresh water which was the most important thing on the open seas, they really couldn’t do anything.

Thinking of the gravity of the situation, Narvil couldn’t help thinking of what sir chairman had told him before leaving. He said that he was considering developing a Magic Water Purifier.

If they could develop this thing and bring it on future voyages, it would be much more convenient.

But right now……they had to solve their current problem.

Narvil looked at the boundless sea in front of them and he looked up at the observation deck in the middle of the Unfolding Wings. He picked up the Magic Communicator and said, “Metz, look properly for me. If there is any island that is near us, tell me ahead of time. We will head to those islands to get more supplies.”

“Roger!” There was a very casual voice that came from the Magic Communicator before it said in a lower voice, “But captain, it’s already this dark, we can’t see anything.”

“Stop wasting words, just watch if I want you to watch. It isn’t just today, you have to pay attention to this every day from now on, understood?” Narvil said in a deep voice.

“Oh, I got it. But I’ve been watching the whole time and I haven’t seen that many islands. I say, captain, is there a problem with the route we chose? I feel that if we approach the coastline, there will be more islands.”

“Do I need you to say this?” Narvil angrily reprimanded.

If possible, of course he knew that it was safer near the coast and it would be easier to obtain supplies.

But even if the three Magic Boats were good, there was still a problem. They were too big and because they were cast from steel, making them very heavy, they sunk deep into the water.

If they approached the coastline too much, it was fine if they were familiar with the area. But if they weren’t, there were many hidden rocks and if they bumped into those hidden rocks, they would be stuck.

If this really happened, he wouldn’t have any face to see sir chairman again.

Then again, the main duty of this fleet was to verify the sea route. So Narvil chose a route that wasn’t too clear.

But the route he chose didn’t have any islands that were suited for being supply depots, so they couldn’t supplement their supplies.

Because he was worried about this matter, when he heard Metz being mouthy about this, he naturally didn’t feel good.

Metz was an old crew member under Narvil, so naturally he could hear the bad tone in his voice.

He reached his head out to look at the deck and he saw Narvil pacing back and forth there. He knew that he was pondering this problem, so Metz stuck out his tongue and without saying a thing, he turned to look at the sea.

The sun was already halfway over the horizon and the sea in the east was already dim. Even if Metz’s eyes were good and he used the telescope, he couldn’t see anything at all.

Looking around, Metz muttered something. When he was about to put down the telescope and rest, he saw a group of black dots appear in the distance that were quickly approaching.

Metz was stunned before quickly reacting. He jumped up and shouted at the deck below in a loud voice.

This sharp cry spread to everyone on the deck and everyone was instantly surprised.

Pirates, this wasn’t an unfamiliar word for these people who had spent many years on the sea.

But they had been on this route for more than ten days now and perhaps because their route was deep in the sea, avoiding the places near the coastline, it had always been very peaceful, so they had almost forgotten about the pirates.

They never thought that once they entered the sea area of the Rudson Kingdom and when they weren’t far from their goal, they would bump into pirates.

Hearing Metz’s cry, Narvil stopped. He first turned to the observation deck before looking forward, but he couldn’t see anything in the darkness.

After being dazed for a bit, there wasn’t any look of fear on Narvil’s face as his eyes filled with joy.