[Holy Shield] had an effect of 15 seconds while [Arrow Rain] lasted for only three seconds.

Just now everyone was looking at Yang Nuo and not on Quan Zhen Sect. With the 12-second difference, it was enough for Wang Yu to dash to Yang Nuo and saved her.

As to why Wang Yu dodged the arrows while waving his weapons, it was definitely to divert attention…

Everyone thought negatively of him as Wang Yu was so well-known so he definitely had to cheat and lie his way into it. After all, based on Quan Zhen Sect’s characters, they were capable of doing such things.

Just now when Wang Yu saved Yang Nuo, his operations were very impressive but compared to his later movements, it was not comparable. Now that everyone thought Wang Yu was cheating, they also neglected his earlier operations.

Seeing everyone agreeing with Lucifer, Mo Xiaobei snarled, “Hmph! If you can’t do it, does it mean that no one else can?”

Mo Xiaobei was not defending Wang Yu because of Rolling Mario. She simply could not stand Lucifer’s condescending attitude.

“Oh? Do you have another explanation?” Lucifer lifted an eyebrow and asked Mo Xiaobei.

“No!” Mo Xiaobei was annoyed, “But I won’t be like you and think the worst of others. Since you know it so well, seems like you did a lot of such things for fame too.”

Undeniably, when women were quarrelling, they had a sharp tongue. In an instant, she redirected all eyes towards Lucifer.

Everyone in the waiting room threw suspicious glances at Lucifer.

Lucifer was not the only one with some wit. When Lucifer explained his thought, some other spectators also thought so.

Everyone only cared about anything impressive for a short while but when it came to someone’s wrongdoing, everyone kept it in mind for a long time.

Initially, everyone did not believe Wang Yu had such an ability. Hearing such an explanation instantly made them see him as a cheater instead of a god-like person.

“Damn, I almost got cheated by this b*stard!”

Other than Twilight City’s players, other players did not attempt to cover up their despise for Wang Yu, pointing their middle fingers at the large screen.

“Don’t let them get away!” Wilted Old Tree reacted and ordered his teammates once more.

However, Ambilight and Desert Populus were in their skill cooldown time. Wilted Old Tree also knew that normal attacks could not hold back the two of them.

After all, Yang Nuo was Quan Zhen Sect’s only player who could attack across the bridge. So long as they killed her, Quan Zhen Sect was left to be beaten up.

Receiving Wilted Old Tree’s order, Team Peaceful’s two Warriors with large swords lifted the swords and chopped down on the wood tied to the bridge.

“Sh*t, this is a dismantlable scene!”

Seeing how their opponent wanted to break the bridge, Fearless quickly sent a message to Wang Yu and Yang Nuo, “Stop acting cool on the bridge, quickly come back.”

Wang Yu and Yang Nuo could not fly so they fell down alongside the bridge.

“We are screwed!” seeing their two experts fall into the deep abyss, Quan Zhen Sect was petrified.

In this scene, Wang Yu could die but if Yang Nuo died, Quan Zhen Sect was a goner. Every one of them understood this.

“How? We can’t go on like this,” Ming Du said, panicking.

“If it can be broken, it can be built. Who knows carpentry work?” Frost Blade asked as Carpenters could repair the maps of dismantlable scenes.

“What, moving bricks and building bridges is what we are going to do?” Ming Du and Vainglory were upset.

Fearless also said, “Yes, how can you ask us to do such work meant for dogs? Do you know how insulting it is?”

“I know!!” Spring Halo clenched his fist and gritted his teeth in anger.

“Brother Spring, what is your secondary job?” Just then, everyone realised that Spring Halo was an earth and wood Engineer so they quickly asked him.

If no one knew carpentry work, the bridge could not be repaired. As everyone expected, with a deep abyss separating them, without an Archer, Quan Zhen Sect was in a passive position.

“See, as I said, brute force is worthless when there are battle tactics and intelligence!” Wilted Old Tree said proudly as he pointed at the opposite Quan Zhen Sect who had no way of defending themselves.

Now, Quan Zhen Sect could only be beaten up. Even if they did not surrender, they could not win.

Noticing their dire situation, at such a crucial time, Quan Zhen Sect placed their last hope on Fearless.

“Old Bull?” Everyone heard him and quickly looked at the scoreboard. Indeed, Wang Yu’s name was still lighted up.

“What use is there for Old Bull to be alive? He isn’t an Archer.” Quickly, everyone was demoralised again.

With such attack distance, unless they had an Archer, any other jobs could not turn the tide around. Furthermore, Wang Yu was a Pugilist which had the shortest attack distance.

“Hehe!” Fearless laughed, “Old Bull’s attack distance isn’t far but he might be able to reach them.”

Fearless just finished and suddenly, the spectators screamed. At the bottom of the abyss on Quan Zhen Sect’s side, a body flew up towards Team Peaceful’s side. That body was none other than Wang Yu’s.

It was as though Wang Yu was climbing steps, he jumped four consecutive times, each time around six to seven metres far and two to three metres high. In a few moments, Wang Yu reached Team Peaceful’s side of the cliff then quickly started vine climbing. Team Peaceful’s people were staring opposite and were completely oblivious of what was going on beneath them. 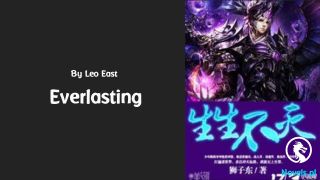