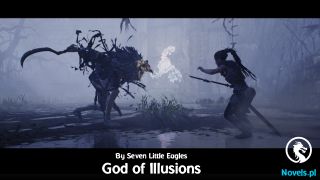 Chapter 1013: A Riddle of Disappearance

Soon after Zu An left the room, someone standing in the distance turned around and walked toward him, saying, “I greet Sir Zu. I am Gong Pan. The madam has said that you have something to ask me.”

“Sir Gong is too polite. There were just some things I wanted to ask about.” Zu An carefully examined the middle-aged man in front of him. He had a strong and sturdy build, and his gaze was steady. Zu An could tell that his cultivation was definitely not low. He had thick brows and big eyes, and the first impression he gave Zu An was that of an experienced and knowledgeable person. There was also a knotted scar by his neck, making him look tough.

Gong Pan subconsciously rubbed his scar when he noticed that Zu An was looking at it. He explained, “I got this back when I fought against a fiend race expert. If this wound had been even half an inch lower, I wouldn’t be in this world right now.”

“Sorry.” Zu An felt a bit apologetic. After all, staring at that wound really wasn’t too polite.

“It’s fine.” Gong Pan had an open-minded smile on his face. “Those who meet me for the first time often look there. This isn’t a disgrace for me, but rather a glorious memory. This wound proves that I fought against the fiend races head-on.”

“The fact that General Gong was able to survive after having a wound like this means that there are great blessings awaiting you after the misfortune.” Zu An sighed inwardly as well. Such a wound really was too treacherous.

“I don’t care if there are blessings or not; I only hope my duke is well.” Gong Pan sounded dispirited as he continued, “It was because the duke pulled me an inch to the side that I avoided that fatal blow. Unfortunately, even though I survived, I have no idea how the duke is doing right now.”

Zu An took the chance to ask, “What exactly happened to the duke?”

He had already looked through the corresponding files the local officials provided, and he had even submitted a report to the court. Unfortunately, there were too many details missing, and there were too many contradictions. It was much better to ask those directly involved.

Gong Pan was a bit hesitant. A while later, he said, “Since the madam asked for my assistance, that means Sir Zu is someone worthy of trust. Please follow me.”

Afterward, he led Zu An to a spacious courtyard. Only after making sure that no one else was listening in did he say, “The entire matter of the duke’s disappearance is extremely bizarre. Back then, the duke suddenly decided to go into seclusion for a long time. When it was time for him to come out, there was no sign of him. At first, no one treated it as a big deal. After all, cultivators wouldn’t always leave seclusion on time.

“But after ten days, there was still nothing. Only then did we try to inquire when the duke was coming out. Yet we still didn’t get any response. Then, we noticed that the doors weren’t locked, and that the inside was already completely deserted.

“At first, we all thought the duke left earlier to go somewhere else. That kind of thing has happened before. But after a few months passed, there was still no sign of the duke’s return. We then realized something was strange.

“We sent out a lot of people to search in places the duke might have been in, but we unfortunately didn’t find him. Even though there have been people who claimed to have seen the duke appear in the commandery from time to time, when we looked into them, we found that they were all just making up nonsense to try and cheat us for a reward.

“Another half year passed just like that. The duke never appeared. Only then did we realize that something bad might have already happened to him.” As Gong Pan spoke, he clenched his fists so tightly that his knuckles cracked. He was clearly stirred up by the subject.

Zu An asked seriously, “Who was the last one to have met the duke and when?”

Gong Pan thought for a bit, then replied, “There were many people there the last time he was seen. At the time, the duke invited the second master for a drink, and there were many maids and servants tending to them. I was also there. We all saw him.”

“That wasn’t the case,” Gong Pan replied. “We were all at their side in the beginning, but later on, the duke wanted to talk about some matters with the second master in secret, so he had us withdraw. Even though we weren’t there, we could still see two silhouettes chatting behind the window. They continued to chat, and we could even hear laughter from time to time.

Zu An frowned. The fact that Gong Pan hadn’t really seen them directly meant there was a lot of room for manipulation. There were many similar cases in the detective novels he had read.

“Could it be that something already happened to the duke then? That the figures you saw and the voices you heard might have actually been imitated by someone else?” Zu An asked.

“That’s impossible!” Gong Pan directly refuted him. “We’re all the duke’s most trusted people; no one knows his build and voice better than us. If someone tried to impersonate him, we would definitely have been able to distinguish between them.”

Zu An frowned. He just felt that sort of judgment was too arbitrary. Someone’s build could look very different through the mirror, and for things like voice… There were a ton of eccentrics in this world. Surely there was someone good at vocal mimicry out there. The ‘Face of a Thousand Identities’ alone spoke of how to perfectly imitate the voice of one’s target.

But after thinking about it, he realized such manuals were probably not too common either. After all, he was an Embroidered Envoy, but he had never heard of anyone being capable of something like that.

Gong Pan continued, “Even if we take a thousand steps back, even if that person was an impostor, how could he have possibly accomplished something like this? After all, the duke’s cultivation is already at the peak of the master rank; he’s one of the best cultivators in the world. Who could silently assassinate him in such a short amount of time, and under our very eyes no less?”

“What if the second master assisted that person?” Zu An stared straight into the other party’s eyes.

Gong Pan’s expression changed, but he still replied, “That’s impossible. Even though second master’s cultivation is high, he’s still lacking compared to the duke. The duke could even fight him without using one of his hands as a handicap and still win, let alone with all of us waiting outside.”

Zu An remained silent for a moment. He could suspect someone of mimicking the man’s voice, but cultivation wasn’t something so easily replicated.

If Jian Yanyou hadn’t been on guard at all, there might have been a chance of his younger brother taking him down by surprise. But with his cultivation, there was no way he would be taken out without causing a huge scene. The guards outside would have stormed in as soon as he called out.

Could it be that I guessed wrong? Zu An remained silent for a bit. Then, he suddenly asked, “What kind of a relationship does the madam have with the duke?”

“The madam?” Gong Pan’s expression suddenly changed. He asked, “You’re not suspecting the madam, are you?”

Zu An waved his hands and said, “I’m your madam’s friend, so how could I suspect her? I’m just asking out of curiosity. I heard her mention that she doesn’t live together with the duke.”

Gong Pan hesitated, but then said, “Indeed, the duke and madam live separately. However, that’s because the madam has to manage the Yu clan’s affairs, while the duke needs to take responsibility for Cloudcenter Commandery’s safety and fend off the fiend races’ invasions. The two of them rarely met and were more often apart, which was why they lived apart. But their relationship is good. There’s always been mutual respect between them.”

“So they treat each other with mutual respect.” Zu An raised his eyebrows. Those words could be interpreted from two different angles. The first was that the spouses were indeed compatible and harmonious; the second was that there was no real love, but rather, each person merely fulfilled their own obligations…

“This might be a bit bold of me to ask.” Zu An looked at Gong Pan and asked curiously, “So why did you come to the Yu clan? Normally speaking, you should be someone from the Duke Manor.”

Gong Pan looked somewhat downcast as he explained, “After the duke went missing, everyone was still unified in the beginning. But as time went on, and we couldn’t find where he went no matter how hard we tried, so many things began to change.

“But that was to be expected too. Many people have families to support. Some people had their future prospects to worry about, and naturally sought out new patrons to rely on.”

Zu An asked to test the waters, “Is the patron you’re talking about the second master?”

Gong Pan nodded and explained,“Indeed. He’s the duke’s younger brother, and he was the second most authoritative figure in the Military Affairs Manor as well. He has many trusted aides under him. After something happened to the duke, it only made sense for him to take over. Many people didn’t necessarily want to follow him, but as they worked with him, as time went on, they already unknowingly became his men.

Zu An nodded. That was something he could understand. Others might rely on Jian Taiding, but Gong Pan was the guard captain of the previous duke and his trusted aide. He wouldn’t be put in an important position even if he went over to the second master, so staying with Yu Yanluo was a sensible choice. At the very least, he would retain a reputation of loyalty.

“Judging from your tone, it seems you don’t bear any enmity against Second Master Jian, no?” Zu An asked curiously.

Gong Pan looked toward the north and said with a calm expression, “Unless the duke’s disappearance really had something to do with the second master, why would I hate him? It’s only natural for him to have taken in the duke’s former subordinates. Even if I were in his position, I would most likely do the same.

“Furthermore, the Duke Manor is vital to the safety of Cloudcenter Commandery; we still have to fend off the fiend races who invade the borders. We need a powerful leader to stabilize the situation after the duke’s disappearance. A capable and ambitious leader will always be much better than a mediocre one.”

“General Gong is an upright and righteous person, as expected. Your bearing is admirable.” Zu An felt sincere admiration for the other man. Afterward, he asked some more about some matters related to the dukedom. The other party replied to all of his questions one after another.

When he was about to leave, Zu An suddenly turned around as if he had just remembered something. He asked, “By the way, would it be possible to give me a list of all of the duke’s personal guards?”