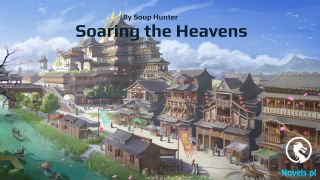 Due to Huang Xiaolong's incident, the banquet’s merry atmosphere dampened slightly, and everyone spoke in hushed voices to avoid attracting attention.

Seeing the situation, Wu Zetian hesitated but still said to Huang Xiaolong through voice transmission, "Brother, I advise you to leave. By the time the banquet ends, you might not be able to leave anymore.”

Although Peaceful Sea Emperor did not mind Huang Xiaolong’s action, what about later after everyone left?

An Emperor’s prestige couldn’t be insulted. For those who dared to do so, exterminating their family was considered as a light punishment.

Huang Xiaolong seemed surprised as he looked at the middle-aged man Wu Zetian. Although Wu Zetian gave him a warning through a voice transmission, it increased Huang Xiaolong’s goodwill towards him.

“Don’t worry. If I want to leave, a Peaceful Sea Emperor Palace can’t stop me.” Huang Xiaolong smiled and replied to Wu Zetian.

Wu Zetian was momentarily dumbfounded by Huang Xiaolong’s reply and gave up on persuading him further.

Everyone turned and saw a group of experts clad in the Luring Lighting Clan’s standard brocade robe arriving in the whistling winds.

The person leading the group was a short and rounded middle-aged man with a lightning-shaped divine rune on his forehead. Half a step behind him was a handsome young man.

Both of them exuded the aura of an Emperor Realm expert.

No doubt, one of these two was the Lightning Clan’s Patriarch, Lei Kaiyuan, while the other was his personal disciple, Chen Nan, who had recently broken through to Emperor Realm. He was the main character of the celebration ceremony this time.

This Lightning Clan’s group would have to pass by the guests sitting in the outer halls to enter the inner hall.

Seeing the Lightning Clan’s Patriarch Lei Kaiyuan and Chen Nan, the guests sitting in the outer hall stood up again to welcome them.

Huang Xiaolong blanked for a second when he saw Chen Nan, then stood up with an unexpected and unbelievable expression on his face.

Seeing that Huang Xiaolong had actually stood up this time, the middle-aged man Wu Zetian inwardly heaved a sigh in relief. Did this brat finally figure it out?

Moments later, Lei Kaiyuan, Chen Nan, and the rest of the group descended at the outer hall, then walked into the inner hall.

After Lei Kaiyuan’s group entered the inner hall, the guests outside returned to their seats once again.

But Huang Xiaolong was still standing. Soon after, the guests in the outer hall saw him walk out from the obscured corner, and their gazes continued to follow him.

Huang Xiaolong ignored these curious glances and strode straight through the entryway to the inner hall.

“What does this kid want to do? Enter the inner hall?” One of the experts sitting in the outer hall snickered mockingly.

“Haha, who knows, maybe when the Peaceful Sea Emperor sees him, he would pardon that kid and even give him a seat inside.” Another expert chortled.

As the others ridiculed Huang Xiaolong behind his back, he had reached the entryway to the inner hall.

The two Lightning Clan’s Grand Elders standing guard at the entryway pulled their faces straight, seeing Huang Xiaolong appear. One of them reached out and blocked Huang Xiaolong, “This friend, please return to your seat in the outer hall.”

But Huang Xiaolong’s gaze was fixed on Chen Nan, and he ignored the two of them and strode into the inner hall.

His action instantly enraged the two Lightning Clan’s Grand Elders. Both reached out to grab Huang Xiaolong with the intention of throwing him out.

The next thing they knew was that a shadow blurred in their views, and before they understood what was going on, pain coursed through their bodies as both were thrown towards the inner hall.

Loud, crashing noises sounded as they fell to the floor.

Wu Zetian and the others in the outer hall were agape with shock. None of them could see how Huang Xiaolong had thrown the two Lightning Clan’s Grand Elders. Not to mention that these two Grand Elders were no weak chickens. Both of them were Tenth Order Heavenly Monarch Realm experts.

As the two Lightning Clan’s Grand Elders smashed on to the inner hall’s floor, everyone in the inner hall turned to look, disturbed by the commotion.

In this short moment, Huang Xiaolong had already entered the inner hall.

Who would have thought that this kid would actually dare to make trouble on an occasion like this? This was contempt to the Luring Lightning Clan, contempt towards him.

Initially, Peaceful Sea Emperor had planned to wait until after the celebration ceremony had ended before sending people to deal with this kid. Now, it seemed like it won’t need to wait for long.

On the other hand, when Chen Nan, beside Lei Kaiyuan, got a clear look at Huang Xiaolong’s face, he turned deathly pale. The fear in his eyes was obvious.

Then again, neither Lei Kaiyuan nor Peaceful Sea Emperor, or anyone else noticed Chen Nan’s expression.

Lei Kaiyuan’s merry expression turned gloomy in an instant as he stared fixedly at Huang Xiaolong, “Who are you? Aren’t you being recklessly arrogant, not putting others in your eyes? Breaking into my Luring Lightning Clan’s celebration ceremony and injuring my clan’s Grand Elders? If you don’t give me a good explanation for this…”

Lei Kaiyuan and others were baffled and surprised. Old friend? Does this kid know Chen Nan?

In the outer hall, Wu Zetian and the others were astounded hearing that.

But Chen Nan’s face was distorted with fear, and his feet moved back subconsciously as he muttered, “Huang, Huang Xiaolong!”

Huang Xiaolong! Chen Nan’s voice wasn’t loud, but these three words were like a thunderbolt across clear skies. The name thundered in everyone’s ears.

Everyone looked at Huang Xiaolong with an incredulous expression. After the Battle of the Heavenly Court and also the destruction of Fiend God Emperor Palace, there wasn’t a person in the Divine World who hadn't heard of Huang Xiaolong’s name.

Peaceful Sea Emperor, who had been sitting leisurely, was so frightened that he jumped up from his seat, and his voice trembled as he spoke, “You, you are His Majesty, the Nether King?!”

Although he had not gone to spectate the Battle of the Heavenly Court and had merely exited seclusion recently, he could hear people at the Peaceful Sea Emperor Palace talking about this newly risen Nether King Huang Xiaolong on a daily basis.

“Emperor, it, it can’t be, right? It must be someone with the same name…?” The Peaceful Sea Emperor Palace’s Hall Master was panicking as he stood up from his seat.

How could there be such a coincidence? The Nether King that deters the four directions was standing right in front of them? And he was actually seated in the outer hall? The Peaceful Sea Emperor Palace’s Hall Master felt that this was simply ludicrous.

“That’s right. It must be the same name!” Wu Yichun from the Azure Firmament Emperor Palace, who had come with Huang Xiaolong interjected, “He’s just a disciple from the Ele-lynx Clan.”

Peaceful Sea Emperor, Lei Kaiyuan, and the others were too astonished to speak.

Ele-lynx Clan’s disciple? Huang Xiaolong did not bother with Wu Yichun, Peaceful Sea Emperor, and the rest. His attention was fully on Chen Nan as a smile spread over his face, “Fang Chu, I had not expected you to be a disciple of the Lightning Clan. It’s astounding, ah. I have been searching for you high and low for several hundred years, but who would have thought that your main body was hiding here!”

This Chen Nan was the main body of Fang Chu’s avatar in the lower realm! From the time Huang Xiaolong had spotted Chen Nan, he knew!

Chen Nan and Fang Chu’s souls were of the same origin. Although they looked different, their names were unrelated, and Huang Xiaolong knew it in a single glance.