Support
Random Novel
Madam, Your Sockpuppet is Lost A 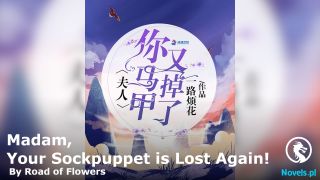 When the five pieces of flesh were torn off by the Five Yin Fiend Ghosts, he could clearly sense that his blood qi and lifeforce had decreased slightly!

The Dragon Phoenix True Body’s expression changed as though he sensed something!

Something was not right!

His lifespan was decreasing!

The bite of the Five Yin Fiend Ghosts would not only devour the blood qi and lifeforce of the Dragon Phoenix True Body, but also his lifespan!

Of course, that devouring speed was far less terrifying than the Time Saber.

A single bite from a Yin Fiend skeleton could only devour about a thousand years of the Dragon Phoenix True Body’s lifespan.

However, if the five Yin Fiend skeletons bit at the same time, it would mean that the Dragon Phoenix True Body would lose 5,000 years of lifespan instantly!

What was even more frightening was that the five Yin Fiend skeletons clung onto the Dragon Phoenix the entire time and could not be shaken off.

Although the Dragon Phoenix True Body had a lifespan of hundreds of thousands of years, he could not defend against such expenditure!

The Hell Witch Emperor sneered with a dark green gaze. “Desolate Martial, do you think that you’re the only one who knows divine powers and secret skills that can reduce one’s lifespan?”

Before the Hell Witch Emperor could finish his sentence, the five Yin Fiend Skeletons opened their mouths once more and tore off a large piece of flesh from the Dragon Phoenix!

In less than two breaths, the lifespan of the Dragon Phoenix True Body was reduced by 10,000 years!

Ever since he comprehended Barren, the Dragon Phoenix True Body had killed many strong foes with this powerful trump card.

His Time Saber had even killed Emperors before!

However, he had never felt such a strong sense of time passing from himself.

In less than two breaths, his lifespan of 10,000 years was gone!

It was an extremely uncomfortable feeling.

It made one feel powerless and crazy!

The Dragon Phoenix True Body did not dare to delay and channeled his blood qi with all his might!

A loud bang sounded from his body!

One after another, incomparably strong demon kings descended. Their claws were sharp and lifelike as they roared into the skies with a tremendous might!

His Bloodline phenomenon burst forth and the five Yin Fiend skeletons were repelled instantly.

The Blood Emperor channeled the Blood Sea and created raging tides that struck the 11 demon kings around the Dragon Phoenix True Body continuously.

A loud bang sounded as the 11 demon kings fought against the Blood Sea!

The Blood Emperor’s countless blood vines stabbed into the ground and circulated the Blood Refinement Fiend Sutra, refining the spilled bloodlines wildly and gathering them in the Blood Sea!

Not only did the power of the Blood Sea not weaken, it became stronger instead!

Even the 11 demon kings could not defend against it and their lights dimmed as cracks appeared on their bodies.

Before long, the 11 demon kings would be devoured by the Blood Sea!

Under his will, the 11 demon kings dissipated and turned into thick demonic qi that surged above his head!

In the blink of an eye, a butterfly the size of ten feet appeared from the surging demonic qi!

The butterfly spread its blood-colored wings with two bright moons imprinted on them, looking at the Emperors present like a pair of eyes.

Compared to the previous 11 demon kings, the blood-colored butterfly was way too inferior in terms of size.

However, the moment the blood butterfly appeared, the initially turbulent Blood Sea calmed down!

The endless Blood Sea seemed to be frozen by an invisible force. It froze and did not move at all. In fact, there were no ripples on the surface of the sea!

The Blood Emperor was not surprised when he saw that.

He had long heard that a blood-colored butterfly would eventually appear in Desolate Martial’s Bloodline phenomenon and was extremely powerful.

That was his Destiny Dharmic Treasure!

The Blood Emperor bit his tongue gently and spat out a stream of Essence Blood onto the Blood Gourd.

The Blood Gourd shuddered and shone with a scarlet light!

The Blood Emperor hollered and threw the Blood Gourd into midair, arriving above the head of the Dragon Phoenix True Body. The mouth of the gourd was facing down towards the blood-colored butterfly.

He controlled the Blood Gourd and an extremely terrifying suction force burst forth from its mouth. The power of divine powers descended and pulled the blood-colored butterfly into the Blood Gourd!

When he saw that, the Blood Emperor grinned. “I’ve long prepared methods to deal with your blood butterfly!”

“I don’t care if you’re a Bloodline phenomenon, divine beast or fiend demon. Once you enter my Blood Gourd, you’ll turn into blood in less than three breaths!”

The moment he said that, the Blood Emperor seemed to have sensed something and his expression changed when he looked at the Blood Gourd in his palm!

He threw out the Blood Gourd in his hands and his Essence Spirit transformed into a blood beam—he had actually abandoned his body and fled far away!

The moment he did that, the Blood Gourd exploded in midair with an extremely terrifying power!

The Blood Emperor’s Blood Vine body was swept into a blood mist by the power and was completely destroyed!

If the Blood Emperor’s Essence Spirit had not escaped in time, he would have died within!

The Hell Witch Emperor’s pupils constricted slightly and he was secretly alarmed.

Even he had not expected that blood butterfly to be so terrifying that even the Blood Emperor’s Destiny Dharmic treasure could not trap it!

Of course, after the Blood Gourd exploded, the blood butterfly dissipated as well.

A look of surprise flashed through the eyes of the Dragon Phoenix True Body.

He was still a little off.

These top Emperors were experienced in combat and had an unparalleled sensitivity towards life and death.

Coupled with their many trump cards, they were extremely difficult to kill!

“Desolate Martial, you destroyed my Destiny Dharmic Treasure. I’m going to drink your blood and eat your flesh!”

The Blood Emperor channeled Blood Rebirth and reconstructed his body. With a pale expression, he roared!

Although he managed to survive, the destruction of his Destiny Dharmic Treasure still caused him considerable injuries.

The Blood Emperor waved his blood vines and took root on the ground, channeling the Blood Refinement Fiend Sutra once more to refine his bloodline and heal his injuries.

At the same time, the Blood Emperor channeled the Endless Blood Sea and launched his final attack on the Dragon Phoenix True Body!

“Your Bloodline phenomenon is already gone. Let’s see how you defend against it!”

The Blood Emperor had a cold expression and his eyes shone with a murderous glint.

On the other side, the Shadowless Emperor said slowly with a cold expression.

He could also tell that the Dragon Phoenix True Body was at the end of his rope and could not hold on any longer!

Without holding back, the Shadowless Emperor conjured a supreme divine power!

Suddenly, dozens of Shadowless Emperors appeared around the Dragon Phoenix True Body. They wielded two sabers and it was difficult to tell if they were real or fake—every single one of them emitted an extremely terrifying aura!

Back at the Ten Thousand Race Meet, the Malevolent Wind Rakshasa Emperor released this supreme divine power against the Eternal Human Emperor.

However, it was easily resolved by the Eternal Human Emperor and he was killed instead.

The Shadowless Emperor was not worried at all.

After all, the Taboo Dragon Phoenix had yet to grow to its peak and was far inferior to the Eternal Human Emperor.

Notwithstanding whether the Dragon Phoenix could tell where his true body was,

Even if he could tell, the Taboo Dragon Phoenix could not defend against his slash!

The final slash was even more lethal!