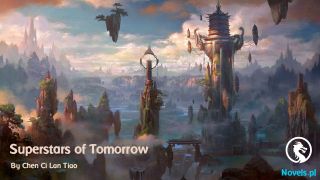 Hearing the rapping sound, Vahn's figure briefly flickered out of existence before appearing next to the door in an instant. His movement was so swift the third knock was still reverberating around the room, so, as could be expected, the person standing on the opposite side was quite surprised when he suddenly opened it and said, "We meet again." with a smile.

Not expecting Vahn to answer the door, much less so quickly, Sandora momentarily froze in place before adopting a smile of her own and asking, "Are you always this mischievous?"

Nodding his head in affirmation, Vahn surprised Sandora a second time by looking past, or, more specifically, over her head and observing, "I see you've been getting along with my daughters."

Confused by Vahn's words, Sandora turned her head to confirm the only people standing behind her were her Ebony and Raven, her personal Handmaidens…

Though they were surprised by their father's sudden disclosure, Ebony and Raven simply giggled in response to Sandora's confusion before moving around her, grabbing Vahn's arms, and sonorously chorusing, "We told you before, didn't we? Our Papa is the most amazing person in the entire Little Garden."

Seeing Ebony and Raven happily snuggling up to Vahn as he affectionately caressed their heads, Sandora was at a complete and utter loss for words. Countless questions surfaced in her mind, but, before she organize her thoughts, Vahn left her reeling as he explained, "I asked them to look after you a few months ago. This may come as something of a surprise, but I took an interest in you long before you penned that letter. I just never thought our relationship would start out as spouses-to-be…"

Tapping Ebony and Raven's shoulders, Vahn gently coaxed them to release him before taking a step forward and kneeling in front of the understandably shaken Sandora. Due to their rather substantial size difference, this brought them to around eye level as he reached out, grabbed her left hand, and said, "I know you've been wondering why I agreed to marry you. Since we're about to announce our engagement to the senior members of your Community, allow me to put your concerns to rest…"

Staring into Sandora's quivering gaze, Vahn adopted a sincere but slightly serious look as he said, "I agreed to your proposal because you're an amazing person. You're kind, caring, and, above all, one of the most selfless individuals I've ever had the pleasure of meeting. You have your faults, sure, but there are people ten times your age that have accomplished less across multiple decades than you have in the past four-and-a-half years…"

Shaking his head, a hint of exasperation and loneliness could be seen in Vahn's gaze as he looked into the petite dragoness's now widened eyes and whispered, "The world desperately needs people like you, Sandora. And, if I'm being perfectly, so do I. As powerful as I may seem, I could never have made it this far without a plethora of amazing people supporting and pushing me forward. In that regard, you've got me beaten through and through…had I been in your situation, I'm honestly not sure I could have withstood it…"

Thoroughly shaken by Vahn's words, Sandora opened her mouth to speak but found herself unable to. She felt compelled to refute him but the words simply wouldn't come out of her mouth. Instead, a sour feeling spread through her nose, moisture glazing her eyes as she shakily complained, "You could have mentioned this earlier…"

Adopting a self-deprecating smile, Vahn softly replied, "As I said before…we all have our faults. I'm not perfect, and, truth be told, I never want to be. Without flaws, we have nothing to improve upon. Without weakness, there is-"

Before Vahn could ramble any further, Ebony kicked him in the foot as Raven threatened, "Just hug her already…"

Shaking his head, Vahn's expression softened in a sincere and affectionate simper as he said, "Case and point…" before gently pulling Sandora towards him. Her body briefly tensed, but, the moment his arms wrapped around her, Sandora quickly returned the favor. What Vahn didn't expect was for her to suddenly whispered, "You're really unfair, you know that? This was supposed to be a political marriage…you weren't supposed to make me fall in love with you…"

As incongruous as it was to hear such a young girl whisper such heartfelt words, Vahn managed to maintain a smile as he held Sandora close and remarked, "Blame yourself…who told you to be such an amazing and hard-working young lady…?"

Trembling in response to Vahn's praise, Sandora put a lot more strength into her arms. A part of her vehemently resisted the idea she deserved praise, yet, hearing Vahn whisper in her ear, she couldn't help wanting more.

Recalling how strangely her brother had behaved, Sandora was genuinely afraid that everything she had experienced throughout the day was all part of some hyper-realistic dream She was afraid that, at any given moment, she would wake up to find herself, once again, alone. Thus, even though she could feel the strength in Vahn's arms and his warmth flowing into her body, Sandora clung to him as if she were afraid he would suddenly disappear.

Now that she had finally found someone who 'needed' her, Sandora wasn't going to let him go no matter what…

Though it was originally supposed to be a relatively small and private affair, the banquet ordered by Sandora quickly turned into an impromptu gala as Mandra assembled more than six hundred of the most senior officials of Salamandra. Kouen City was divided into several districts and had well over ten thousand Communities living within the city limits. If not for ongoing festival preparations, the ongoing disappearance cases, and the unexpected nature of Vahn's visit, Mandra could have easily gathered six thousand, much less six hundred guests.

Among the people that had gathered for the celebration was a middle-aged man with dark skin, rugged features, faded red hair, dark blue eyes, pointed ears, and curved horns that followed the contours of his head before branching out like scythes near the end. He was currently bound to a wheelchair, but, even whilst seated with medical equipment hooked up to his body, he gave off an oppressive and overbearing aura that commanded respect.

Standing behind the man, or, more accurately, pushing his wheelchair was a remarkably beautiful young woman with a shapely figure, maroon-red hair, and matching eyes. Her most notable traits, however, were the curved horns growing from the sides of her head, the diminutive, scale-covered wings protruding from her back, and the inordinately thick tail protruding from beneath her pleated skirt. Her appearance was incredibly eye-catching, but, despite drawing a considerable amount of attention, none were brave enough to strike up a conversation with for fear they might offend the man she was charged with caring for.

None except for Mandra.

Though the young woman offered a polite bow, the man seated in the wheelchair, none other than King Salamandra himself, snorted through his nose before asking, "For what reason have you called me here, Mandra? You said it was a matter of grave importance to all of Salamandra…"

Nodding his head in affirmation, Mandra pulled out a small conch that had the effect of converting all sound beyond a certain point into the distant echo of crashing waves. It wasn't exactly the best tool for preventing eavesdropping but it was suitable considering most people didn't dare listen in on the private conversations of a Floor Master. Salamandra may be deathly ill but he was still one of the most powerful and influential figures in the North.

Shifting his attention from the conch back to his son's face, Salamandra's expression became even more severe as he growled, "You better start explaining, boy…"

Suppressing the frustration he felt whenever his father addressed him as 'boy', Mandra maintained a serious expression of his own as he explained, "The Sage Dragon Emperor, Vahn Aldrnari Mason, has agreed to Sandora's proposal. When I saw her previously, she was already wearing a ring-"

"Do you take me for a fool? I am well aware of the reason for this party. My question was why you asked me, specifically, to be here. Every minute I spend outside the Chamber of Flame, my lifespan shortens that much further. Stop wasting what little time I have left."

Inhaling a deep breath, Mandra did his best to remain calm even as the woman behind his father squinted her eyes and prepared to attack the moment he showed any signs of hostility.

"The healing power of the Sage Dragon Emperor is far beyond what the rumors purport. I believe he may be able to cure your illness…"

Squinting his eyes, Salamandra gripped the armrests of his wheelchair with more than enough force to warp the nearly indestructible material it was comprised of. He was well aware of the kind of man his son was, so, after a moment of seething deliberation, he asked, "Mandra…what sort of game are you playing? Even if your words were true, how do you benefit from my good health? Among all my children, you have always been the one who hated and resented me the most…"

Meeting his father's gaze head-on, Mandra's expression hardened more than usual as he said, "I'm not doing this for you. Now that Sandora has someone like the Sage Dragon Emperor on her side, I no longer have to worry about you laying your hands on her. I just want to make sure you live long enough to see Salamandra restored without your help…"

Though he smiled viciously in response to his son's words, Salamandra wasn't particularly upset by them. If anything, he was glad his son had finally grown a pair.

Ignoring the indignant fury contained in his son's gaze, Salamandra glanced back at the woman standing behind him, saying, "Frey, take this little pup somewhere and confirm whether or not his balls have dropped. The Sage Dragon Emperor has clearly treated him so you'll be his broodmare from today onward. Produce a few healthy whelps and you can consider the debt your family owes paid in full."

Though she tensed in response to her Master's words, Frey ultimately closed her eyes and offered a polite bow before answering, "As Your Majesty commands, it shall be done…"

Opening her eyes and raising her head, Frey was prepared to drag Mandra off somewhere private when the latter stated, "I am more than capable of finding my own partner. However, as you have already offered her to me, Lady Frey is no longer yours to command. As for the debts owed by her family, consider them paid in full. With Sandora at the helm and the Sage Dragon Emperor backing her, the Community you nearly ruined will prosper even without such shady methods…"

Snorting two puffs of flame from his nostrils, Salamandra was seriously tempted to give his son a beating. Contrary to what Mandra seemed to believe, however, he had always cared deeply about the Salamandra Community. Everything he did was to ensure their survival, so, even if every single one of his children hated him, Salamandra didn't care. Sure, one of his daughters had run off as a result of a mistake he made at the absolute lowest point of his life, but, seeing how far Mandra and Sandora had come, Salamandra sincerely believed he had done the right thing. He may have been a sh*tty father and an even worse King but he would willingly accept such labels so long as the legacy he left behind, his children, were able to prosper.