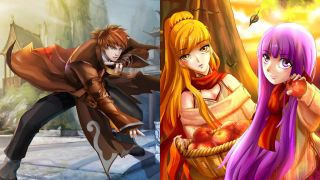 Although they all looked delicate and small, there was a difference between them, even if it was only an inch. The people present were all elites at the Heavenly Sun stage and so they naturally noticed the subtle difference and the huge gap it represented.

Even the smallest Nascent Source of the six was 2.8 inches.

It should be said that no one from the five heavens team had broken past 2 inches except those six people.

The most astonishing thing was that Zhao Mushen's Nascent Source reached 4 inches!

He surpassed everyone else!

But the gap between him and Su Youwei and Wu Yao was very small, which showed how remarkable the three were.

The three were the lowest of the six in terms of seniority, but their achievements greatly surpassed the other three.

Some people realized the three were all from Hunyuan Heaven, which was a direct slap to the other heavens’ face. Why were the young generation of Hunyuan Heaven so terrifying?!

“How come so many monsters are born in Hunyuan Heaven?”

"Yes, it's too terrifying. Not only commander Zhou Yuan is not human, those three are also so powerful and even captain Bai Xiaolu can't compare to them!”

"Hunyuan Heaven has utterly suppressed Qiankun Heaven this time, which means they likely won’t fight for the leader position of all-heavens, at least in this generation.”

The people from the other great heavens whispered, their tone full of envy.

Some people’s eyes widened in shock.

Everyone nodded but they found it hard to believe because they never would have thought the three were from the weakest Cangxuan Heaven.

While countless people were whispering below, Su Youwei and the others slowly opened their eyes.

Then, with another thought, the Genesis Qi storm vanished into thin air.

They could feel they had a much better understanding of Genesis Qi after reaching the Nascent Source stage, and their control of it almost reached a level of perfection.

With that kind of subtle control, the power that one could erupt with would far surpass those at the Heavenly Sun stage even if they had the same Genesis Qi foundation.

The gap between the Nascent Source stage and Heavenly Sun stage was tremendous.

The six people’s gazes met in the void, and each wore a different expression.

The most complicated expression was on Guan Qinglong’s and Bai Xiaolu’s faces.

Guan Qinglong was originally the strongest at the Heavenly Sun stage, but three juniors, Zhao Mushen, Wu Yao and Su Youwei, had overtaken him once he reached the Nascent Source stage.

Bai Xiaolu’s emotions were even more complex. She was the heaven pride from Qiankun Heaven, who everyone had high hopes for, but not only did Zhou Yuan surpass her, even the three also surpassed him.

Why is this Hunyuan Heaven’s generation so blessed?

But Guan Qinglong and Bai Xiaolu didn’t reveal their thoughts and quickly composed their emotions in the end. Since they could reach such a level, they naturally had tenacious minds and wouldn’t feel dispirited because they fell behind a little.

Although the Nascent Source stage was strong, it wasn’t the top.

They didn’t dare to think about the Saint stage, but they felt they could try the Law Domain stage, and if successful, they would truly rise to the top level of all heavens.

They retracted their gazes. When they looked at the Sacred Derivation Boundary again, they even more noticed its power and couldn’t help feeling fortunate. If Zhou Yuan hadn’t seen through the boundary’s flaws and killed Jia Tu, they likely couldn’t escape, let alone reach the Nascent Source stage.

At that moment, there was a clamour of congratulation.

Figures bowed to the six people one after another. Even some who reached the Nascent Source stage nodded slightly and bowed respectfully to them.

This was because they, who reached the Nascent Source stage, even more understood that the six people were far stronger than them.

Wu Yao, Su Youwei and the others bowed their heads in response and then simultaneously cast their gaze to the black hole’s depths.

They could finally see through the black hole after their strength soared.

They saw a figure sitting in the black hole’s depths with ancestral qi gathering endlessly around him and being instantly swallowed by his body.

The efficiency of swallowing ancestral qi made all six people jump up.

Although ancestral qi was good, it contained berserk force and could cause one’s body to burst apart if swallowed in huge amounts.

This was why they didn’t dare to swallow too much, but Zhou Yuan seemed unafraid.

However, they soon realized that Zhou Yuan acted fearlessly because he possessed the Saint Glass Body.

Bai Xiaolu’s huge eyes gleamed covetously. Her physical body had improved tremendously after breakthrough and the glass light halo around her was much stronger than before, which suggested she was close to the real Saint Glass Body. It was only a matter of time before she refined the Saint Glass Body.

But that was in the future. She could only stare enviously at Zhou Yuan’s body now.

“How many inches will that guy’s Nascent Source be when he breakthroughs?” asked Bai Xiaolu curiously.

"Even my Nascent Source is four inches. I’m not surprised if he reaches five inches,” remarked Zhao Mushen indifferently.

Wu Yao and Su You stared intently at the figure in the black hole. Although they didn’t say a word, it was obvious they agreed from their expressions.

While they were discussing, the black hole rippled and the figure opened his eyes. Vast ancestral qi mightily swept across the air following a long, deafening roar. Then, the figure swallowed the ancestral qi in one mouthful.

A terrifying wave of Genesis Qi erupted, causing the world to change.

Bai Xiaolu, Su Youwei, Wu Yao and the others, as well as everyone below cast curious gazes towards Zhou Yuan.

They knew it was a sign that Zhou Yuan was about to break through.

They just didn’t know what size of Nascent Source would be born from such tremendous movements.