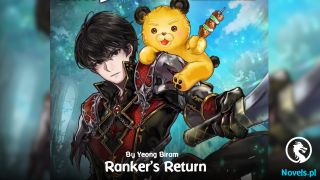 It didn’t take long for a wave of awe-inspiring spiritual pressure to spread from the girl puppet to the surroundings, causing ripples in the surrounding space.

The girl’s puppet’s petite body began to metamorph in the dazzling golden light. The hands, feet, body, and head grew larger in an instant. In the blink of an eye, she became a 199 meters tall giant puppet that emitted a golden radiance.

Liu Ming’s face turned pale facing the surging spiritual pressure. He staggered back in the air, then a great pressure pressed on his shoulders, making his bones creak. He knelt down directly.

But the next moment, he let out a muffled groan, but he stood up again relying on his strong body. However, this almost made him vomited blood.

A soft golden light fell from above, covering his body.

Liu Ming moved his arms, raised his head in exhilaration, and bowed to the giant golden Puppet in front.

“I punish and reward fairly. That spiritual puppet betrayed me, I have to get rid of it of course. You helped me, I of course won’t forget about your merit. Also, my name is Qing Ling. Remember that.” After the Southern Puppet Emperor turned into a golden giant, her voice seemed to have matured a lot, but it was still a woman’s voice.

After the golden giant finished speaking, with a wave of its arms, a thunderous sound came from the ruins below.

The earth began to shake violently!

After a while, Liu Ming was surprised to find that the originally hard and rough black sand under his feet had gradually become soft, and the black sand had slowly turned into black soil.

Then, dense giant trees and vines emerged from the black soil like bamboo shoots growing after rain; the growth speed was magnificent. In the blink of an eye, the entire ruins were surrounded by a dense and prosperous forest.

This was not over yet. The endless black desert outside the ruins also had countless green trees and various kinds of plants popping out, spreading out toward the distance.

At the same time, after a burst of rumbling noise, the ground sank and water flowed out, turning into rivers that circulated in the forest.

Liu Ming stared at the world-shaking changes in front of him with a stunned look. The awe in his heart lingered for a long time.

It was not difficult to grow a forest in a barren land, a Crystallization Period cultivator like him could do it with a little effort.

However, what Southern Puppet Emperor did was significantly different.

Not only did she instantly turn the entire barren and desolate Odd Desert into a vibrant, lush paradise, but the spirit in the air also quickly filled up.

Obviously, only a powerful person who had reached the realm of Mystic Comprehending State could realize this kind of great power that could create a new world.

At this moment, the giant golden puppet stopped its hands, looked around and nodded in satisfaction, then it suddenly grabbed in a certain direction.

There was a sudden wave of fluctuations in that space!

The next moment, a few acres of yellow clouds flashed and quickly landed on the open space not far in front. As soon as the yellow light faded, those Sand Clan people who were supposed to stay in Shaman City appeared here out of thin air; the Sand Clan great elder was among them.

These Sand Clan people obviously didn’t know what happened. At this moment, except for the elders of the clan, who were slightly calm, most of the others were a little panicked.

“Where is this place!”

“This …This is the Holy Land!” Finally, someone finally recognized the place and said, causing a commotion among the Sand Clan people. Some even knelt down and kept praying.

After that, they quickly noticed the changes in the surrounding ruins and the huge golden puppets in the sky, and they were dumbfounded.

At this time, Elder Sand Clan and the other elders looked at each other.

At the same time, Liu Ming’s pupils contracted. A golden light flashed behind the crowd, and a familiar and graceful figure came into his vision. It was Sha Chuer who came here with him.

Although this woman was not as panicked as the other Sand Clan people, her face was also full of incredible expression, she was pushing away the crowd and walking in the direction of the great elder.

“Chuer, what happened here in the Holy Land?” Sand Clan great elder saw Sha Chuer coming, looked back at the giant golden puppet and asked in a deep voice.

She was obviously confused after being knocked out by a puppet.

“You descendants of the Sand Clan have been guarding this place for generations over the years, which is considered loyal to me.” At this moment, the giant golden puppet looked down at the Sand Clan people as a woman’s sound came from it.

The sound was not loud, but it reached the ears of everyone present clearly. It had a hint of indescribable majesty.

“Senior is…” Elder Sand Clan was startled when he heard the words. He asked while cupping his fist.

“I’m Qing Ling, that is, the Southern Puppet Emperor that your ancestors served.” Qing Ling said faintly; her tone was full of indisputable momentum.

“Southern Puppet Emperor?” The Sand Clan people all looked at each other at a loss, not knowing whether they should believe in the words of the giant puppet.

But if they didn’t obey, with its overpowered strength, it could easily kill them all.

Sand Clan great elder looked uncertain for a while, seeming to be hesitating.

Just as the other Sand Clan people were in doubt, there was a faint sound of rumbling footsteps around; the footsteps were more and more louder as they approached!

At a glance, Liu Ming suddenly noticed that many large and small figures appeared in the surrounding woods. They were approaching where everyone was. Not long after, their figures were revealed from the forest.

They were the puppets that originally guarded the forbidden area; there were the human-shaped, beast-shaped, even the giant bronze puppet that the great elder used, etc. The number was endless. The Sand Clan people were all surrounded by them.

“Oh no, it’s the puppets guarding the forbidden area!”

“We are surrounded. This is going to be troublesome!”

“Elder, what should we do?”

The Sand Clan people were obviously very familiar with these puppets guarding the forbidden area and their power. Now facing so many puppets at once, they panicked once again. Many people had subconsciously channeled spiritual power and hurriedly condense black sand blade, making an alert posture.

Seeing this, Liu Ming glanced at the giant golden puppet in the sky with a thoughtful look.

At this moment, the situation changed dramatically again.

These thousands of puppets of different shapes suddenly stopped at the same time, and they crouched on the ground motionlessly.

These puppets were praying at the giant golden puppets in the sky.

Only then did Elder Sand Clan understand something, he knelt to the ground at the giant golden puppet in the sky, and said “The Great Emperor” nonstop.

When other Sand Clan people saw this, they followed suit and knelt down to pray.

Seeing this, the giant golden puppet’s eyes flashed, wanting to say something, but then it turned to look at a certain direction and let out a surprise eh,

“Eh, I almost forgot that I still have to deal with these 2 guys.”

As soon as she spoke, she waved in the air with one arm. A faint golden light curtain of 100 meters emerged out of thin air. The image on it was flashing nonstop. A beastkin muscular man in a purple robe and a thin beastkin man in a green robe were trapped in a huge sandstorm.

It was Wind Beastkin and Thunder Beastkin!

At this moment, they looked very unsightly. They were using different skills to resist or evade the sandstorm.

“By the way, do you know who they are?” Qing Ling looked down at Liu Ming as she seemed to notice it, and she asked faintly.

Although he had vaguely guessed the identity of the beastkin cultivator in a green robe through the violent winds he launched, he didn’t want to make a random guess in front of a Mystic Comprehending State powerhouse.

“Oh, great. I currently lack people that I can use. These 2 people really come at the right time.”

After speaking, she opened her mouth, and the pale golden light curtain turned into golden light spots and dissipated, she grabbed in the air with both arms.

There was a muffled sound in the space not far away. 2 huge cracks appeared out of thin air. The giant’s arms enlarged amidst a golden light, and the arms extended into the cracks.