After seeing the ‘orz’ posture of the high-quality puppet, Song Shuhang remembered the secret book of the [All the Monsters of the World Should Unite and Become a Family] monster organization—to be more accurate, the [Fiercely Kneeling on the Ground and Surrendering Technique] from the [500 Ways to Surrender to a Human Cultivator You’re Unable to Defeat] included in the [200 Must-have Skills for a Monster Spirit to Survive].

With the corner of his mouth slightly twitching, Song Shuhang raised his head and looked up towards the slowly forming ‘nuclear silo’, growing more and more restless.

He couldn’t help but recall the nuclear incident related to Senior Xian Gong.

Back then, ordinary people decided to test a nuclear bomb that had the power equivalent to 20,000-30,000 tons of TNT. Such a warhead had almost resulted in the death of Scholar Xian Gong, who was at the peak of the Sixth Stage, and had even set up hundreds of layers of barriers.

However, the shape of the ‘nuclear silo’ condensing amidst the heavenly tribulation sea before his eyes seemed extremely advanced, so its TNT equivalent would definitely far exceed 30,000 tons. Even if it were to reach 200,000 tons, it wouldn’t be strange. Furthermore, the nuclear silo was born from the heavenly tribulation, making it a combination of cultivation and science. Such a combination could only result in its power being way stronger and way more terrifying than nuclear weapons manufactured by ordinary people.

The heavenly tribulation learning how to make use of the power of science was even worse than tugs learning martial arts skills.

The power of the ‘guided missiles’ in the second wave of the heavenly tribulation had already reached the Seventh+ Stage, and the power of this ‘nuclear weapon’ in the third wave was very likely already at the Eighth+ Stage level.

Would the high-quality puppet be able to hold up? Song Shuhang was worried.

Can’t it take advantage of the fact that the nuclear silo has yet to take shape and attack it?

Song Shuhang estimated the distance between the ‘nuclear silo’ and himself, and then dismissed the thought. He was only a little over two kilometers away from it, so if they were to hit the nuclear silo in advance, it would only end with him dying earlier.

So, should he just quietly wait for the ‘nuclear bomb’ to descend?

Song Shuhang felt a sense of hopelessness in his heart--this kind of situation where one knew that the other party was going to beat them up, yet couldn’t do anything besides waiting to get beaten up simply made him feel disheartened.

Just as Song Shuhang was thinking this, the ‘nuclear silo’ that was in the process of forming two kilometers away from him suddenly froze.

The heavenly tribulation froze for more than 10 seconds—it was as if time had stopped.

Song Shuhang opened his eyes. Was it possible that the heavenly tribulation didn’t have enough energy to form a complete ‘nuclear bomb’?

The ‘nuclear silo’ in the distance let out a jarring hum.

Then, strands of awe-inspiring energy appeared in midair, turning into supreme runes that got branded onto the nuclear missile. Each rune poured the power of the heavenly tribulation into the missile.

The nuclear silo was already so abnormal, and these ‘supreme’ runes had actually come now, upgrading it? Wasn’t this overkill?

Song Shuhang said, “Damn it, why is this heavenly tribulation upgrading?”

Puppets, to an extent, could be regarded as ‘magical treasures’ that were part of a cultivator’s strength. There should have been no problem with taking out a puppet during the heavenly tribulation, at the condition that the puppet was one’s own.

Puppets were like magical treasures—it would take a lot of time for a cultivator to refine one. After that, they had to leave their brand on it to completely make it their own.

However, the ‘high-quality puppet’ that Song Shuhang was using was a tailor-made puppet that the ancient Jet-Black Sect had manufactured for one of their VIP clients, and not for Song Shuhang. Its core had been pulled out from the Jet-Black Sect’s ancestral puppet, which had no connection to Song Shuhang.

The power of the heavenly tribulation increased. It jumped from early Eighth Stage rank to peak Eight Stage rank. It was now infinitely close to the Ninth Stage.

At that time, not even the high-quality puppet of the Eight Stage would be able to handle it.

The strength of the high-quality puppet was around mid-level Eighth Stage at most. In addition, its ‘pseudo eternal furnace core’ wasn’t originally part of it, so the strength that it could bring out was really only around early Eighth Stage rank.

Unexpectedly, the heavenly tribulation was so meticulous with its terms of service, not giving cultivators any chance to cheat their way through them.

Shuhang’s liver was in pain, and he felt as though there was a knife being twisted in his heart.

I thought that the Eighth Stage puppet would give me a chance to live through the tribulation, but I didn’t expect the heavenly tribulation to directly flip the table…

Song Shuhang couldn’t really blame the puppet either, for without its help, the ‘guided missiles’ of the second wave would have blown him to bits.

In the front, the high-quality puppet in the ‘orz’ position tilted its head after hearing Song Shuhang’s words. Then, it turned its head around, and continued to maintain the cowardly position.

Ten seconds later, the shape of the nuclear silo changed again as those ‘supreme’ runes were engraved onto it one after another.

The nuclear silo was then engulfed in a type of illusory radiance, and its size quickly reduced. The fluctuations of energy emitted from it also got stronger and stronger.

From the looks of it, it was upgrading from a nuclear weapon to something way scarier.

What monstrosity was the nuclear silo going to turn into? Would the nuclear bomb evolve into a hydrogen bomb? Or was it going to transform into something even more terrifying?

Each strike of the God Slaying Cannon would consume spirit stones of the Eighth+ Stage rank. Luckily, Song Shuhang had borrowed a ton of spirit stones from Senior White. Otherwise, he might have been unable to keep up with the consumption.

The virtuous lamia put the cannon on her shoulder and fired at the ‘nuclear silo’.

He might as well let her go ahead and try. Who knew, perhaps things might turn for the better for him…

The God Slaying Cannon opened fire. The cannon light condensed into a beam and dashed forward, seemingly planning to annihilate everything in its path.

In the next moment, the beam of the God Slaying Cannon bumped into that illusory light covering the nuclear silo.

After that, the beam of the God Slaying Cannon disappeared…

It simply vanished, just as though it had never existed in the first place.

That thing surely had a good defense.

Then, something that resembled a futuristic fighter plane rose from the original ‘nuclear silo’, whizzing toward Song Shuhang.

Afterward, the fighter plane threw at him what seemed to be a ‘hydrogen bomb’.

That hydrogen bomb the heavenly tribulation had condensed detonated in midair, and a dazzling sun appeared above Song Shuhang’s head.

A thunderous explosion followed, and the classic mushroom cloud was also there…

Song Shuhang, who was in the center of the explosion, faced a temperature of several million degrees Celsius.

Now, everything was in the hands of that high-quality puppet. If the puppet failed to resist the attack, Song Shuhang and the others would very likely evaporate… If they were lucky, some small traces of their existence might stay behind.

The ‘pseudo-eternal furnace core’ in its body went into overdrive, and it could explode at any time.

The high-quality puppet was giving it its all.

But under the power of this hydrogen bomb, whose strength infinitely approached that of the Ninth Stage, that layer of light didn’t last long…

Due to the pseudo-eternal furnace core inside its body having gone into overdrive, the puppet forcefully entered into ‘limited power supply’ mode after ten breaths. The power of its defensive barrier was immediately reduced by more than half, and its body started to crumble. Its back and the puppet parts inside its body were annihilated amidst the explosion.

However, even though its body was crumbling, it still maintained its original posture, not moving in the slightest. The power of the defensive barrier around its body had started to weaken, but the barriers protecting Song Shuhang and the three cultivators behind him were still intact.

Song Shuhang raised his head and looked toward the still expanding mushroom cloud in the sky. A heavenly tribulation that combined cultivation and science… Even the duration of its explosions was unscientific.

It almost felt as though the explosion was going to last forever.

His Inner World was still unavailable…

In the end, would he have to rely on that ‘life talisman’ to survive?

At this time, that high-quality puppet had directly fallen to the ground—it couldn’t even maintain the ‘orz’ posture. It tilted its head, and the orange eye behind the mask gazed at Song Shuhang’s bald head without blinking.

The layer of light on its body had already disappeared, but it still tried its best to maintain the barrier around Song Shuhang and the other three.

Song Shuhang didn’t have the heart to look at the crumbling puppet.

If only he had the power of a Ninth Stage Tribulation Transcender, he could have probably destroyed that hydrogen bomb with just one attack, but there were no ifs or buts in this world…

Nonetheless, he was still unwilling to accept his fate.

Song Shuhang closed his eyes. Since he was going to die, he might as well experience how it felt to die in the explosion of a hydrogen bomb. If he was lucky enough to come back to life, this experience would be invaluable.

[Hello, are you Fellow Daoist Song? Can you hear my voice? The signal at your current location isn’t too good. Are you exploring some secret realm?] A towering voice suddenly echoed in Song Shuhang’s ears.

[Right, let me introduce myself first. My name is… hmm, forget it. Just like Seventh Cultivator of True Virtue, you can call me ‘Almighty Merchant’. I don’t want to brag, but as long as there is a treasure in this world—and you can pay the right price for it—I can get it and sell it to you. Thereupon, do you wish to buy something?] 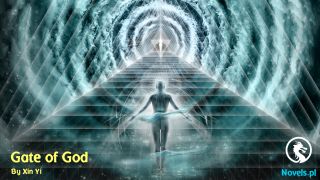