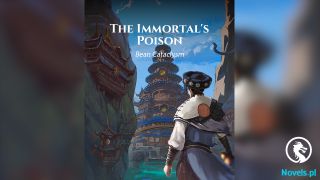 Bodhi's astralforce surged through his entire physically enhanced specter body. There was also a unique power that only constelliers had that suppressed Tianming, his four beasts, and all ten of his godswords. Though specters only had one fighting unit, being without totems or beasts, they were not to be underestimated. Their entire power was concentrated in that sole body instead.

"Constellation stage!" Tianming watched as a phenomenon occurred around Bodhi. There was a field formed of astralforce that caused countless beams of astral light to manifest. The stars gathered together and formed a nebula that looked like a snow-white direwolf. It continued growing in size until it covered Tianming.

Before his opponent had even struck, Tianming felt searing pain all over his body. The nebula was a 'constellation', something only constelliers could use! Bodhi's constellation was a skywolf; within the range of the field, he could gather stellunar force to form a huge reservoir from which he could draw power.

Different constellations had different effects. For instance, the skywolf constellation emphasized chaos and could absorb, and even twist Tianming's astralforce. It was somewhat similar to a unity field, but it was a completely different concept. Unity fields were the result of sharing energy between beastmaster and the beast, while constellations were only related to the projection and release of astralforce. Depending on the type of cultivation, lifebound beast, and bloodline, constellations could manifest as different fields around the battlefield. In another sense, it was like having a portable formation.

Specters, totem users, and beastmasters had different constellation qualities. For instance, totem users' constellations emphasized the intercommunication between the user and their totems and had to be executed by both totem and user to mutually strengthen one another. Sovereign Xi had her own constellation, but all of her totems had been destroyed by Tianming before she could manifest and use it.

Bodhi's skywolf constellation caused the fundamental cosmic forces in the area to gather around him, making him grow even brighter and more threatening. While Tianming didn't have a constellation of his own, he did have the Imperealm Sword Formation and could achieve a similar effect. It was too bad he didn't have access to an external source of energy, like a constellation.

As Bodhi manifested the skywolf constellation, Tianming and his beasts charged toward him. Within the nebula, Bodhi savagely fought with his empty fist and Moonsoul Dream. With both sides having a grade-four divine artifact, Tianming's boost from the orderian cauldron seemed even less worth mentioning. With his level being at Heptaglory Sky, he was confident in being able to face off against someone at the Orderian Sky level. However, the enraged Bodhi was far harder to deal with. The gap between the Ascension and Constellation stages was too wide!

Bodhi only needed a single strike to land through Tianming's flurry of attacks. Infused with constellation power, his strike was boundless in power. Before it even connected, Tianming could already feel the constellation power working against him. Even with the Purple Tower boosting his defense, he was already starting to bleed all over. Additionally, the skywolf constellation continued spinning like a vortex, siphoning away Tianming's astralforce and further weakening him. This strike alone had completely mitigated the force of Tianming's preemptive defense and the Imperealm Sword Formation, sending him slamming into the wall of the cauldron.

"I've never been afraid of you. What about Jiang Feiling? Is she able to come out?" Bodhi coldly asked, his robes fluttering from the powerful force of his constellation. As he attacked, he evaded Meow Meow's abilities with blinding speed and struck once more, shattering Ying Huo's Death Inferno. Then he slammed his fist at Lan Huang, sending it flying. He was a complete monster.

"Looks like she isn't able to come out after all. That’s too bad, you're going to suffer a horrible death." He didn't hold back at all, putting his power advantage on full display. His ultimate speed and vitality allowed him to match Tianming and his beasts' tricks without a single mistake. He seemed like a fighting machine capable of everything, despite being on his own.

Tianming wiped the blood from the corner of his mouth and endured the shock his organs had received before charging in again. He gathered his godswords by his side once more and pointed them all at Bodhi. It was one thing to deal with such a fearsome foe, but another to do so within a short timeframe. Each breath he took meant that the moon was growing even closer to the continent.

The Archaionfiend couldn't do anything about the descent at all without the Moondream Soul. Tianming glared at his foe and pushed his astralforce to the limits as he executed the Moonnight Subdued Strike, but Bodhi didn't care about his totems or the Grand-Orient Swords at all. A soon-to-be-dead-man's talent was nothing to marvel at. The moonlight that was unleashed from the swords and totems illuminated the entire cauldron as countless moons slammed toward Bodhi.

"You have all the best lifebound beasts, weapons, battle arts, and totems. It's too bad you're too young."

Based on his age alone, he was bound to never catch up with Bodhi. Bodhi didn't budge the slightest bit from the attacks. Instead, he used the energy from the skywolf constellation to execute the Spectral Voidflower. The move caused countless deathly flowers to manifest, each one formed of countless swords. The force from the move instantly swallowed up the Moonnight Subdued Strike.

Then he struck with his empty fist, using his strongest move, Boundless Dragonform Divinity. The punch caused thousands of dragons to ferociously descend toward Ying Huo and Lan Huang. The first wave neutralized Lan Huang's Daybreak Worldslash, while the second wave swallowed up Ying Huo's Death Inferno again. Even though the move didn't harm Lan Huang, the dragon was sent smashing into the cauldron's walls. At the same time, Bodhi used an ability.

"Goldwheel Spectral Gate, open!" Gold words emerged from his mouth and rushed to his head, forming a golden disc a hundred meters in diameter that opened up like a huge gate. The gate sucked in Meow Meow's Cosmic Lances and other abilities, as well as Xian Xian's Bloodrain Swords.

Bodhi had no problem facing off against multiple enemies at all.