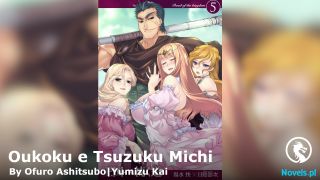 "Childish!" Another voice came from another side. Herman and The Blue Vest's

Guild Leader looked toward the voice. Another big group came to the entrance;

they were the Amazon Guild. "Can you be a little mature? Does it matter who

will enter it rst?" The man in the middle questioned The Blue Vest's vice guild

eyes. He walked toward Donald Callahan, "Can you be responsible for what you

said just now? Do you think we will quit the alliance if not, you greedy bastards

try to control the Amazon Guild just because we lost the previous leader?"

perspective. The man was over two meters tall with short hair, but his sharp

"Just ignore that coward, Boss. That guy is bold and courageous just because he

has the numbers, but I bet if it's The Emperor, he will cower behind his guild

leader or maybe wet himself," The woman with long black wavy hair spoke. She

was the new Amazon Vice Guild Leader, Alexandra. People might think she got

the position because she had the look and gure, but in fact, she was an Epic

was her full name, and she was renowned for being one of the top ten hottest

models in the world. People might think she seduced the current leader to get

into the current position, but in fact, she was the second strongest after Ninho

thanks to her, the Amazon Guild managed to gather a lot of new recruits in

"Shut the f*ck up, B*tch!" Donald Callahan pointed his index nger at

Alexandra and swore. Alexandra showed no reaction to the swear, but the

Amazon Guild's members had the opposite direction. They drew out their

Guild Leader. However, ghting between the factions inside the city was just

[You are in the safe zone! Fighting is not allowed in the city, and the violators

will be expelled from the city and banned from entering the city for a month!]

raised her right hand and motioned to her subordinate to lower their weapon,

"Chill out, guys. We can't do anything to them here because the System

protects them, but we can do anything to them inside the tower."

"Do you hear it, Boss? We can't ght inside the city, so these people can't stop

us from entering the tower. Just ignore them," Alexandra walked ahead of her

guild leader. When she passed Scot Moran, the Blue Vest's Guild Leader, she

smiled, "You shall consider changing your vice guild leader because he may

lead The Blue Vest Guild to its ruin."

Guild; no one stopped them from entering the tower after a little friction.

nodded and led his people to the tower. Since the System prohibited the players

from ghting with each other in the city, they could not stop the others from

entering the tower. However, Herman realized something that imprinted on

many people, including himself, The Emperor.

That was the Tang Empire Leader's nickname, the code name used to address

the strongest individual on Earth. When Alexandra brought that name, the

when the man addressed himself as an Emperor before the Earth Tournament,

but no one would dare to joke around about it now. No one dared to take the

consequence of oending The Emperor.

Herman Bonivido shook his head and tapped his cheek two times, 'No, let's

focus on the tower expedition. Let's think about the Tang Empire later.'

the Tang Empire and the Amazon Guild. Yes, while the Uprising Guild came

earlier than the other factions, they had not entered the tower yet.

The Tang Empire's main force settled in Miragul's settlement. After having a

further conversation with the surviving Miragul, the reason there was nothing

in this area was because of them. No beast and monsters dared to enter this

area because this was Miragul's territory, and the beasts that tried to occupy

this area had been killed by Miragul. As for the settlement, it was used to trap

the human traveler, so that was why the house was empty.

"Based on what Miragul told us, the Drakengard lives in that direction, around

a week of traveling to reach its region, but we can't trust them completely. So

we will stay in this place for a few days and investigate the rst oor, especially

the southern region where the rumored Drakengard lives," Zhang Mengyao

held a brief meeting with the others. "I know we should be able to trust them

after the oath ceremony, but we don't know what they haven't told us yet."

"I will go to the south, General Zhang Mengyao," Lu An was the rst one to

speak after Zhang Mengyao. "With my speed, I can cut seven days of traveling

to four or maybe three days."

Zhang Mengyao looked at Lu An for a moment. She did not want to send him to

the dangerous place alone; no, in fact, she wanted to decline the idea of Lu An

King of the rst oor was. She knew Lu An well; he would ght the boss alone

without asking for reinforcement if he managed to nd Drakengard rst.

"I will allow you to go there, but not alone. At least, bring another three to ve

people with you," Zhang Mengyao stated the condition. She could tell that Lu

An did not like the notion of bringing other people with him, but she insisted

since she did not want anything to happen to him. This young man was too

"I think I know someone who can go with Sir Lu An," Moonsong was also

concerned with Lu An's well-being, but he could not leave his post to

accompany Lu An since he was the head of The Luminous Legion. "Revalor

alone should be enough, and he can follow Sir Lu An's speed as well. And then,

Revalor's scouting ability is the best of the best, so he can easily nd this

"Good. You must bring Revalor if you want to go to the south; this is an order,"

Zhang Mengyao did not want rejection from Lu An. This was not just a normal

exploration like on Earth. They knew nothing of this place, so she would use his

authority to force Lu An to listen to her.

"Alright. I will bring one Miragul, Yeon Hee, and Revalor with me. I need that

demon to be our guide," Lu An nodded his head as he left them to get prepared.

The meeting continued without Lu An, dividing the task into what they should

do for the investigation.

Lu An, Yeon Hee, Revalor, and Yeon Hee left the settlement right away as they

did not have much to prepare. However, there was additional personnel within

the group, Helia, the Chief of the Light Bombyx Mori Tribe. She was one of the

best healers within the Healer Division, so Kang Xue insisted that Lu An bring

her with them. The elemental beast had a high speed, too, so she did not have

an issue following Lu An. No matter how strong Lu An and Revalor were, Kang

"I don't like this," Lu An muttered in a low voice. He did not like bringing too

many people because that would make him constantly worried about them.

Because of that, he would not be able to move freely as he always had this

"Then you should leave me behind instead," Yeon Hee replied. She was

confused why Lu An insisted on bringing her with him.

afterward, telling her that he was watching her. Yeon Hee immediately realized

why he had brought her with him. She was still under his watch; that was why

he brought her. That left her speechless because she was in the same situation

as them, and the only chance for her to get out of the tower was with the Tang

Empire. She would not do something stupid because of that.

Lu An shrugged as they continued the trip to the south. In the rst three hours

of the fast run to the south, they encountered nothing. The forest seemed to be

dreaded by the other creatures. Then the group came out of the forest and

arrived in the open area, in the green eld, with a refreshing breeze hitting

Lu An felt like he had arrived at the edge of the football eld, albeit this place

was much, much bigger than the football eld.

"This giant eld is Minke Tribe's territory. They are ferocious beastmen that

regard all living things as prey," Miragul explained to Lu An once they stepped

into the grass eld.

"We should avoid them because our mission is to investigate Drakengard. Let

the others take care of this Minke Tribe," Lu An made the decision for the

While they expected to encounter the beastmen from the Minke Tribe, they

encountered another interesting group instead. Lu An and his group stopped

their journey temporarily because a big group of humans blocked their path.