Support
Random Novel
The Emperor Wants To Marry The D 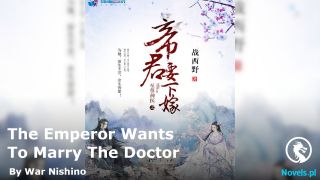 After handing the report to Yeon Hee, Lu An observed the woman's expression.

She clearly did not expect her friends would be here, the enemy's territory,

after she sacriced herself for them. The shock and worries were apparent on

Then he received a message notication. He opened the notication, and it was

a message from Sister Mengyao. He read the message and was surprised by the

content as Zhang Mengyao asked him to bring Yeon to the main building. Lu An

did not hide the message from Yeon Hee as he shared it with her, "It seems you

will meet your friends, Yeon Hee."

Yeon Hee read the message. Instead of being happy as he was able to meet with

her friends, she was more concerned. It was uncertain what the woman called

Zhang Mengyao wanted to do to her and her friends, "Do you want to meet

them?" Lu An asked Yeon, and he added at the end of his words, "This may be

your last chance to meet them in your life."

happen to her friends if she met them. This might be a test for her, and if she

chose to meet her friends, the Tang Empire would kill all her friends. She would

rather not meet with her friends at that cost.

"Oh, unfortunately, you can't decline this," Lu An shared the second message

of fear. Of course, there was no threat in the message as it only said meeting her

friends was not an option but an order. It meant she had to meet her friends.

"I have been in this room for too long, so might as well get some fresh air," Lu

An stood up from the chair and walked to the exit, "Follow me, but you must

remember the deal between you and Your Majesty Emperor. The reason your

friends are still alive is that we honor the agreement. If you break the

agreement, then only one fate awaits your friends."

Yeon Hee's body inched slightly when she heard the last part. Deep inside, she

wanted to run away from this place. There was nothing that bound her to this

place, no system contract or anything. With her ability, she could escape easily,

at least, that was what was in her mind. However, she did not dare to take the

Earlier in the waiting room

"Can you explain in detail the meaning of this, Chief Park Nam Hoon?" Zhang

Zhang Mengyao's expression, he immediately regretted his decision to bring

The Haven to the main base, 'I should have asked rst before bringing them

here.' But the ice had melted; he could not escape from this, but he was

thinking for the right excuse to come out from the current predicament. This

was obviously a minus point for the Korea Sub Region.

"I apologize for my impertinence, Supreme General Zhang. I should have asked

your permission before bringing them with me," Park Nam Hoon braced

himself to apologize and bowed his head. Yoo Kwang Sung and Song Shi Eun

also bowed their heads, "I am doing this to repay their kindness for helping the

Legion Guild in the early days. I hope for your generosity for my impudence,

However, Zhang Mengyao said nothing, which made him nervous, but he still

continued, "I bring them here to talk with Your Majesty, that's it. They just

that can kill Your Majesty Tang Shaoyang? Will The Legion Guild take the

at The Haven's leader, Min Soo when he was about to interrupt her. Min Soo

The Haven last night, and yet you still bring them to the main base. Are you a

what to say. He did not think that far because of the show of The Emperor's

power last night. He thought there was no way the Haven could assassinate The

Emperor. But he now thought about it. There were a lot of unknown things he

did not know, and maybe The Haven had something that could kill The

Emperor. He did not think that far before.

"I will overlook your mistake just this once, the rst and the last time. If the

same thing happened, then…" Zhang Mengyao did not nish her words, but

If they lost the Tang Empire's support, they should consider disbanding the

guild. Even if the Tang Empire did not destroy them by cutting ties, the World

The three people stood and bowed their heads to Zhang Mengyao, "We are

grateful for Supreme General generosity." After that, Park Nam Hoon raised his

and turned toward Min Soo and the Haven's members, "Shall I escort them out,

"There's no need. Since they are here, I will have a chat with them," Zhang

Mengyao shook her head, "Just sit there!" The three did not know why Zhang

Mengyao wanted them to stay, but they followed the order without questioning

"I have a gist of what you want to talk about with The Emperor, but he is not

someone you can meet just because you want to meet him," Zhang Mengyao

turned toward Min Soo, "But I will listen to you. You have ve minutes to

"We will do everything for the Tang Empire, but in exchange, we want The

Tang Empire to return Yeon Hee to us," Min Soo did not hesitate to speak what

was in his mind. "As for Dae-Jung who has oended The Emperor, I have killed

him with my own hand."

"Can you prove it? I want proof that the man called Dae-Jung is dead," Zhang

"You can't convince me with a lie," Zhang Mengyao shook her head, "Also,

what can you do for the Tang Empire? Do you think we lack manpower? Call

"Do you need something from us, Supreme General Zhang?" The Moonlight

"I am sorry to bother you two, but can you direct your aura to these people?"

Zhang Mengyao pointed at Min Soo and his friends. Moonsong and Revalor did

members. Out of eleven people, eight of them fell o the chair as horror and

dread plastered on their faces. "Thank you for your assistance. You can leave

showed The Haven the reality, "Do you think you have enough power to make

the exchange? While the Epic Rank is amazing for the small faction, you guys

are nothing in The Tang Empire's eyes. We have a lot of people stronger than

The Haven; why would we want you?"

The deep silence followed, but Min Soo still gritted his teeth as he did not want

to go back empty-handed. This was his only chance to get Yeon Hee back

because he would not be able to visit this place again if he left now.

"It seems that's not enough to convince you," Zhang Mengyao shook her head

once more, "Well, in fact, Yeon Hee can leave this place anytime if she wants to.

We did not force her to sign the System Contract or take the Oath Ceremony.

There's nothing that binds her with Your Majesty or The Emperor."

"LIE!" Min Soo immediately refuted as he did not believe it. He believed the

Tang Empire must force her to sign the System Contract, or else she would

escape already if there was nothing binding her. He knew her ability and class;

it should be easy for her to escape from this place. The fact that she did not run

away, there must be something that bound her, "You can't convince me with a

Zhang Mengyao shrugged, "You will know directly from the person herself. She

should be here soon. As long as you can convince her to leave with you, then we

will not stop to bring her away." She had just nished her words, and the door

opened. Lu An and Yeon Hee entered the waiting room.

room. He was about to rush toward her, but suddenly a young man appeared

right before him. He subconsciously raised his hands and was about to push the

young man away, but his hands were pushing the empty air. He turned his

head, and the young man was already sitting next to Zhang Mengyao.

Min Soo shook his head as his mind was on Yeon Hee right now, "Let's leave,

Yeon Hee. Let's leave this place with us." He walked toward his girlfriend and

smiled. When he was about to hug her, Yeon Hee surprisingly pushed him away.

"No, I will stay here. You and them should leave this place. Don't bother me

anymore because I have chosen to stay with the Tang Empire."