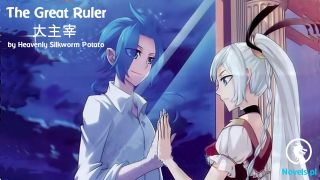 The space around Yi Shuihan cracked and warped, and then a powerful wave of force swept down upon the Primal True Dragon like a surging tide!

There was a wisp of sorrow in the Primal True Dragon's eyes as it gazed at the approaching attack.

It turned to glance at Snowy and Erya, and then it closed its eyes slowly.

As far as Oxxy and the Primal True Dragon were concerned, Snowy was the Sprite Progenitor, but a friend too. Especially the Primal Treu Dragon. It had taken Snowy to be its friend since the moment Snowy had given that piece of fruit to it.

Sometimes, friendship was just that simple.

Snowy shook Erya's arm with all her might with the hopes that Erya would save the Primal True Dragon.

Erya stared at the sky. She wanted to save the dragon, but the old man was still targeting her and Snowy!

So long as she took action, Snowy would be finished.

However, she really wanted to go save the dragon! Because if she didn't, the stupid dragon would die. But if she saved the dragon, Snowy may be captured.

Erya closed her eyes slowly. Grandpa, what should I do?

Suddenly, a sword howl resounded from deep underground, and then a ray of light tore through the ground and shot up into the air.

Erya opened her eyes and looked over. She wasn't the only one, everyone here looked toward the sword howl.

A young man had shot up into the clouds, and he was very swift. It took him just an instant to appear before the Primal True Dragon.

Two rays of light intersected in the sky, and then Yi Shuihan's attack was minced into bits.

In the sky, Yi Shuihan's eyes narrowed slightly, “Not bad, you're much stronger. This makes things more interesting!”

Yang Ye glanced at her, “Give me some time. That isn't a problem, right?”

She grinned, “Sure. Now that you've shown yourself, I'm certain that woman will too.”

Obviously, she was speaking about Tian Xiu.

Being humiliated by Tian Xiu that day had become a knot in her heart, and if she couldn't undo it, she would never be able to advance further.

So, she wasn't here for Snowy today, she was here for Yang Ye and Tian Xiu!

Yang Ye turned around and gazed at the Primal True Dragon, and his heart hurt.

The Primal True Dragon's body had been completely distorted. Its scales were utterly damaged, and its head had even cracked open. Its injuries were too, too severe.

It could be described as being just a step away from death.

Yang Ye walked over to it, touched its horn gently, and spoke softly, “Thank you!”

Meanwhile, Snowy appeared beside Yang Ye. She hugged Yang Ye and cried for a while, and then she rubbed the Primal True Dragon's horn gently.

Yang Ye waved his right hand and sent the Primal True Dragon into the Primordial Pagoda.

Once he did that, Yang Ye went underground. Oxxy was lying motionlessly there.

If the Primal True Dragon was said to be hanging on to one final breath, then Oxxy didn't even have half a breath left.

Oxxy's body was much more inferior when compared to the Primal True Dragon, so he couldn't endure many attacks from Yi Shuihan.

Yang Ye walked over to Oxxy, glanced at the latter, and then his face turned gloomy.

Oxxy's injuries were probably impossible to heal even with Primordial Violet Energy!

Yang Ye seemed to have thought of something and suddenly looked up into the sky. At this moment, An Nanjing was fighting a few Limitbreaker Realm experts, and she was severely injured too. It could be said that An Nanjing, Jian You, Sword Scroll, and the Primal Vicious Tiger were in a very, very bad state too.

The reason they were still able to hold on was due to the powerful sword formations that Sword Scroll was controlling!

An Nanjing glanced at Yang Ye from the corner of her eye, and then she tapped a finger in his direction. A strand of white energy immediately entered Yang Ye's body.

It was the strand of Eternal Energy!

Yang Ye waved his right hand and sent Oxxy into the Primordial Pagoda, and then he gazed at Snowy, “Go inside and help them!”

Just Primordial Violet Energy alone wasn't able to save Oxxy and the Primal True Dragon! Perhaps it would be possible if the Eternal Energy was included too. However, he wasn't certain if it would work.

Because both of them were really too, too severely injured!

Yang Ye restrained his thoughts and gazed at Erya, “What about you?”

Erya glanced at Yang Ye, and then she kicked the one-armed man, “That old man said this fellow is from the desolate race, and we can't kill him because of that. Big Brother Yang, what do you think?”

Yang Ye was about to speak when the old man suddenly said, “Yang Ye, he's the third prince of the desolate race. You…”

Yang Ye didn't even spare the old man a glance before he looked up at the sky, “Kill him!”

A strange yet ferocious smile arose on Erya's lips, and then she opened her mouth and sucked.

A wave of suction force swept up the one-armed man and sucked him into her mouth!

Just like that, the one-armed man had been eaten alive!

The old man's eyes were filled with horror from the sight of this, “W-Who are you?!”

Erya burped, and then she gazed at the gray robed old man, “Old bastard! If it wasn't for you, Oxxy and that stupid dragon wouldn't have been injured so seriously! I'm going to eat you alive!”

Erya stomped her foot down and transformed into a ray of black light that shot at the old man.

The tombstone was in her grasp!

She arrived above the old man, and then she slammed the tombstone down at him.

The old man didn't dare to act carelessly. He clenched both his fists and slammed them upward.

Two explosions resounded, and the old man was blasted away.

Erya didn't stop attacking, and she charged at the old man.

Meanwhile, Yang Ye moved his gaze away, and then he appeared before Yi Shuihan.

She glanced at him and said, “You've obtained a divine sword. Not bad, not bad. You're much stronger than before. Come, let me see how monstrous you are. You…”

Her voice stopped abruptly, and then she clawed forward with both hands.

They were Yang Ye's flying swords!

They were of no threat to her!

Yi Shuihan hurled them, and they instantly transformed into rays of light that shot back at speeds that were even slightly faster than when they shot at her!

Yang Ye's expression remained unchanged as he took two steps forward. Meanwhile, the Sword Gourd on his waist trembled slightly, and then the swords were sucked into it.

She stopped and continued, “Yang Ye, the Immortal Estate I established was destroyed at your hands. I'll make you pay a hundredfold for that!”

She closed her eyes slowly once she finished speaking, and then the entire world suddenly turned ethereal.

The strength she revealed wasn't something Eternal Border could endure!

It was sufficient to destroy the space and all Laws in Eternal Border!

Right at this critical moment, Yi Shuihan suddenly opened her eyes, and then she looked up. She seemed to have seen something, causing a ferocious and insane expression to appear on her face. After that, Yang Ye watched with astonishment as her figure vanished on the spot.

Yang Ye was stunned. She ran away?

She just ran away like that? What the heck?

Yang Ye frowned. Quite some time passed before he decided to ignore her since she still hadn't returned, and so he gazed at An Nanjing.

At this moment, An Nanjing was being surrounded by around eight experts, and she was being pushed back repeatedly. Moreover, she'd suffered quite a few injuries.

His eyes opened wide while astonishment filled them.

It was so fast he hadn't been able to react before he died!

After he killed that expert, another flying sword flashed, and then the head of another expert flew up into the air on An Nanjing's right!

Yang Ye had instantly taken two Three World Realm experts by surprise and killed them! At this moment, the experts in the sky moved their attention over to Yang Ye.

Yang Ye appeared by An Nanjing's side, glanced at her, and said, “Can you still fight?”

She glanced at him, and then she charged at a Three World Realm expert.

Yang Ye vanished on the spot.

At a boundless expanse of the void, Yi Shuihan dashed swiftly, and she was so swift that space collapsed in her wake.

A long time passed before she stopped, and a petite young girl stood not too far away!

The young girl had her hands behind her back and was looking up at the endless starry sky.

Suddenly, the young girl turned around and gazed at Yi Shuihan, “Are you looking for me?”