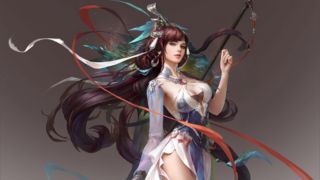 With Wu Ren Wang right before him, Su Mo grit his teeth and flew forward to meet his enemy. At the same time, he immediately increased the force of the Heaven Combining Ghost Realm to its maximum. His body seemed to become a Ghost void, as rolls upon rolls of Ghost Qi poured out from him and spread out in all directions.

“Just some Ghost Skill and you want to fight back against me. You don’t know your place!” laughed Wu Ren Wang coldly. He had two Fighting Souls, an outstanding body constitution, and very strong fighting strength. There was no way he feared Wu Chen’s Ghost Skill.

The large and boundless fist force had morphed into a large tiger’s head that was a hundred feet long. With a fierce roar that shook the skies, it instantly broke through the Heavenly Combining Ghost Realm as it pounced towards Su Mo. Wu Ren Wang did not slow down and followed closely behind the fierce tiger to rush past the Heaven Combining Ghost Realm.

Su Mo’s eyes sparkled, this was the perfect opportunity for him. He had been fighting at a distance, but he still had not used the Dream Realm Fighting Soul. Now that Wu Ren Wang was closing down on him, it was a perfect opportunity to end the battle. His body transformed into a shadow as it blinked rapidly within the Heaven Combining Ghost Realm, easily avoiding the fierce tiger’s pounce.

Then, time seemed to stop.

Su Mo’s body stood upright and he didn’t move. Wu Ren Wang also stopped moving completely, almost as if he had been petrified. The two of them were bound within the Heaven Combining Ghost Realm, which rolled out as a continuous stream of Ghost Qi.

Not far away, the key elders who had been observing the fight also wore confused expressions on their faces, none of them understanding what had happened. Although Ghost Qi rolled out in waves within the Heaven Combining Ghost Realm and it had turned into a pitch black prison, the elders were still powerful individuals who could see what was happening in the realm. The two men inside the realm seemed to have turned into statues.

The spectators were confused, what was going on?

“Fourth priest, what do you think?” asked the Grand Priest, wearing a calm expression.

“This Wu Chen isn’t simple!” the fourth priest continued, “There are two possibilities. The first is that Wu Chen has another willpower related to his Fighting Soul aside from his sword based Fighting Soul. The other is that he has cultivated a very strong Willpower Soul Skill.”

The fourth priest had a very good eye and was very knowledgeable. He could clearly feel some willpower-based force within the Heaven Combining Ghost Realm. Although this force was weak, and it was within the chaotic Heaven Combining Ghost Realm, it could not escape his eyes. This force most likely came from a Fighting Soul. Either that or it was a Willpower Soul skill.

A Willpower Soul Skill was an attack that required one to focus their willpower. Other willpower-based attacks included Willpower Offenses and Willpower Illusion.

“Mmph!” the Grand Priest nodded his head slightly. He was surprised, but interested, this Wu Chen had a lot under his sleeve. A top talent who was previously unknown among the tribe, he had really kept himself well hidden.

In a dark room.

Wu Ren Wang’s hands and legs were tied tightly to a large frame made of white bones. With a pair of cold eyes glaring at him, Su Mo stood before him.

“Where is this place? What is going on?” questioned Wu Ren Wang in a loud voice, a stupefied expression across his face.

A moment ago he was rushing towards Su Mo, then everything before his eyes changed and he found himself trapped and bounded in this room.

Within the dream realm, he could not destroy his enemy’s body but could torture his enemy’s willpower and mental strength, and thus completely destroy him.

“How could this be?” Wu Ren Wang loudly shouted. He could not believe it and glared with daggers in his eyes at Su Mo. He shouted, “Wu Chen, you think you can bind me here with your puny willpower illusion? Go and die!”

With that, Wu Ren Wang concentrated his willpower and tried to break free from the dream realm.

The dream realm room immediately started to shake as if an earthquake was occurring. Su Mo’s eyebrows raised in surprise. His willpower was much stronger than Wu Mo back then and he could release and control the dream realm much better than his former opponent.He had not imagined that despite this, Wu Ren Wang would still be able to shake the dream realm. Of course, this was also because Wu Ren Wang was a Level 9 Martial Emperor and his willpower would be much stronger than a Level 3 Martial Emperor.

Without any hesitation, a sharp dagger that dazzled brightly appeared in Su Mo;s hands. Everything here was pretty similar to when Wu Mo had dragged Su Mo into the dream realm during their battle. Yet, Su Mo wasn’t very familiar with the Dream Realm Fighting Soul. Hence he had continued to rely on Wu Mo’s methods to go against Wu Ren Wang.

“Wu Ren Wang, I will let you taste how it feels like to be dismembered!” Su Mo laughed coldly before raising his hand and striking down. A large chunk of flesh flew from Wu Ren Wang’s body.

“Ah!” Wu Ren Wang screamed in pain and gritted his teeth. Yet, this also raised his killing rage and hatred within him and he yelled, “Wu Chen, once I break this illusion of yours, I will definitely burn you alive!”

Wu Ren Wang desperately concentrated his willpower and tried to break through the dream realm. His efforts caused the room to shake even more violently.

“You don’t have any more chances!” Su Mo did not stop and continuously sliced down with his dagger.

Pieces upon pieces of flesh flew forth as blood poured out from Wu Ren Wang. It was completely ruthless. This scene was shocking, Su Mo repeatedly used the dagger in his hands to cut off piece after piece of Wu Ren Wang’s flesh. Every ruthless strike exposed his enemy’s bones.

“Ah ah ah!!” Wu Ren Wang screamed continuously as beads of cold sweat rolled down his forehead. No one would be able to take the sight of his flesh being ripped from his body.

Su Mo was very fast. He was worried that if time dragged on, Wu Ren Wang would really be able to break the dream realm. The dagger in his hands dazzled and within a few breaths, he had completely changed Wu Ren Wang into a torture tool.

Apart from his head, Wu Ren Wang’s entire body had been slashed so much to the extent that he did not seem to have any flesh left. And it seemed as though what was left on the frame was a pile on bones. Wu Ren Wang’s internal organs were completely visible, they were exposed to the cold air.

“Wu Chen, I want to kill you!” Wu Ren Wang continued to scream angrily. However, his voice had already became very weak.

“Wu Ren Wang, you are my prisoner now and your life is in my hands. You still dare to shout!” A cunning smile played at Su Mo’s lips as he continued, “You still dare to call yourself unrivalled? Bullsh*t!”

Su Mo sneered at Wu Ren Wang, destroying his ego. He wanted to destroy Wu Ren Wang’s will and completely crush him. Anyway, the injuries that Wu Ren Wang sustained weren’t real. It was just a dream and his real body had actually not suffered any harm, but his mind was breaking!