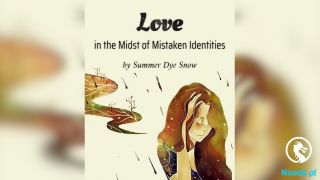 “Are you spying on me, sister?”

“…No. You’re literally in front of the house. I saw you from the cameras.”

“That is called spying on me, sister.”

In front of the Ross’ Residence, Riley’s foot was about to step inside their house; before he could do so, however, Hannah suddenly landed on their front lawn. They used to be very careful with showing their abilities in the neighborhood— but ever since it was revealed that Bernard Ross was Whiteking, some of their neighbors left in fear for their lives due to all the villains that would probably target him.

But then Riley Ross was revealed to be Darkday, that’s when their entire subdivision decided to clear out. The owner of the subdivision didn’t mind, of course… because the owner was Bernard Ross himself, just registered in a completely made-up identity.

And so, with everything already out there, the need for pretense was over.

“I’m not fucking spying on you, the cameras are connected to my phone!” Hannah could really only roll her eyes as she approached Riley, “What are you doing here? Shouldn’t you be locked up with Silvie?”

“I am still with Silvie, this is a clone,” Riley glanced at Hannah for a few moments, before shrugging and entering the house, “She says hello, by the way.”

“And what are you doing here?” Hannah repeated her question as she too rushed to enter the house.

“Stop fucking around, you know what I mean,” Hannah once again rolled her eyes as she followed Riley around the house as he started walking everywhere, “What are you trying to find!?”

“Father,” Riley casually answered, “I believe I should also ask you the same question, sister. What are you doing here?”

“I just told you I saw you on the cameras!”

“Yes, but why are you here? Were you not just attending Golden Fox’s funeral?”

“I believe this is also the first time in a year that you will be visiting the house, sister.”

“…How would you know that?”

“Because I am spying on you, sister.”

“…Creep,” Hannah scoffed, before finally grabbing Riley’s wrist and telling him to stop, “Dad’s obviously not here. I would have also been alerted on my phone if… no, never mind that. You think he might be in the basement under the bunker?”

“He might be, but we are not allowed there, sister,” Riley nodded as he faced Hannah.

“…Since when did you value other people’s space?” Hannah raised her eyebrow as she started dragging Riley away, “I don’t know why you’re trying to find him, but let’s go— I think it’s time for the three of us to have a real heart-to-heart discussion as a family. All these crazy things have been happening around us that we barely even talk about the elephant in the room.”

“Elephant… are you referring to yourself because you’re gaining weight, sister?”

“Is that before or after pooping, sister?”

“It’s a legitimate question. Did you know that on average, the average human loses about—”

“I don’t want to talk about poop!”

“But you just said you wanted a heart-to-heart talk. Talking about one of the dirtiest secretions from our body is as intimate as—”

The two once again stepped out of the house, making their way to the bunker that was located just a few steps near the side of their home. And as they opened the hatch and started to step down, Hannah could not help but feel… a slight melancholy suddenly wrapping her entire body.

This… is where it all started to change— Megawoman’s supposed defeat from Darkday. Come to think of it, when she fetched Riley from his room that day, was it actually him… or just another one of his clones?

“…” Hannah didn’t really want to find out the answer to that for some reason. And so, she just stood there; standing in the bunker in silence as she just let her mind wonder and wander. It was almost as if she was already living in a completely different world and a different life.

…No. With the aliens finally reaching out to them with intent of diplomacy, Earth truly is a completely different world than what it was before all of the things unfolded. Was there actually a way for things to have not become like—

“Do you know how to get to father’s secret lair, sister?”

And before Hannah could dig through the deepest parts of her imagination, Riley stood right in front of her face.

“…No, I thought you knew?” Hannah’s shoulders dropped as she started looking around the empty bunker.

“I don’t, sister. I would not have called it a secret lair if I did,” Riley looked Hannah straight in the eyes; his face, obviously looking at her as if she was the one loose in the head.

“Fuck you, okay?” Hannah smiled and nodded before she started walking around and tapping the walls and floors.

“…What are you doing, sister?”

“Trying to find a secret button, I don’t know!” Hannah shouted in frustration as she waved her hands around, “Why don’t you try to help instead of just standing there!? Seriously, more than two years and you haven’t changed a single bit!”

“Why is everyone saying I haven’t changed? I believe I did, sister.”

“…You? I specifically remember you not changing your underwear for an entire week because you said you didn’t like the feeling of another underwear!”

“I believe that was a valid reason at the time, sister,” Riley shrugged as he too started walking around the bunker instead of just using his abilities to check around for any switch that may be there.

“It’s fucking disgusting is what it is! Remember when you didn’t want to take a bath for weeks for the nth time!?”

“I didn’t like the feeling of the new showerhead, sister.”

“They are necessary organisms, sister.”

And before the two could continue their senseless talks, a part of the floor suddenly opened up.

And with the two nodding at each other, they completely stopped their conversation and made their way down; with Hannah slightly taking in a small gulp. And although it was not as obvious, Riley’s eyes were also slightly squinting.

Not once, not even once have they been allowed inside Bernard’s secret basement. The two tried several times to find a way to sneak in, but Bernard would always catch them for some reason.

And now… after more or less 2 decades, they were finally invited by their father.

And after taking the stairs for almost an entire minute, they arrived in a hall— a bright basement that probably encompassed the entire area of the subdivision. It looked relatively empty… except for all the weird machinery and suits of armor just neatly scattered everywhere.

“It’s… more boring than I imagined,” Hannah blinked a couple of times; her eyes, still glistening as she continued to look at all the things that were there, “Riley, look! Isn’t that a spear of those blue aliens that invaded us? I wonder what he’s doing with it.”

“He is probably trying to reverse engineer it, sister. Turn it into a weapon that could destroy entire islands in one swing.”

And just like that, the two suddenly became children again; children that seemed to be touring in some sort of museum as their eyes looked everywhere.

“That’s not their weapon, it’s a variant I made that could be used by normal people… just in case.”

It was easy to dismiss Bernard whenever they were surrounded by supers that could destroy mountains with their fists— but in his territory, he truly was quite the presence. Even now, as he approached the two while wearing his superhero uniform, Hannah could feel a certain pride oozing out of him.

That… or because he’s their father.

“…Why are you wearing your Whiteking suit?” Hannah squinted her eyes, “Last I checked, Empress said you’re not allowed to go out there anymore.”

“Ugh, shut up,” Hannah rolled her eyes, “Just so you know, it was Riley’s idea to visit you.”

“Oh?” Bernard smiled, “And here I thought I heard you saying something about heart-to-heart?”

“You were listening in on us!? Of course, you were… Riley got it from you.”

“…That’s not something to be proud of, dad. I… I can’t,” Hannah pinched the bridge of her nose, “Riley, just do what you came here for so we can leave.”

And without even waiting for anyone else to say something, Riley stretched his hand towards Bernard.

“…That is?” Bernard’s helmet folden open as he looks at Riley’s hand; his clearly emaciated eyes, reflecting the red stone that seemed to hold several stars in them.

“It’s a Guardian Force. Be careful, it’s quite heavy.”

“…” Hannah also curiously looked at the stone, somewhat feeling a sense of familiarity with it, “…What the fuck is that?”

“I’m giving it to father. It gives physically weak creatures power, or so I was told.”

“…What?” Bernard leaned closer to the stone; his mask, once again unfolding and covering his face,

“This… the amount of energy it radiates is insane. Just… where did you get this?”

“It was personally delivered to me by a Guardian, father.”

“…What the fuck is a Guardian? Another one of your new alien friends?”

“I don’t have friends, sister.”