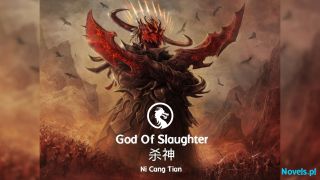 “…You gain the abilities of the one that kills you?”

“Yes, have you tried it before, Karina?”

“This complicates things. If I kill you and you happen to get all of my abilities, then you truly will become like me and start destroying—”

“No! I already told you, I don’t even like it when I accidentally kill insects!”

Although Karina was still completely confused about what just happened, she still slightly backed away as soon as she saw her father suddenly alive and just standing there.

She was sure of it— Riley was just disintegrated and yet… he was here again?

Her mother did say her father had many abilities, was this one of them?

“You… you tried to kill me,” Karina then whispered as she continued to back away, “Now… now I know why they don’t want me to meet you! You’re a bad person!”

“Is there a need to?” Riley only tilted his head, before looking at the ashes of his clone that soon faded and withered away completely,

“I tried to kill you, but you killed my clone. I would say that makes us even, Karina.”

And while everyone was busy watching the scene between the supposed father and daughter, Silvie, who was supposed to be locked in her cell, suddenly arrived at the scene.

“Ms. Silvie?” Princess Vera raised an eyebrow, “…What are you doing here?”

“…Oh, of course,” Vera blinked a couple of times as she sighed, “You… didn’t try to escape?”

“…I am wanted by the law, I must abide,” Silvie also let out a small sigh, “I’m still your prisoner by all means, Princess. But… what’s going on here?”

“I see,” Silvie nodded, before her eyes turned wide, “Wait, what?”

Vera didn’t really answer Silvie anymore and just pointed to what was happening. And once again, Silvie’s already wide eyes turned even wider as she saw the pale, white-haired girl looking at her.

“…” Silvie then turned and started looking back and forth between Karina and Riley— if it wasn’t for Riley permanently dying his hair black, then the similarity between the two will be eerily… uncanny,

“…How? And what was that I was hearing about you trying to kill her, Riley!?”

Silvie then quickly rushed toward Karina, standing in front of her to block her from Riley’s path,

“…You look like one of the visitors that’s been visiting aunt Diana lately.”

“…” Silvie didn’t even need to ask who Karina was referring to as she turned her focus to Riley,

“What are you doing, Riley?”

“I was trying to kill her, Silvie,” Riley answered nonchalantly, “Not anymore, not until I am sure she does not have the same ability as me.”

“…Why would you even do that!?” Silvie raised her voice. The evaniels that were watching on the sides could really only look at each other; some of them, slightly starting to enjoy the drama unfolding in front of their eyes.

“She just wanted to hug you!”

“…So you’ve been listening from the start, Silvie.”

“That… that doesn’t matter!” Silvie once again waved her hand, “Don’t you know what it feels like to be unwanted by your own parents!?”

“No, but I suppose you do,” Riley shrugged before tilting his head to the side to look at Karina, “She is the acquaintance I told you about that knows your situation very well.”

“…” Karina looked at Silvie for a few seconds, before Silvie looked back at her and shook her head.

“I don’t. I am a clone, but she’s obviously not,” Silvie said as she looked Riley straight in the eyes,

“And shouldn’t you already know by now that I have become my own person, Riley!?”

“…” Riley could really only blink a couple of times as Silvie… started to cry out of nowhere even though she just arrived.

“If I, an exact replica of Megawoman was able to live my life as my own… why do you think your daughter, someone who is clearly not a clone, won’t be able to live as her own person? She… she’s literally just a child and she’s definitely not like you, Riley!” Silvie continued her speech as she placed a hand on Karina’s shoulder,

“I’ve only seen her for a minute and she has already expressed more emotions than you have and I have known you for years, Riley!”

“Okay. If you say so, Silvie,” Riley then shrugged as he started to walk away.

“…What?” Karina could not help but raise an eyebrow as she looked back and forth between her father and Silvie,

“How… did you do that?” Her eyes then soon glistened as she looked at Silvie; a few moments later, however, she started to frown,

“Are you one of dad’s other women?”

“Mom said dad has a lot of… side chicks, you’re one of them, aren’t you?” Karina squinted her eyes as she backed away while looking at Silvie from head to toe,

“Not bad. Mom has a better figure, though. You look quite plain.”

Silvie’s eyes started to squint as she heard Karina’s words. Didn’t… she just try to help this kid? So why does it feel like she was suddenly having the urge to hit her head?

“I’m… not one of your dad’s other women,” Silvie then answered, “I… was one of his friends.”

“Dad has no friends, though. You’re a side chick.”

She’s a child. Literally, a toddler— Silvie kept repeating to herself as she calmed her breaths.

“Anyway…” Karina then let out a loud breath as she once again turned to look at Riley as he started to approach them, “…Now that you’re not trying to kill me… can we hug?”

“We already did, Karina,” Riley answered as he just continued to walk past her, “Right before you disintegrated my clone.”

“No,” Riley gently pushed Karina’s face away as she tried to sneak her arms around him, “Please go away, Karina. The people around you are right— you should not associate yourself with me.”

“That rarely matters, Karina. I believe you do not deserve someone that will never truly learn to love you,” Riley shook his head before making his way to Vera and the others, “I suppose I may be your father, but I am not family, Karina…

…the people that have been taking care of you all these years, they are your family.”

“…But I want you to be,” Karina insisted. She was about to follow Riley, but Silvie stopped her.

“That’s because you don’t know me yet, Karina. Not really,” Riley then let out a sigh as he stood in front of Vera; or more specifically, in front of the unconscious Guardian on the floor,

And then, without even any indication he was going to do anything…

…he stepped on the Guardian’s leg— jolting him awake.

And before the Guardian, Ineego, could even have the chance to scream in pain, Riley placed his hand inside his mouth— slightly ripping it open.

“Kh!” Ineego could really only let out a muffled gasp as he looked at Riley. He then quickly raised both his palms and faced them toward Riley’s face; and with a grunt, two blue orbs that resembled the sun emerged from them.

But before the two orbs could really do anything… Ineego’s hands were instantly squashed into a ball— the two orbs, also compressing to oblivion.

“I’m not interested in fighting you anymore, Guardian,” Riley just sighed as he shook his head,

“If my daughter could easily beat you… then I would just be bored.”

And before Vera could say anything, Riley… pushed his hand deeper into Ineego’s mouth.

Everyone could see Riley’s arm slowly disappearing as Ineego’s blue neck started bloat— the sound of his flesh and bone being shattered and pushed away, viscerally snapping in the air.

The hair and markings of the evaniels that were there started to light up, but once again, Vera gestured to them not to do anything.

They just watched as Ineego’s body started to shake and seize as blood started to pour from all the orifices in his body.

Karina could no longer watch the scene unfold as she turned around and started to cry; embracing Silvie even though she didn’t really know her.

And finally, after a few seconds of Riley rearranging the insides of the Guardian, he pulled his arm out. And as soon as he did so, Ineego’s body dropped to the floor; his torso, almost like a wet lasagne as it made a plopping pop.

“Is this it, Princess Vera?” Riley then stretched his bloodied arm towards Vera; Ineego’s flesh and guts, still dripping down from its sides.

“…What?” Vera looked at Riley’s face first in confusion, before turning her eyes to the thing that Riley was holding in his hand,

“Is this the Guardian Force?” Riley asked as a smile slowly started to crawl on his face,

“It’s the only thing I couldn’t break.”

It was a red stone— a stone that looked like it held a collection of stars inside it.

“…Yes?” Vera took in a small gulp, “You… you should put that back, Riley. That belongs to the Guardian Corps.”

“Not anymore,” Riley shrugged before he just casually placed it in his pocket,

“I am giving it to father.”