Yun Yanli’s reaction had clearly shown that he genuinely cared for the young palace master. He did not want to see her die at the very least. He took a quick look at Di Fuyi, and they seemed to have reached a mutual understanding without any exchange of words.

The two of them were both very smart men. Naturally, they understood each other’s positions. Yun Yanli let out a long sigh but was finally ready to compromise. “I can take you there, but you must promise me something in return.”

“When you finally find Zhu Duqing, allow me to join the fight.”

“Are you sure that you are giving yourself a reason to die?”

There would certainly be an earth-shattering battle between Di Fuyi and Zhu Duqing. It would certainly be unsafe for any ordinary people to join. Without an arm, Yun Yanli would be a handicapped fighter. His involvement would spell his inevitable death.

He pinched his lips into a thin line and took a few swings with his left arm. “I did not tell you that I am actually left-handed. I am better at wielding my sword with my left hand. If you do not believe me, we can have a quick spar right now.”

Di Fuyi was reluctant to fight him. The only thing he wanted now was to return to heaven as soon as he could, so he agreed to the condition.

Yun Yanli seemed relieved. “Great. This time, I am coming with you.”

“Master, I shall go with you!”

Feng Ruhuo and her men all volunteered themselves to follow Di Fuyi and assist him in the final battle with the black bamboo man. However, Di Fuyi refused their requests.

These guardians were natives from the Shura World, specifically the Devil Kingdom. They would not be able to adapt to the living conditions in heaven as the celestial aura could possibly be lethal to them.

Besides, Feng Ruhuo dared not go against his commands, so she gave the rest of the guardians a quick, helpless look before retreating.

“Don’t forget me! I have had enough of this lousy place. Master, take me with you,” Kun Xueyi firmly said while stepping forward with Di Hao in his hand. Di Hao was also taking Xie Zhi with him.

Since the gentlemen had reached an agreement, Feng Ruhuo quickly set the young palace master free by unblocking her acupuncture points. The hostage was no longer needed.

“Ming Die, I am no longer your master. You need not follow me around anymore.” Yun Yanli had to make it clear to her once and for all. Unfortunately for her, he was never attracted to the young palace master. She was merely a tool in his plan.

She had always been a loyal companion to him. As time went by, their friendship was slowly built. But friendship was all that he had for her. Moreover, he had failed his mission and no longer had the desire to conquer the world. Hence, he could not fulfill his promise to make her the future Celestial Concubine. It would be better to set her free, he thought.

The young palace master’s face grew pale. She knew how serious Yun Yanli was whenever he made a statement. Although she was unhappy with his decision, she did not refute it. Helplessly, she watched as Yun Yanli performed a spell and opened up a passage to heaven. Slowly, his figure faded in the light until he finally disappeared entirely. The young palace master simply looked down in disappointment with her fists clenched.

“Don’t you want to follow them?” Feng Ruhuo approached her and asked.

“Silly, how can you give up just because of what he said? This is not the right way to pursue a man. You need to pursue the man tirelessly. It is easy for a woman to attract the heart of a man.” Feng Ruhuo said in a comforting manner while playing the role of an elder sister.

“No buts! I just need to know if you want to go after him or not!”

“I want to, but I do not have enough power to open up the passage.”

“It does not matter, as long as you know the way, we can do the rest,” Feng Ruhuo continued to persuade her.

“Hmm… It seems that you are the one who wants to go along!” The young palace master finally realized her intention.

“Smart! We are not doing it solely for you. So, are you in?”

The young palace master took some time to think about the proposition. “Yes!” She finally said.

The young palace master shook her head. “Not now, we need some specific things to activate the passage. I need to collect the materials. Meet me here in ten days.”

As long as they were able to leave the place, the guardians were willing to see out the ten days. 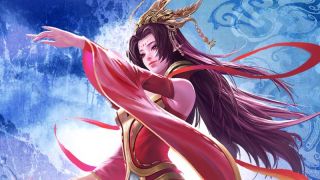