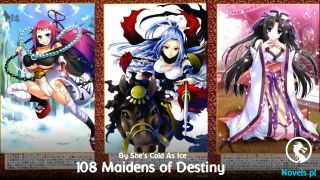 Right at the start, Ji Fengyan had sensed that Liu Huo’s status was special. She had subconsciously taken him to be part of the Blood Clan, but when she knew that Liu Huo and Xing Lou were the same person, Ji Fengyan had completely refuted this guess. Ji Fengyan only realized at that moment that when the Little Bat saw Liu Huo in the past, its reaction had been overly agitated. This should not have been the reaction upon meeting someone from the same race.

“Do you know about the Heavenly Fiend Tribe?” Liu Huo looked straight at Ji Fengyan, having made some kind of decision in his heart.

Ji Fengyan shook her head. This race was too foreign to her. She had never heard of it.

“Tens of thousands of years ago, between heaven and earth, the various major races formed a separate regime and the gods created this world for them. The powerful ancient dragons, the mysterious Blood Clan, and the untiring wights all dominated this world for many years…”

A long, long time ago, when the gods had not yet vanished from this earth, the various races had been restrained by the gods, and coexisted peacefully.

However, with the passing of time, the gods seemed to abandon this large land. The world order descended into chaos. Fights were quietly picked between the races, and the races which had previously coexisted peacefully suddenly erupted in war. Blood stained the ground, and the entire land descended into chaos.

In the long river of history, no one knew why the previously powerful races had suddenly disappeared. As a result, tens of thousands of years later, only the humans and the demons remained as the two major races in the land. They continued to fight unceasingly.

The humans did not know why the demons had set themselves against the humans. It was as if from the day the humans had become sentient; the demons had been their greatest enemy. They were also the only ones that could threaten the existence of their race.

The war between the humans and the demons lasted for thousands of years. The bodies and bones were so numerous they could be piled into a mountain, or used to fill an ocean.

At first, the humans did not have the power to oppose the demons, and suffered heavy losses. Only when the Terminators appeared had the situation turned around.

“A few thousand years ago, the humans and the demons coexisted peacefully. Only the fall of the demon god caused the situation to become what it is today.” Liu Huo said calmly.

The demon god was the greatest symbol of power in the Demon Clan. Its power subdued countless Demon Kings. It was also the demon god’s existence that made the Demon Clan more peaceful by suppressing and restraining their lust for slaughter. As a result, a few thousand years ago, the demons and the humans still had a certain amount of trade and interaction.

However, the demon god suddenly fell, and it threw the unified Demon Clan into terrible turmoil.

Although the demon god was no real god, the Demon Clan had venerated it as a god.

Its fall threw the Demon Clan into chaos. At that moment, the demons discovered that the demon aura was spreading from the areas where humans lived.